Morgan Hill Mayor Steve Tate took the microphone and notified an audience of nearly 300 people: “For those of you who don’t know Mike Cox, you’re going to love him by the end of the evening, guaranteed.” 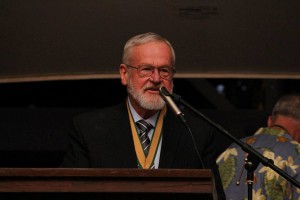 Tate served as the emcee of a July 27 Leadership Morgan Hill dinner tribute where Cox’s friends and family gathered to honor the local scientist and philanthropist who received the organization’s 2013 Leadership Excellence Award.

Stanford Professor Ellen Baron, a close friend of Cox’s, told the audience about how his inventions have had a significant impact on scientifically studying anaerobic bacteria and educating students about these microbes through his Morgan Hill-based company Anaerobe Systems.

“Those are bacteria that do not survive in the presence of oxygen,” she explained. “The anaerobes that he studies lives in our guts and the gingival crevices and all unmentionable parts of people. I don’t know if that says anything about Mike’s interests, but we’re not going there.” As the audience roared with laughter, Baron added, “I wasn’t going to roast you Mike, it just happened.”

Cox combines his love of cooking and barbecuing with leadership and community building, said Sherry Hemingway, a past president of Leadership Morgan Hill. Many people write a check for $2,000 and give it to an organization — an easy way to be a philanthropist. But Cox teams with his wife Mary Cox to create an event that makes that money go much farther.

“Mike and Mary don’t do things the easy way,” Hemingway told the audience. “They take the $2,000, buy food with it and multiply it by 10 with a fundraising event … The Mike and Mary philanthropic model has benefited such organizations as the Morgan Hill Community Foundation, Friends of the Morgan Hill Library, AAUW, Rotary Club of Morgan Hill, the Morgan Hill Historical Society, and many science and education programs.”

Every year, Cox financially underwrites the Morgan Hill Youth Leadership program, Hemingway said. When the young people graduate the program, he and Mary invite all the hungry teenagers to his house for a celebratory lunch of paella and filet mignon.
“Mike’s greatest gift, the one that truly lasts, is bringing people together,” she said. “Mike innately knows that when people break bread together — and hopefully it’s his own homemade bread — there’s an excellent possibility they will bond and unite for the common good. Yes, Mike cooks. But what he really does is build community.”

Amber Thomas, a 2013 Live Oak High School graduate, has spent three summers working at Anaerobe Systems under Cox’s student internship program. She told the audience that Mike not only takes the time to teach the interns, but possesses a passion for pushing them to achieve their full potential.

“Every day, Mike guides the interns to some new discovery, whether it be culturing bacteria, computer aided design, or the fine art of making pizzas,” Thomas said. “It still amazes me that he finds time to answer our constant questions, no matter how busy he is. Mike’s patience and dedication to education is what allows him to exceed the bounds of employer and embody the ideals of mentorship.”

Cox told the audience that he was reluctant at first to join, under Tate’s suggestion, the 2005 Leadership Morgan Hill class. But during his experience in the class, he realized that the program makes a difference in our community and the lives of citizens.

“After I got into it I started seeing a whole lot more depth and I started learning things that I didn’t even know existed,” he said. “I met a lot of really nice people. I got involved in the community. And I can tell you there were multiple great opportunities that are direct results of all of this networking that you suddenly acquire.”