Photo by Marty Cheek
Doug Wright installs the city’s name on a wall in the new Council Chambers.

Morgan Hill residents will next week discover a major upgrade in their local government meeting venue. After several months of renovation work and information technology installation, the new Council Chamber at the City Hall complex will be opened to the public June 4 with a ribbon cutting ceremony right before the regularly scheduled council meeting. 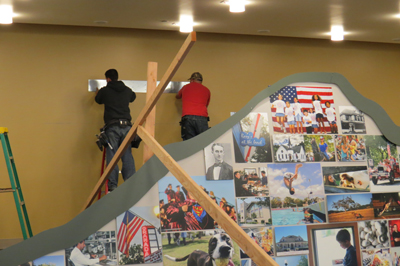 State-of-the-art digital equipment installed in the $2 million Council Chamber project will allow for a more engaging experience for the public as well as helping elected officials receive information to decide on issues, said Julie Behzad, senior engineer with the city of Morgan Hill who oversaw the remodeling. Locally-owned Weston Miles Architects designed the chamber.

“The council and everybody realized that the existing council chamber was antiquated,” Behzad said. “And we needed to upgrade the technology that we have. The technology that we’re going to be upgrading with the new audio-video system, that definitely will enhance the public meeting experience.” 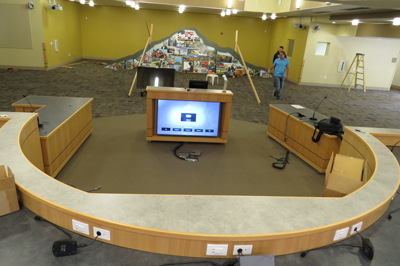 The new “smart lectern” system installed in the speaker podium will give presenters the ability to be able to view a monitor that can be connected to digital equipment such as a laptop computer, smart phone or Blu-Ray/DVD player, she said. A touch-screen will enable speakers to provide annotation of maps, photos or documents during a presentation to highlight key points during a presentation or discussion with the council or committee. Information on the podium monitor will be shared to the public on three large screens in the Chamber, including an 18-foot LCD panel set directly behind the council dais.

“Overall, it enhances the experience so that the meetings will be more effective,” Behzad said. “The quality of the video will definitely be improved. The updated technology also helps with the broadcasting of what’s going on at the council meeting to the public (on government channel 17) as well as people who are attending the meeting.”

One criticism of the old council chamber was that the chairs for the public gallery were uncomfortable and closely packed together, making meetings more tedious for citizens who attended. The new chamber will include chairs ergonomically designed for comfort, and the additional space will mean that people will have more elbow room during meetings, she said.

Decorating the back wall of the chamber will be a large photographic mural made as the class project for last year’s Leadership Morgan Hill class. This was recently taken down from the Centennial Recreation Center’s lobby where it was temporarily placed.

To maximize its public use, the new council chamber will be available for use by organizations for events such as church services or company meetings, said Maureen Tobin, communication and engagement manager for the city.

“This space will be another rentable space in our pool of public rental spaces for meetings, for churches, anyone who is interested n this type of setup,” she said. “The chairs can be set up in all different ways.”

Jeff Rosenberger, information services manager for the city, is excited about the potential for the Crestron technology in the chamber that will open up the room’s use not just for public meetings but also for private organizations.

“There’s a lot of cool stuff,” he said. “Why we included the additional cost of the smart graphics and the Crestron programming is so that it would be simple enough that it wouldn’t necessarily have to have staff there and training. Somebody could just basically come in, plug (their devices) in, turn it on and use it by pushing a button.”

A new cable-TV broadcast control room in the chamber will make it easier for a technician to manage the video and audio feed into Channel 17, the government channel in Morgan Hill that lets people watch live broadcasts of council meetings on the Internet or on TV sets, Rosenberger said. In this control room, a series of consoles on a virtual screen system connected to cameras and the smart lectern system in the new chamber will enable the technician to more effectively broadcast video and audio to the public as well as digital presentations being shown on the chamber’s LED screens.

“He’ll have monitors for seeing the different types of things that are going on,” he said. “He’ll be able to queue up the next video.”

Private users such as a corporation could use the chamber’s technology system for broadcasting meetings or webinars live on the Internet, Rosenberger added. This ability can add to the chamber’s rental value.

“It doesn’t currently have the ability,” he said. “That functionality is designed there, but we haven’t yet taken it to the last step of being able to say ‘push this button, type in this streaming URL and you’ll be able to broadcast it out.’ But all of the pieces are there for us to do that. We wanted to make sure with the design that we would be forward thinking enough that we would be able to capture those kinds of things.”