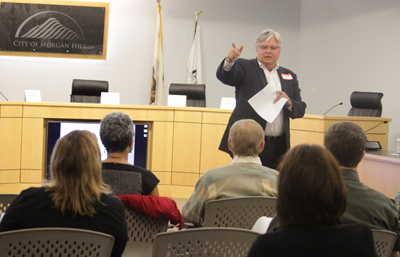 Bob Martin conducts the Morgan Hill Leadership Class of 2014’s Media Day in the city’s newly renovated council chambers. The class learned how the media works and how to effectively interact with the press. Photo by Liza Garabaldi

In enhancing the quality of life within the South Valley community, communication is key. Nonprofit organization Leadership Morgan Hill helped its students at its June 18 Media Day class realize the power of mass communication when sharing a message through radio, TV, print, and Internet news sources.

Media Day is part of Leadership Morgan Hill, a nine-month program that develops future leaders for Morgan Hill and introduces them to various leadership opportunities within the community, said Bob Martin, an organizer of the one-day media class. The class is designed to give students specific skill sets so that they can interact with the media to their advantage when they become leaders of community organizations and nonprofits, he said.

“Media enables us to have a one-on-one conversation that amplifies it to thousands… so we can relay our message to thousands,” Martin said. “I think that media is very important on still informing the electorate and creating a functioning democracy, and I think we lose sight of that sometimes. It’s still very important to get these diverse points of view so that as a voter I can make decisions or as a person involved in the community, I can focus my attention on things that matter.”

Martin has been part of the media class for the last 13 years. The fact that he travels annually to Morgan Hill from Liberty, Mo., specifically for this class shows his that he is committed to teaching Leadership Morgan Hill students what the power of news can do for a community.

Martin is a journalist who describes himself as going over to “the dark side” when he found a career in marketing. He worked for the Thomas Kinkade company, a commercial arts business which was once based in Morgan Hill.

“When I was in the class there was an open invitation for people who had a particular passion or interest or skill to get involved with various curriculum,” he said. “I raised my hand and said I would love to get involved in the media side of it.”

Susan Karajewski, a 2014 class member, got involved with Leadership Morgan Hill through contacts from her job at the South County Catholic High School. The Media Day class opened her eyes to the impact of communication in the South Valley.

“I think from a small community standpoint, people are just a lot more informed than they used to be,” she said. “I think the information tends to be more accurate, but I also think there’s a lot of information overload.”

The media class watched a video called ‘Look Up’ which was about “putting down your device,” Karajewski said. “It’s something we need to focus on with our kids, for sure, and ourselves.”

Another 2014 class member, Katie Garcia, who works for Heritage Bank of Commerce, got involved with Leadership Morgan Hill to get more involved with the community.

“This is building my (leadership skill-set) portfolio and really making some contacts with key people,” she said. “I’m learning something about myself.”

The morning session of Media Day consisted of a panel of local journalism industry professionals answering questions from class members about local news and coverage. Garcia learned much from the panel about the impact of media, “where it’s gone from years past, where people relied on traditional print and their newspaper coming daily or weekly, and our mass media (now), and how it impacts everybody.”

Businesses, families, and local government are now influenced by the widespread media, she said. “I remember when it was all about print and that was the only way to get your news other than watching it on TV at night,” she said. “Now it’s everywhere, which is a blessing and a curse.”

Leadership Morgan Hill Facilitator Theresa Kiernan is a graduate of the 2007 class. She said she is overwhelmed by the way the media arena has changed and she can’t keep up with social media such as Facebook.

“I go out there because that seems to be the only way I can keep track of what’s going on with my friends,” she said. “(The problem is) we’re so busy with our devices that we don’t take the time to look up and engage with people and build our relationships with friends and family. It’s been hard for me to transition from having a one-on-one to this new phase where everybody wants to use Facebook or Twitter to keep in touch.”