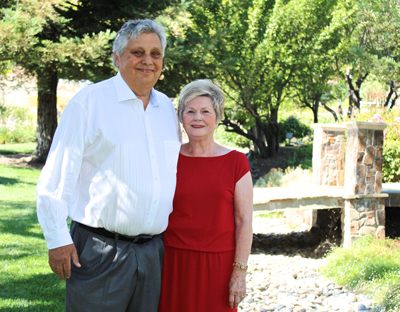 George and Alice Chiala take in a quiet moment prior to the Leadership Morgan Hill LEAD award gala held July 12 in his honor.
Photo by Liza Garibaldi

George Chiala found himself the center of praise for his philanthropy work over the decades when he received Leadership Morgan Hill’s prestigious Leadership Excellence Award July 12. At a gala outdoor reception at the Castillo’s Hillside Shire Winery, Chiala was toasted by  friends and family who heard humorous and touching stories about the beloved South Valley farmer.

Owner and general manager at Uesugi Farms Pete Aiello served as the emcee of the event, telling a comical story involving his father Joe Aiello’s first farm job working for George and George’s at the Chiala family farm in Morgan Hill in the early 1970s.

“One of the funny things that (Joe) always tells me is how George would tell him how to do something, and he’d start doing it,” Pete told the guests. “Two minutes later, the old man would come by and ask, “What are you doing that for?’’

“‘George told me…’” the father tried to explain.

“I don’t care what he told you, do this,” George father told Joe.

“So he’d start doing that,” Pete related. “George would come five minutes later and ask, ‘What are you doing? I told you to do this.’ Anyway, that’s how we Italian farmers work. It’s part of the deal.”

Jennifer Scheer, the former executive director of the Santa Clara County Farm Bureau, told guests that Chiala is well respected in the local agricultural community for seeing farming as a dynamic industry where farmers have to change with the market.

“One of the things that makes him a leader in the agricultural community is the fact that he’s so progressive and always looking forward to the next thing,” she said. “I consider George to be a very flexible and open minded person who is always seeking innovation. He doesn’t wait for it to come to him but he goes out and seeks it and tries to find the next big thing.”

George Chiala Farms produces about 60 million pounds of produce every year, and despite this prodigious output, it serves as a model for environmentally-responsible farming, Scheer said. The business was recognized by the Monterey Bay National Marine Sanctuary for its innovative use of drip tape to reduce runoff when watering crops.

Michelle Averill came to know Chiala well when she served as the chief executive officer and vice president of development at the Saint Louise Hospital Foundation, on which Chiala served as chair of the board. They first met a decade ago when the hospital was going through a difficult “transitional” situation.

“George is an eternal optimist,” Averill told guests. “He has an uncanny ability to see the good in everyone and everything. He didn’t jump ship when the waves got rough, but continued his unwavering support of the hospital. And personally he encouraged me every step of the way. George is always the first person to support a cause or need or someone in their time of need and helps support solutions for challenges. He is a solution visionary.”

Chiala has played a key role in developing various programs in the Morgan Hill region such as the Learning and Loving Education Center, the California Youth Soccer Fields (which evolved into the Outdoor Sports Center), and the South County Catholic High School. He also served for several years on the board of St. Catherine’s School in Morgan Hill. Chiala also created an amnesty program that helps his workers gain documentation and start on the road to citizenship, Averill said.

“A beautiful part of George is that he is a dreamer,” she said. “When he shares a new idea or plan and expresses his enthusiasm for the project, you can’t help but jump on board and support him, no matter how crazy the idea might seem at the time. You just want to see the vision come to fruition.”

Chiala’s efforts in making the world a better place were made possible by his close partnership with his wife Alice Chiala, she added.
“In celebrating George, I think it’s also important that we recognize Alice. Without Alice’s backing, George would not have the time or support to carry out all the amazing work he’s done for the community. So cheers to you, Alice.”

In receiving the LEAD honor, Chiala told guests: “Wow. I’m overwhelmed. I love this community. It’s a community of sharing. And it’s a community of consideration for others. And I’m really proud to be able to receive this award.”