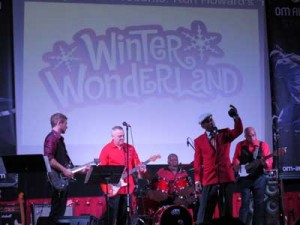 Photo by Marty Cheek
Ron Howard and his band performed recently at the Granada Theater.

Downtown’s Granada Theater faced a deluge last month. With the winter rain hitting the South Valley region, the storm drains plugged up outside, building up a flood. And when it broke Dec. 6, about 15 inches of water rolled into the theater during a church service. Volunteers quickly cleaned up the mess, preventing damage to the floors, just one more demonstration that Morgan Hill residents care about the Granada.

The last 12 months have been an inspiring time for the 63-year-old building. To twist a famous phrase from the film “Field of Dreams,” if you remodel it, they will come. And increasing numbers of audiences have been coming to the Granada Theater, which is now enjoying a renaissance as a downtown cinematic arts and live performance venue thanks to the efforts of the Morgan Hill Granada Preservation Society.

But the iconic theater faces an uncertain future in 2015. Its fate might rest on the potential decision a downtown developer might make concerning the parcel of property it sits on that includes the Downtown Mall and the Morgan Hill Cigar and Wine Company next door.

“We’re trying to make it an attractive place for an investor or a group of investors to come in and help revitalize the Granada Theater,” said David Pyke, a member of the preservation society which has spent hundreds of volunteer hours trying to bring the Granada back to its former glory and make it once again an entertainment center for downtown. “The people who have lived here for a long time have fond memories of the Granada. And every time they come in they share their memories – such as they met their wife there. There’s a lot of nostalgia here.”

David’s wife Tracy Pyke has also been active with the preservation society and hopes that a developer might see the potential of the Granada as a venue for the community to create a nonprofit arts and entertainment center that can be used by individuals, local companies and nonprofit organizations to do fund-raising events or provide arts and lectures to educate residents.

“My vision is that I would see them remodel and retrofit (the building) and do whatever they need to do to keep the Granada,” Tracy said. “It can still be an anchor-point in the middle of the city. We know the building is leaking, we know it has (structural) issues. There’s lots of things going on with it. But they could do something to keep the Granada there. I mean, it’s the last of the Art Moderne buildings that has ever been built. It’s got a lot of history with a lot of people who have lived around here. It would draw a lot of people here.”

Despite the many hours of work being put into the Granada by the preservation society volunteers, a cloud of uncertainty looms over the fate of the theater. The city now manages the Granada as part of the Economic Development Corporation, which took over from the Redevelopment Agency. The EDC put the theater and adjacent property on the real estate market, so there is a potential that a developer might buy the property and tear the building down and replace it with another business. 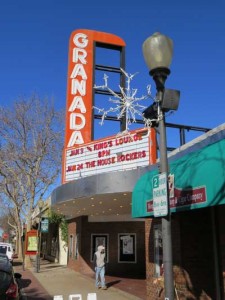 Photo by Marty Cheek
A pedestrian walks under the Granada Theater’s iconic marquee. The downtown theater underwent a restoration in 2014 that was organized by the Morgan Hill Granada Preservation Society.

The first Granada Theater was built in the 1920s and is now the site of The Hill Bar & Grill. Morgan Hill’s second Granada Theater opened June 22, 1951 with 650 seats. It originally had a full stage area that often served as a live theater and was also used for church meetings. In 1980, the theater was “twinned” to include two auditoriums for movies. The north-side auditorium is now using for concerts and live performances and the south-side auditorium is used for movies projected with high-definition projectors on the screen by Blu-ray players.

The preservation society took control of the theater Dec. 1, 2013 with a one-year lease it signed with the city. During 2014 it worked with construction and plumbing crews to bring the restrooms up to the American with Disabilities Act code, a mandatory requirement before the theater could be used for screenings of movies and cultural arts performances. The preservation society is now on a month-to-month lease with the city.

Since August when the Pykes became involved, the preservation society has built up the public awareness that the Granada is now open for public enjoyment of old and recent movies as well as musical and comedy entertainment.

“In any business you have to have a consistent message because then your audience gets familiar with it,” David said. “So what we’ve tried to do is brand the Granada in such a way that it brings back the original character of the theater and also brings it into a modern way. Because of our budget concerns we’ve had to do things a bit more simpler, the style of our graphics in black and white, but the style that we have reflects the value that we bring to our community.”

The theater is also rented out for special programs such as church services or showings of films for nonprofit fund-raising endeavors.

“We’ve had a lot of grassroots and word of mouth such as working with the renters, the people who are coming in who are using their circles of influence to get the word out,” Tracy said.

The Granada is starting to bring in the crowds to watch films. On Saturday mornings, up to 30 people come to watch cartoons, many of them children wearing pajamas and enjoying breakfast cereal sold at the concessions counter. Sports events on the big screen are another popular attraction. During the World Series, Giants baseball fans came in to watch the playoff games and the final game of the series. With the football season, fans came in to watch gridiron games. The Granada has plans to show the Super Bowl live.

“There’s a lot of fans of both the 49ers and the Raiders in this town,” David said. “People like to go see football, especially on the big screen. It’s a nice venue because it’s not a bar. If you want to bring your family out or the baseball team or a group of young people and want to see the Niners game without going to Santa Clara and paying a fortune in tickets, come to the Granada, it’s free. That’s been a very popular feature for us.”

The Poppy Jasper Film Festival organizers have also shown movies on the screen such as a Halloween classic “House on Haunted Hill” and this year’s offering of a Warren Miller ski movie that filled the auditorium with fans. A “Holiday of Soul” concert with performances by blues musicians Miles Schon and Ron Howard brought Christmas cheer to the audience. The Morgan Hill Wind Symphony recently rented the theater for a free performance and packed the house.

“They passed the hat around so they could get new sheet music, and everyone had a wonderful time,” Tracy said.

A big part of the Granada’s success is its involvement of volunteers – called “supporting cast members” – who help out with the concessions and other activities. Many students from Live Oak and Sobrato high schools get involved to put in their community service time.

“When our cast members come in to work their shift, they can choose from a pool of name tags of classic movie stars such as Judy Garland, John Wayne, Audrey Hepburn, Groucho Marx,” David said. “It makes it fun for everyone. We’re not just showing a movie, we want to give our audience members an experience – something that will bring them back again or they’ll tell their friends about it.”

The re-opening of the Granada has created a sense of nostalgia for Morgan Hill residents, Tracy said.

“People often come walking in off the street and start to reminisce,” she said. “We get a lot of people who start telling us, ‘Wow, I met my husband here and we’re still married,’ or ‘I had my first kiss here’ or ‘I had my first job here.’ People tell us this all the time.”

The bursts of recollections of the past are so popular for people who come in that the Granada has set up a Post-it note wall where people can share memories. And word of mouth is starting to bring people in to create new memories with their friends and families, Tracy said.

“The biggest obstacle is that people don’t know we’re now open,” she said. “So we’re working hard to let people know. We don’t want to be the Cinelux. Want to be the place where the community can come and put on fund-raising events and enjoy movies.”