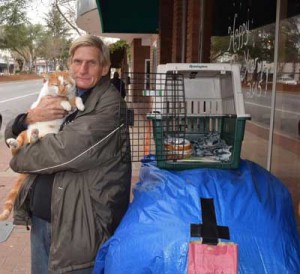 John Cary has seen more downs than ups in his life. Alcoholism and substance abuse at an early age got him thrown into juvenile hall and county jail numerous times before he joined the U.S. Army. Despite his peace time stint in the service, when he got out things just escalated, he said. He was depressed and had no respect for himself or others.

“I was in and out of jail,” he said. “All the stuff that goes along with alcoholism; the things I did were deplorable.”

Born and raised in Seattle, Wash., Cary, 57, started hanging out with his older brother. He took up smoking when he was 7 and then started smoking marijuana and drinking shortly thereafter. He was heading down the wrong path.

“If I’d only listened to my mom when I was younger, things might have turned out different,” he said. “She use to say, ‘If you keep hanging out with your brother and his cronies you’re gonna end up in trouble.’”

Even his stint in the Army did little good. He and a friend joined the military to get away from their habits, but his disease followed him into the service.

He was an air defense artillery man, firing rocket launchers held on his shoulder. “There was not much use for that when I got out,” he said.

After years of anti-social behavior, Cary finally made the choice to quit using drugs and drinking. In December 1982 he sought treatment and was clean and sober for almost five years, then lapsed for about three years. When he moved to Morgan Hill in 1995, he had been sober for about five years.

In 1996, he relapsed for four hours. As he was riding his 10-speed bicycle back to San Martin after drinking, Cary was struck by a car. That accident prompted him to finally get his life together. He has now been “clean and sober” for 18 years, he said.

When he first moved here, he lived in a trailer in San Martin, working part-time doing construction, janitorial, landscaping and other odd jobs. From 2001 to 2006, he worked at the San Jose Mercury News in the product distribution center, before he was laid off. More recently, he took care of the Grange Hall for about seven years and lived there until he was given a 30-day notice to move in November 2013.

Now, he can be seen pushing his meager belongings and his short-haired tabby Sunrise in a tarp-covered cart. Friends call him “Johnny.”

In addition to all his other part-time work, he has been keeping the downtown clean since 1996, clearing leaves, washing windows, taking out garbage and other odd jobs. “I’d rather have a hand up than a hand out,” he said. “I want to work.”

Morgan Hill Chamber of Commerce Board Chair Rich Firato has hired him the past few years to help at the Friday Night Music Series each summer. Cary also volunteers his time at the annual Taste of Morgan Hill and the Morgan Hill Mushroom Mardi Gras events. His sponsor taught him to give back and when he arrived in Morgan Hill with plans to continue south, he fell in love with the town.

“I have no more hate and animosity,” he said. “I’ve learned it’s not what I take out of this world, it’s what I give back.”

He sponsors about half a dozen other people in recovery and he attends the Morgan Hill Presbyterian Church and a Bible study program when he can.

On Feb. 14, 2014, he suffered a minor stroke in his sleep. It left him with numbness on his left side. He still suffers from back problems as well.

“Everyday I try to find some work so I can get something to eat,” he said. “I’ve been overpaid by God’s grace. I’m not the person I used to be. I’m always thankful for what I have, not for what I don’t have.”

• “I’ve been overpaid by God’s grace.”
• “I wasn’t using good judgment. Good judgment comes from experience and experience comes from bad judgment.”
• “I have no more hate and animosity. I’ve learned that it’s not what I take out of this world, it’s what I give back.”
• “I need to keep that plug in the jug.”