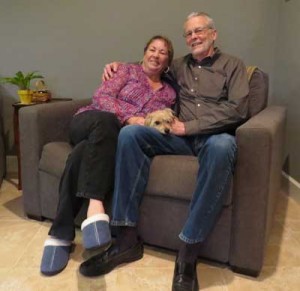 Photo by Marty Cheek
Dana Ditmore, right, with his wife Elaine relax in their Morgan Hill home. Ditmore was recently honored with the LEAD Award.

Dana Ditmore was relaxing at his Morgan Hill home when the city’s Director of Public Works Karl Bjarke phoned and asked if they could meet at Guglielmo Winery to discuss an “important matter.” Ditmore lived only a mile and a half away from the winery so was soon entering the tasting room. And there he found not just Bjarke but other members of the Leadership Morgan Hill group waiting in surprise for him. The “important matter” meeting had been a ruse.

“‘Actually, we called to tell you that you’re this year’s LEAD honoree if you will accept it,’” Ditmore recalls Bjarke telling him. “I told them that I didn’t feel as qualified or as deserving as (past recipients) George Chiala and Mike Cox.”

This year’s Leadership Excellence Award Dinner will be held July 18 at Guglielmo Winery to honor Ditmore for his many years of serving the Morgan Hill community as well as his involvement with various Silicon Valley groups that promote education and children’s health.

“Dana has a long history of philanthropy and volunteerism in the Morgan Hill area,” Bjarke said, explaining why Ditmore was selected for the annual honor. “He exemplifies what Leadership Morgan Hill is looking for in that he gives back and he truly loves the community and is involved in the community and this is something he’s been doing for many, many years.”

Ditmore sits on the boards of several nonprofit organizations in the region, including in past years on the Leadership Morgan Hill board of directors.

He stays involved with the Rotary Club of Morgan Hill as well.

“He’s pretty well established in Morgan Hill with his charitable giving and volunteering and everything we look for in leadership,” Bjarke said. “My experience with him is that he would do anything for anyone in the community if it’s for a good cause. He’s always there and reliable. He’s a very friendly, affable guy.”

Ditmore also has a humble personality and a great sense of humor and is very involved with his wife Elaine Ditmore in raising their six children: John Ditmore, Christopher Ditmore, Donna Ditmore, Juli Hall, Kelli Archbold, and Alicia Albanez (the last three are adopted children of Ditmore’s deceased sister Donna). The couple also stay active in the lives of their 20 grandchildren.

Ditmore, 74, was born in Bakersfield. He attended Lincoln High School in Stockton where in 1958 he was in the first graduating class. Elaine, who was several grades behind him, was pals with Ditmore’s sister and the two got to know each through that friendship. She remembers the youthful romance, spending time on her home’s front porch and breaking up at Ditmore’s joking during long conversations. 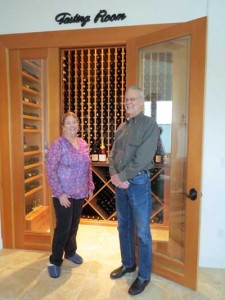 Photo by Marty Cheek
The Ditmores in front of their fine wine collection in their Morgan Hill home.

“My mom use to tell me, ‘Stop laughing, turn off the light and come into the house,’” Elaine recalls. “He’s got a great sense of humor. He’s really goofy. I call him the cornball express,” she said, describing the qualities in Ditmore that attracted her to him.

Over the years, Elaine has seen her husband take on the various leadership roles that helped him earn the LEAD honor, she said.

“He makes a lot of things happen,” she said. “He’s really good at getting the right people together whether it’s personal or, most often, it’s professional. If it’s a difficult work situation, he’s really good at helping people to succeed. If he doesn’t, they’re usually a lost cause.”

Ditmore’s advancement in his education and career started by attending Stockton Junior College (now San Joaquin Delta College). From there, he transferred to University of California, Berkeley as a junior where he graduated with a degree in mechanical engineering.

He immediately went to work for General Electric’s nuclear equipment division in San Jose. GE had an advanced engineering program to teach engineers how to design equipment and so sent him back to university for his masters degree.

He worked for GE for 17 years. In 1979 the company transferred him to Applied Materials (a company in which GE had major stock holdings) in Santa Clara to serve as the new vice president of engineering. Ditmore stayed at Applied for 17 years, and then he retired “for the first time.”

His former boss at Applied became the president of LAM Research and so in 2000 Ditmore began working there and at several other Silicon Valley companies as a consultant.

During his professional career as well as in his retirement years, Ditmore became increasingly involved with helping nonprofit organizations.

“Our CEO (at Applied) Jim Morgan and his wife Becky Morgan were very community oriented and they encouraged all of us executives in outreach and helping the community,” he said. “And one of the things I was asked to do was develop a relationship with the College of Engineering at San Jose State because we used their engineers.”

He became involved with the university in 1983 and stays active in the advisory council for the College of Engineering.

The role led to his being asked by the university’s president to join the board of directors for the newly-formed Tower Foundation involved in fund raising and other activities. Ditmore also serves on the advisory council for California Polytechnic State University’s engineering department.

He has also been involved for many years on the Synopsis Outreach Foundation which supports teachers and students with science curriculum. While with Semiconductor Equipment and Materials International, a trade association for chip-making manufacturers, he developed a “High-Tech U” program for middle schools to encourage local young people to learn about technology.

He raised almost $3 million to support this Silicon Valley endeavor that encourages young people to actively learn about science and technology.
Ditmore’s passion for helping children succeed in life led him to get involved with the San Jose-based Healthier Kids Foundation nonprofit organization that started 12 years ago. The group raises money to provide health insurance for under-served young people in Santa Clara County, primarily the children of undocumented immigrants.

For 10 years, the focus was on fund raising and getting hospitals, First Five and other organizations to donate money for insurance, which is administered through the Santa Clara Family Health Foundation. Four years ago, Ditmore was active in passing the county’s Measure A ballot measure, creating a $29 annual parcel tax which generates money used for buying insurance for low-income children.

Time management skills are important for leaders to succeed in juggling many professional and personal activities, he said.

“My life is balanced roughly in thirds,” he said. “It’s a third family, a third nonprofit community area, and a third still being involved in business.”

Another important skill that a leader involved on a board or any management position needs to acquire is how to successfully get people to interact with each other, Ditmore said.

“In a business or personal situation, when people are having trouble and disagreeing, there are insecurities involved because they’re afraid to admit they’re wrong,” he said. “You’ve got to get beyond that and say it’s OK to admit you’re wrong, and we’ve got to find some common ground where we can find a solution.”

Learning to deal with people as human beings with complex emotions is one of the critical skills for all leaders, he said.

Elaine smiled at Ditmore when she acknowledged that she accepted years ago her husband would always seek opportunities to stay active in his “retirement” years.

“The reality is, I have failed retirement a number of times, ultimately to the point that I realized that I’m not going to retire,” Ditmore said. “I’m going to keep my life this way and I’m happy.”