Guest column by Lisa Washington: Let there be light at Downtown Amphitheater 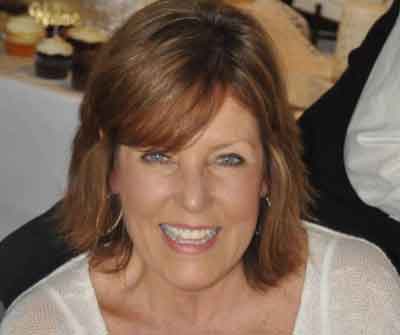 The Leadership Morgan Hill Class of 2015 has a “Bright Idea” for our 20th anniversary project — and we’re engaging the community to make it happen. We’ve moved into high gear with ambitious plans to raise $25,000 for a permanent, state-of-the-art stage lighting system for the Downtown Amphitheater at the Morgan Hill Community and Cultural Center.

We expect to enhance the experience of residents and out-of-town guests at this year’s Friday Night Music Series, and broaden the appeal of the amphitheater for additional events. For the city of Morgan Hill, this will translate into upside potential for revenues.

With the Bright Idea project, our class intends to design, build and install a state-of-the-art stage lighting system for the Downtown Amphitheater stage.

Existing light poles will be used with six lights per pole. An additional 12 lights will be located on stage for down lighting, backlighting and angling to illuminate the dance floor. The LED light fixtures will be weather and UV resistant with wireless controls and a spectrum of colors (red, green, blue and white).

Among the criteria for each Leadership class project is that it deliver tangible value to the community. That’s why our Bright Idea has been embraced enthusiastically by the Morgan Hill Chamber of Commerce, city of Morgan Hill and LMH Board.

“This project is fantastic for our town,” said Rich Firato, board chair of the Chamber of Commerce, which hosts the Friday Night Music Series. “It will bring an upscale experience to concert goers and performers.”

Jennie Tucker, community services supervisor for the city, said it’s been a pleasure to see the enthusiasm and collaboration between the class and the city throughout planning 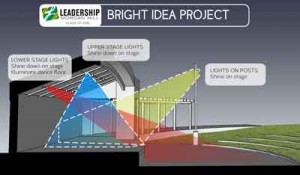 Graphic courtesy Leadership Morgan Hill
This graphic depicts how the new stage lights will work at the Downtown Amphitheater.

“A solid game plan is in place, and it’s on the agenda for review and approval by the City Council April 15.”

Rene Spring, president of Leadership Morgan Hill, said he’s been impressed with how quickly this year’s class has come together to map out plans and mobilize forces.

“If their progress in a few short weeks is any indicator, this talented and diverse group is well on its way to fulfilling Leadership’s vision to ignite the passions and inspire future leaders within our community,” he said.

Contributions at any level to the Bright Idea project by individuals, families, local businesses and civic groups will be pivotal to fulfilling our team’s goal to reach our $25,000 target by early May for installation in time for the Friday Night Music Series kick-off June 5.
Bubbles Wine Bar came on board as a Gold sponsor, following successful kick-off fundraisers held to raise awareness and gather support for the project. A combination of ticket sales, 50/50 raffles and donations on March 23 and 24 brought in a net total of $4,101.

“Leadership Morgan Hill is a phenomenal program, so we’re delighted to support the class of 2015’s Bright Idea project and proud to be a Gold sponsor,” said David Dindak, a local resident and proprietor of Bubbles Wine Bar. “It was not only a successful event, but a really fun time for an enthusiastic and energetic group of class members and guests.”

Where: Jimmy P’s Pizza Factory (formerly Dutchman’s Pizza)
When: April 18, noon to 10 p.m.
What: Mention LMH Class of 2015 and 15 percent of proceeds will go to the Bright Idea fundraiser
Where: MOOYAH Burgers, Fries & Shakes
When: April 28, 11 a.m. to 9 p.m.
What: Mention Leadership Morgan Hill Class of 2015 and a percentage of the proceeds go to the fundraiser.
What: Silicon Valley Gives 2015 24-hour online day of giving
May 5, midnight to 11:59 p.m., or donate $10 or more at: www.svgives.razoo.com/story/Leadership-Morgan-Hill-Class-Of-2015-Bright-Idea-Project