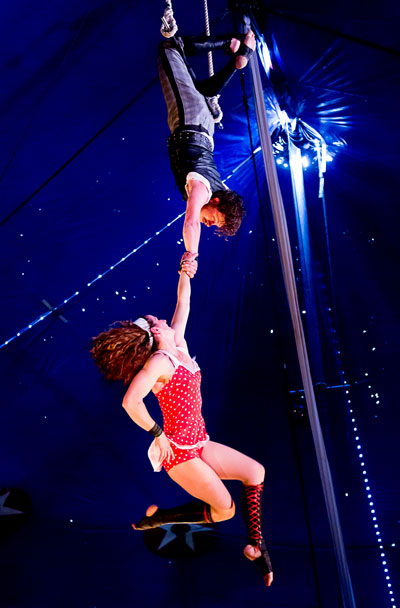 Those lyrics written by Irving Berlin in the early 1920s refer to the traditional Big Top circus of clowns, tightrope walkers and jugglers. But they could also easily describe the Flynn Creek Circus, a theater company pushing traditional circus arts to an innovative edge.

The Mendocino-based circus will be coming to Morgan Hill this month, with owners Blaze Birge and David Jones bringing acrobats, aerialists, equilibrists and other performers to light up the stage in a charming “Old World”-style tent set up at Morgan Hill’s Outdoor Sports Center. The six circus shows in Morgan Hill are being sponsored by the Morgan Hill Youth Sports Alliance, which operates the OSC.

“We’re really excited to bring our show and artists from all over the world and take them to smaller rural areas where people normally wouldn’t see that type of work,” Birge said. “We’re sharing artists with the residents and they are sharing their (community) with us.”

One Flynn Creek performer who will be welcomed by family and friends is former Morgan Hill resident and Live Oak High School grad Kara Starkweather. Along with her performance partner Ajah Leas, Starkweather, 36, will wow the crowds with aerial acts.

“I’m excited I get to come to my hometown with this tour,” Starkweather said. “But, it’s been so much work getting ready that I haven’t really thought about it much.”

Starkweather, who graduated from Live Oak in 1996, didn’t set out to perform in a circus. Like a lot of people who end up doing what they love, it happened almost by accident.

“Growing up I went through Lana’s Dance Studio and danced in high school,” she said. “I didn’t necessarily go to school for dance, but that’s what I came out with.” She graduated from the University of California, Davis, with a double major in dance and Spanish.

A little more than a decade ago, she and her husband moved to Mendocino. The couple now have two girls, 12 and 8. In 2005, she met Birge after seeing a show.

“When I saw them perform here in Mendocino in 2005, I thought: ‘Wow, that looks really fun. I want to try that,’” she said. Shortly after that experience, she started working with the circus as a ground performer because of her dance background.

“I just got interested in aerial work so I took a few classes with Blaze and started working on my own,” she said. 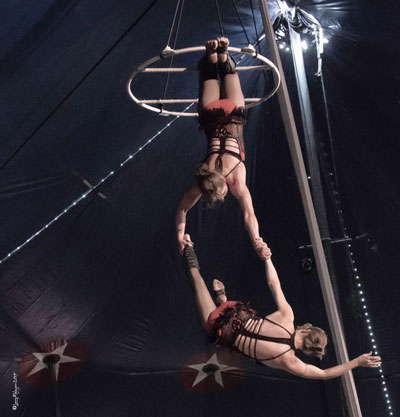 Later, she found Leas — who eventually became her aerial partner — doing the same thing. So Starkweather crafted her own apparatus to perform from — a hoop with two solid bars inside.

In 2001, Starkweather and Leas joined forces. They will perform for about five and a half minutes with the hoop that rises and falls as they twist and turn, dozens of feet off the ground.

“We’ve been working on our performance for four years and have performed it for the past three years,” she said. “It took a year of practice before we performed in front of an audience.”

Birge, 40, said Starkweather is a graceful performers. “She has been progressing and has become a strong aerialist in her own right and we’re excited to have her on the tour,” she said.

This will be the first tour in which Flynn Creek Circus will erect a huge tent that seats about 400 people. They previously played smaller venues such as theaters, she said.

Kara Starkweather — holding her aerial partner Ajah Leas — perform at a recent show. The two have been aerial partners for four years and will perform together when the Flynn Creek Circus comes to Morgan Hill July 16 to 19 at the Outdoor Sports Center on Condit Road.
Photo courtesy Kara Starkweather

Birge began her career at the age of 25. After receiving degrees in philosophy and visual arts and a short stint as a ceramic sculptor, she decided to travel around Europe with a fifth-generation Romanian circus family. As an apprentice, she learned circus arts such as rigging, stake pounding, tent building and wound-nursing. Subsequent tours as a trapezist only deepened her appreciation for the “traditional” circus. She formed Flynn Creek Circus, hoping to merge what she admired about tradition with what she envisioned as innovation.

In 2002 by Birge and Nick Schwatrz founded Flynn Creek Circus, gathering talent from a variety of artistic genres. After several years, Schwatrz left and about the same time, Birge and Jones — who met when he was a student of hers — accepted their first outside contract with their double trapeze act.

Since that time, Birge has become an experienced choreographer, teacher, director, designer, producer, and aerialist. She now focuses on her performing work as part of the Daring Jones Duo with her husband David Jones, who separately trained with the same Romanian circus family.

After their initial training, they returned to Northern California. Rigging trapezes in majestic redwood trees on the remote Flynn Creek Pottery Ranch, they refined their talents.

They first combined their skills to form a dynamic double trapeze act in 2004. The isolation of their environment contributes to the originality of their choreography and lends a quality best described as “heart in throat,” Birge said. Combining speed, grace and power, they strive to entertain their audiences with disciplined artistic and athletic risk.

The Daring Jones Duo has been featured in both traditional and non-traditional circus all over the world. The couple prefer exotic location and adventure to name profile.

The Flynn Creek Circus crew and performers are all anticipating coming to Morgan Hill and entertaining families and other residents with the artistry of the circus world. When it pulls into town Monday July 13, the crew will start setting up the big tent on the fields of the Outdoor Sports Center located on Condit Road east of U.S. 101. The first show is 7:30 p.m. Thursday July 16. Other shows are 7 p.m Friday July 17, 3 and 7 p.m. Saturday July 18 and 1:30 and 4 p.m. Sunday July 19. Doors open one hour before each show and seating is general admission. The shows do not feature animal acts.

“We’re really excited to come to Morgan Hill,” Birge said. “There is some really pretty amazing stuff in the show.”