Developers see potential for downtown merchants, but warn it will take time 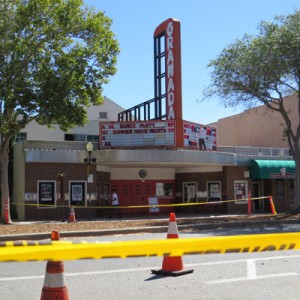 Photo by Marty Cheek
Developer Frank Leal has plans to convert the downtown’s Granada Theater into an event venue, as well as construct a new building adjacent to it that would house a market hall, banquet/catering space, and a boutique hotel with 45 to 50 rooms.

Jackhammers pound the morning air as workers cut through the pavement on Monterey Road. A large forklift carries a load of material to workers constructing the parking garage on Fourth Street. Dust flies everywhere as traffic carefully crawls through the chaos that is now downtown Morgan Hill.

Residents, visitors and businesses owners in the past six weeks have begun to see the downtown district undergoing massive activity as work is done to revitalize it and use $25 million in former Redevelopment Agency funds by the end of the year. And deals are being made with developers for four prominent sites bought years ago with RDA funds and put up for sale as required by the state after Gov. Jerry Brown officially dissolved RDAs on Feb. 1, 2012.

“I don’t know if this downtown has ever seen this much change in such a short period of time,” said Edith Ramirez, principal planner for economic development with the city of Morgan Hill. “It’s a significant amount of change and activity. For us most importantly, the hard work that this community has done over the years is finally coming to fruition. This community has ambition. This vision has really started to come into reality with all the improvements that are now starting to come into place.”

Among the major areas of construction now well underway is the Downtown Parking Structure located mid-block on Third Street. Built on the former “Sunsweet” cannery property at a projected cost of $10 million from RDA funds, the three-story garage will provide 275 spaces for vehicles with up to 4,000 square feet of new retail and commercial space fronting Third Street.

Other developments in the works are:

• 17390 Monterey Road (where Royal Clothiers and Tryst clothing stores are located) to Lone Star Development for use as a small retail center.

• The Depot Center at 80 E. Second St. (where BookSmart is located) to City Ventures to build 28 townhomes and retail stores on Third Street.

• 17440 Monterey (where the Downtown Mall and the Granada Theater are located) to wine maker Frank Leal, working with Weston-Miles Architects, to upgrade the theater into an event and dining venue, as well as construct a new building adjacent to it that would house a market hall, banquet/catering space, and a boutique hotel with 45 to 50 rooms. 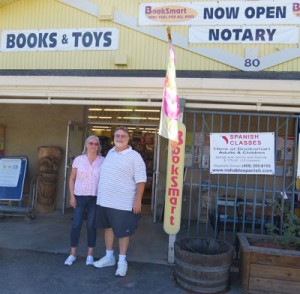 Photo by Marty Cheek
Cinda Meister and Brad Jones stand in front of their BookSmart store on the property which is on the list for development in downtown.

Developers see the economic opportunity in downtown Morgan Hill as the city grows into a destination for tourism in the coming years, especially as the community develops a wide-spread Bay Area reputation for fine food and wine.

“We are really excited about the momentum that’s in downtown Morgan Hill,” said Don Imwalle, president of Imwalle Properties. “You can see it in the existing restaurants and there seems to be a capacity for more. There’s housing growth and I think in general there’s a desire across all communities to return to a traditional downtown format. Some of the new ground-up construction is seeking to recreate this downtown environment. They provide a perfect sense of community, which is something you can’t buy on the environment. We like downtowns and we like downtown Morgan Hill.”

Imwalle has a sense that the community of Morgan Hill revolves around food and service, which is what the developer is seeking to design from the beginning into its downtown property. Soft-goods retail stores are challenging to bring into the downtown unless they’re part of a more traditional shopping mall or grocery-anchored space, he said.

The city’s downtown parking structure is a “big deal” for the success of the downtown’s future growth, as evidenced by the 100 block of Castro Street in downtown Mountain View which has brought in visitors who want the convenience of easy parking.

“Other downtowns that have been successful solved the parking problem first and enjoyed success second,” Imwalle said. “The parking garage will play a bigger role than our development in doing that. It’s multi-story and visible.” 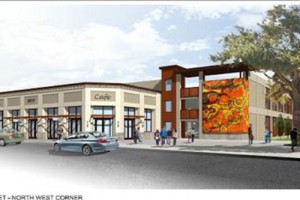 Drawings courtesy city of Morgan Hill
The view of the new parking garage from the Fourth Street entrance .

Steve Pace, owner of Lone Star Development, sees a long-term vision in the redevelopment of downtown Morgan Hill as the businesses along Monterey Road move over the years toward a high-density capacity of restaurants, retail and entertainment environment.

For the short term, Pace’s plan is not to drastically redevelop the property or knock the building down. He’ll upgrade the property’s infrastructure and re-do the small park on the side to make it more attractive and a more usable space for pedestrians and families.

“For now, I’m planning on leaving those two tenants there,” he said of Royal Clothiers and Tryst. “I want to make it look like something you’ll see an upscale downtown area – Carmel, Los Gatos, or Los Altos. I think it’s a great little building, I think it has a lot of potential. It’s going to fit in well to what the downtown is heading toward right now with the redevelopment.”

What it is going to take for downtown Morgan Hill to become more vibrant for visitors is to look at other downtowns and study what they’ve done in terms of making a more viable environment for people, he said. Restaurants are already playing a role in this, but Pace would also like to see more boutique-oriented shops that will increase pedestrian traffic.

“I think that downtown is going in the right direction but it has a long ways to go,” he said. “This kind of development in a downtown area is not something that will happen as fast as in a major shopping center next to a freeway where you’ll transform an agriculture field into, boom, 10- to 15-, to 20-acre space overnight. Morgan Hill is really headed in the right direction, but it’s going to take a while.”

The city’s vision for a more walkable, livable downtown is something that has already been spelled out in the Specific Plan, which is the community’s vision, Ramirez said. The Specific Plan talks about creating a vibrant district that is welcoming to pedestrians.

“Our vision in essence is creating a destination, is having a downtown that keeps and maintains its historic nature and charm that it currently has,” she said. “The downtown’s small town feel can also be stretched in order to be attractive and interesting for the new residents of Morgan Hill and the younger employees with creative minds who are looking for an attractive entertainment district. Our vision is one of the downtown where people feel safe and comfortable and they can walk the streets and can meander and dine and enjoy their meal outdoors in the comfort of this amazing weather as well as a quieter downtown in regards to noise.”

The process of development has been accelerating and will continue building steam as developers bite into their various sites projects and start construction, she said.

“I think it’s a perfect storm,” Ramirez said. “One, we have a very tight schedule with the funding for the RDA that requires that our investment is spent this year, so that is a tremendous catalyst for us. The dissolution of the redevelopment with the properties going to the oversight board is also forcing us to make decisions on these properties.”

An equal and perhaps a more important aspect that is in play is that the economy is much better than it was several years ago, she said, so people are lending, people are developing, people are investing, and that means more growth in Morgan Hill, she said.

“Morgan Hill is starting to be considered an up-and-coming place,” she said. “A lot of the community is trying to promote this area as a destination and a good place to invest in, which is paying off…. It’s very exciting and we’re trying to do our very best to move as quickly as we can to capture this market.”

Morgan Hill resident John McKay, who is a founder of the Tourism Alliance and a member of the Planning Commission, sees the downtown development as key to bringing in more visitors to Morgan Hill to supplement residents patronizing downtown retail and restaurant merchants.

“My overall take on this is that this development is what Morgan Hill needs,” he said. “This is that next step. Right now the downtown is struggling. It’s not getting traction. We don’ t have the right mix of shops right now for your average consumer. We have a lot of specialty shops that appeal to very focused segments of the community. But I think that one reason they’re struggling is because there’s just not enough support in the community for them.”

With all the construction going on downtown, merchants are seeing their customer activity dropping, making it difficult to keep the businesses open, McKay said. But perhaps in two or three years with a revitalized downtown and interesting shops and restaurants, Morgan Hill will gain a reputation much like that of St. Helena in Napa Valley where there are few residents but the charming downtown attracts wine-destination tourism dollars.

“Downtown is being dragged through construction and it looks like a war zone,” he said. “With everything that’s going on right now, what people need to remember is that they have to go downtown and support the businesses. They need to patronize the businesses right now. Great things are coming but we also need to help the businesses get through this to the end and have patrons come down even if it’s inconvenient.”

Downtown Developments in the Works

• 17390 Monterey Road (where Royal Clothiers and Tryst stores are located) to Lone Star Development for use as a small retail center.
• The Depot Center at 80 E. Second St. (where BookSmart is located) to City Ventures to build 28 townhomes and retail stores on Third Street.
• The southeast corner of Monterey Road and Third Street (where the Pop-up Park is located) to Imwalle Properties/EPD for two restaurants, one a 5,000-square-foot structure and the other a 6,000-square-foot structure
• 17440 Monterey (where the Downtown Mall and the Granada Theater are located) to wine maker Frank Leal, working with Weston-Miles Architects, to upgrade the theater into an event and dining venue, as well as construct a new building adjacent to it that would house a market hall, banquet/catering space and a boutique hotel with 45 to 50 rooms.