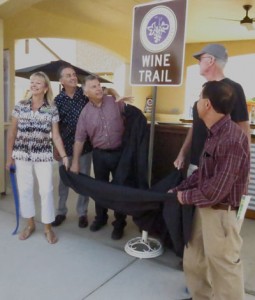 It’s been a little more than a year since the Santa Clara Valley Wine Trail was inaugurated. At Lion Ranch Vineyards and Winery Aug. 29, a celebration of the one-year anniversary took place, with local wine-makers proclaiming the trail is a proven success, bringing in an increasing number of customers who want to get away from Napa Valley and other over-commercialized regions and instead discover a re-emerging California wine country.

In the Gilroy, San Martin and Morgan Hill region, there are about 25 wineries — some of them long-established such as Guglielmo Winery and Morgan Hill Cellars and other relatively new such as Paradise Valley and Castillo’s Hillside Shire Winery. With many of them still family-run (Guglielmo for 90 years!), they offer a far different experience from other regions’ wineries glutted by tourists attracted by heavy marketing.

California wine historian Charles L. Sullivan proclaims Santa Clara Valley as “the original premium wine growing region in the modern era of wine-making in America.” Indeed, the region has a long history for wine-making, with the first planting of grapes for sacramental purposes done at the Santa Clara Mission in 1798.

By the early 1850s, with Gold Rush pioneers pouring into the state, the rich soil and Mediterranean climate in Santa Clara County meant there were more acres of commercial vineyards here than any other California county. (In comparison, Napa Valley’s first commercial vineyard was planted in 1858 and the first commercial winery in that valley was established by Charles Kruges in St. Helena in 1861.)

By 1883, Santa Clara Valley had nearly 15,000 acres of vineyards and more than 100 wineries. Then the phylloxera, a microscopic sap-sucking bug, hit the grape roots, damaging yield. Over time, as the aphid-like insect hit winemakers hard, many farmers decided to replace their vineyards with orchards such as prune and apricots to be canned and shipped to the burgeoning crowds back east. Prohibition from 1920 to 1933 took its toll, too.

But in the 1970s, California wines started having a resurgence, with a growing popularity in France and other European countries thanks in part to the famous Judgment of Paris competition of 1976 where California wines competed successfully against established French wines. That was also the same decade when Silicon Valley really started to take off with high-tech companies such as Apple bringing personal computing power to the people. As Silicon Valley executives made their millions, some of them decided to invest in wine-making enterprises, getting back to the soil and away from silicon and software.

Now there are around 1,500 acres of vines planted in the Santa Clara Valley AVA. Many of the wineries in the region have won prestigious awards for their fine wines. And the region is steadily moving away from the “jug alley” reputation it had about a decade ago and is growing in esteem with wine connoisseurs. The winemakers, through the Wineries of Santa Clara Valley initiatives, are working hard to improve the quality of the region’s wines — and their efforts are paying off with the growth of more visitors and prestigious awards.

Now the hottest trend for American and European vacationers is “enotourism.” That fancy word simply means that travelers visit a wine region for the purpose of tasting and purchasing wine at or near the source. They spend their time and dollars touring the wineries, taking vineyard walks and even taking an active role among the vines in the harvest.

In 2013 in the United States, enotourism and culinary-oriented vacations engaged more than 27 million travelers, about 17 percent of leisure travel in America. Many people who love fine wine spend big bucks on vino-centered leisure. The South Valley region can well take advantage of enotourism by marketing itself as the “un-Napa” valley where our wineries provide a fun and friendly wine-tasting visit for travelers.
We raise a glass in a toast of celebration to the creators of the Santa Clara County Wine Trail for their vision to celebrate the viticulture heritage of our region. They are introducing visitors to the many exceptional winemakers who make their home here.