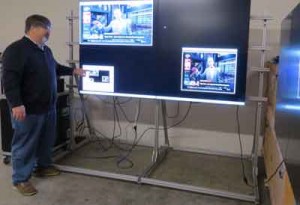 Super Bowl 50 will be an international, high-profile event for the Bay Area. Ron Vanderhorst, owner and general manager at Live Wall Media, has been doing his part since October to make sure terrorist acts won’t mar the celebration of the NFL’s national championship game between the Panthers and Broncos this weekend.

The Morgan Hill-based company has a contract with the San Jose Police Department for one of its video walls that will be used by various law enforcement agencies to keep people safe during the big game.

That technology consists of up to 40 displays that can “show traffic cameras, social media, or their own applications they use on day-to-day basis and we can display all that on various formats on a video wall and they then can make decisions based on what they are seeing,” he said.

In addition to law enforcement, other industries that have used Live Wall Media include traffic management agencies, emergency operation centers, control rooms for corporate security and power companies. In fact, the company has sold about two dozen to small power companies throughout the United States. They’ve also sold their walls — the costs ranges from about $100,000 to $500,000 — to the U.S. State Department, NASA and Oracle.

Born in Oakland and raised in Newark, Vanderhorst got into the high-tech field in the late 1970s when he was working for a computer company and was transferred to Seattle, Wash. He worked in the field until about the turn of the century when the industry hit a lull. From 2002 to 2008 he represented two boat lines and sold boats then delivered them to Scandinavia. From there — with his Coast Guard license — he’d take the buyers out on their first cruise.

But in 2009 while spending time with his mother, he came across the idea for the Live Wall Media company and went to work.

The company is doing well with clients around California and other states.

“We’re lucky to have guys with a lot of experience,” he said. “This is gonna be the last fling for all of us.”

But before they go, there are still plenty of walls to install. The three are passionate about their work and that love for what they do comes through to their customers.

“They know they are working with someone who is really vested in the business and enjoys doing this,” he said. “They’re not dealing with some regional salesman.”

Just the other day, he said, they got a call from a commercial satellite provider that currently has a 100-foot wall in an operations center in Atlanta.

“People find us on the Internet,” Vanderhorst said. “They said they’d called around and got a referral and someone recommended us. It just shows that if you take care of your customers and do good business the word will get around.”