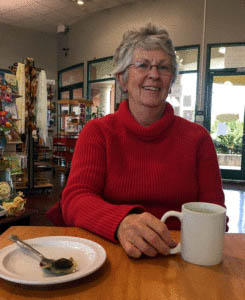 Chris Hopwood relaxes with a cup of tea at BookSmart. Born and raised in England, she now lives in Morgan Hill and sits on the board of directors for the South Valley Symphony. Photo by Melissa Hartman

Chris Hopwood found herself on the South Valley Symphony’s board for a simple and nostalgic reason: the classical scores the musicians perform under conductor Anthony Quartuccio’s direction remind her of her childhood in England.

Whether she is taking care of the bookkeeping or the box office, Hopwood makes sure things run smoothly.

The seeds of her love for classical music were planted at an early age, Hopwood said. She listened to phonograph records of the great composers’ works and developed her an appreciation that inspired her to learn how to play piano.

Hopwood did not at first wish to be on the symphony’s board. As the website director, however, she found she didn’t know what was happening. Since then, she has helped put together events such as the fundraiser taking place June 4 featuring the popular Pacific Brass Band at its second annual summer concert at Guglielmo Winery.

The band was able to be booked because several of the members of the band play in the symphony orchestra as well. Tickets cost $15 and it’s a great way to kick off the summer, Hopwood said. The symphony is putting on the event again this year since people enjoyed the opportunity to bring their own food and buy a bottle of wine and relax out among the vines, she said.

Originally, Hopwood’s plan was not to move to the United States at all. However, she had an opportunity to work as a Spanish translator for a year in the states. “I found life so completely different from what I was used to, I knew I had to stay another year just to see,” she said. Since then, she has traveled back and forth between the United States and England a few times.

Hopwood met her husband in Irvine in the 1980s. Not long after they moved to Florida. They then decided to make their home in Morgan Hill in 1991. The Hopwoods had a desire to live somewhere that “spoke of being in California,” a place that wasn’t just another American housing development.

In Morgan Hill, Hopwood has found her love for an involved lifestyle and nature to be sustained. She reads, interacts with the symphony, recently joined the local branch of the American Association of University Women and works with the activist group Indivisible South Valley. She still claims to do “nothing very onerous.” These activities do not include her “therapy,” or gardening her half-acre of land in the Holiday Lake Estates home overlooking Anderson Reservoir.

There are some things Hopwood misses from her native England, including being able to visit many of her family members in person and not over social media on the Internet. Something she does not miss is the lack of equality and acceptable workplace conditions for women in England. Hopwood supported the Women’s March that took place earlier this year and the rest of the political rallies that have taken place. On these events, she said firmly: “Well, it’s time.”

There are a few factors that give Hopwood hope about effective change that can and will happen in the future, but the most important one is the diversity of the United States. Hopwood compared the U.S.’s variety to the white homogeneity of Britain.

“People here have lived through situations and those situations give us strength in our voices,” she said. “(These people) are going to be the ones who fight, because they came here for the promise of this country. Some people go to bed at night and hope there’s not going to be a knock at the door and have one family member dragged off, never to be seen again.”

For Hopwood and her husband, Morgan Hill has been a good place to make a home, she said. “It allows you to be as busy as you’d like to be,” she said. However, the pace of the entire Silicon Valley region has become “a bit much” and Hopwood can see herself moving in the future.

“I am of the opinion that you can never go back because things change, and one of the things that changes is places get more crowded and then they get impersonal,” she said. “I don’t think I will live the rest of my life here. I don’t know where I’ll go, it’s kind of frightening.”

Wherever she might find herself in the future, one thing is certain. She will continue to love classical music and make it an important part of her life.