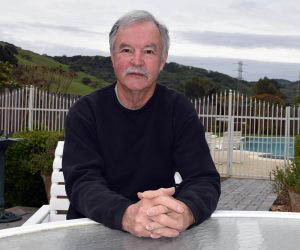 Photo by Robert Airoldi
Roger Beaulieu in the backyard of his northwest Morgan Hill home.

After graduating from high school in Brunswick, Maine, Roger Beaulieu worked for a couple of years in the shipyards of his home state. But the work was grueling.

“I said to myself, ‘maybe college is better than this,’” he said with a wry grin.

He worked with a counselor to get into the University of South Maine and that counselor suggested perhaps becoming a teacher would be a good idea as there were a lot of jobs available at that time in the early 1960s.
“I thought, that sounds good to me,” he said. He eventually earned a Bachelor of Arts in Life Science which allowed him to teach any science course to middle and high school students.

Now the next question was where to look for work, he said. After graduation he and a friend looked at attending graduate school in California.

“We were fed up with the long cold winters,” he said. “And, the starting salaries were better in California.” The two researched Humboldt State and eventually enrolled to get their California teaching credentials.

Now, another decision loomed as he began searching for a job. He saw a notice that Mariposa High School near Yosemite National Park had jobs available.

He had never been to the Sierras and thought that would be a great place to live and work. So, at the age of 28, he began his teaching career.

During that time he met his wife Marilyn, who — born and raised in San Martin — would visit her sister who like Roger was also a first-year teacher. Eventually the two met and hit it off.

The couple married in 1972 and Roger, now 75, took a job as a substitute teacher at Burnett School, right across the street from the home the couple purchased two years later, the same year he was hired full time. He stayed there for about eight years before moving on to Britton Middle School, where he stayed until he retired in 2002. The final 12 years of his career were spent teaching chemistry to ninth-graders.

“It was the best 12 years of my career,” he said. “When I started teaching chemistry I found it fun. You can relate the subject to everyday life.”

Even teaching precocious ninth-graders was enjoyable, he said.

“You’re getting to know the beast, and once you figure them out, it’s a joy,” he said.

Early in his retirement he worked part time at San Jose State University as a student teacher supervisor, which he enjoyed. “I got to pass on the knowledge I learned in 30 years,” he said.

About the time he retired, he learned he suffers from neuropathy, a nerve disorder that affects his balance. Riding the bike at the gym seems to help somewhat, he said. He can be seen there most weekday mornings, unless he’s working for a company that handles the registration tables and room monitoring at the San Jose and Santa Clara Convention Centers for trade shows, where he gets to meet and talk to people from all over the world.

Staying dedicated to his profession, he volunteers with the Teachers Aid Coalition, a nonprofit that raises money to purchase supplies and materials for teachers so they don’t have to spend out of their own pockets. They raise funds at the annual Chocolate and Wine for Valentine event in February. The two giveaways for teachers take place in March and October.

“What I like the most is seeing the expression on the young teachers’ faces,” he said. “They fill their bags with needed supplies and on the way out say, ‘thank you, thank you.’ That’s the best part.”

About living in Morgan Hill for four-plus decades, he said he likes the open spaces, “which are closing up rapidly, and the greenbelt between Morgan Hill and San Jose.” He also likes the close-knit community feeling. “I grew up in a small town and I like that feeling,” he said. He sees people he knows around town, especially former students.
“I see three or four regularly at the gym,” he said.

With 15 years of retirement under his belt, he enjoys watching the Giants, Warriors, Sharks and 49ers, riding his 1949 tractor clearing weeds on the one-acre plot behind his Morgan Hill home, and visiting with his two daughters, son and two grandchildren who live nearby.