Frank Riley leads Presbyterian Church, and is a commander in the United States Naval Reserve

In front of his congregation in the Morgan Hill Presbyterian Church chapel July 2, Pastor Frank Riley took an oath of office promoting him to a position as commander in the United States Navy Reserve. The exchange was an special one for Riley because he was sworn in by his friend and fellow church member Capt. Glenn Lattig.

The two are brothers in the Christian faith. Now they share a special connection from military protocol. Lattig was the commanding officer at the United States Submarine School before retiring from his military career. The 55-year-old Riley said it was imperative to him to be sworn in in front of his congregation because of his active military status and the possibility that at any time he could be selected to be a chaplain elsewhere.

“If I’m deployed, they are the ones that will bear the burden,” he said. “They share in the celebration now, and they will share in the experience of combat if I am called upon later.”

Riley’s wife, Jenny, and his son, Jack, were present to help pin his new badges on his uniform accordingly.

The path to becoming senior pastor in Morgan Hill and a naval commander was a winding one for Riley that brought him full circle in his faith. He and Jenny were both raised as Presbyterians. Later, he became a pastor who worked with the Evangelical Covenant.

“I’m near the end of my career, and I’m back,” he said with a chuckle. 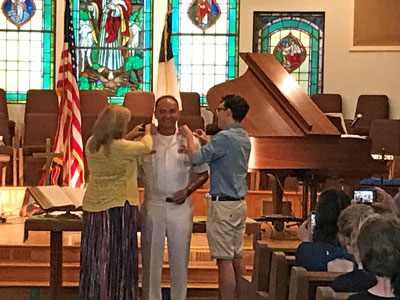 Born in Los Angeles, Riley grew up in Roland Heights. Morgan Hill reminds him of his Southern California hometown. As a youth, he submerged himself in his religion. When he was about 10 years old, pastors at his church were calling him “their future pastor.”

At that time, he wanted to become a doctor. But 16-year-old Riley had a revelation in the high school lunch line that secured his path to collegiate vocational education. He came into contact with a teenage boy who didn’t fit in. The unpopular student didn’t have many friends. Even though Riley had much going for him socially because he was athletic and intelligent, he was no more valuable than his fellow classmate he realized. This epiphany turned his desire from wanting to care for people’s physical health as a physician to wanting to care for their hearts and souls through a Christian faith-based ministry.

Riley earned his bachelor of literature and biblical studies degree from Azusa Pacific University. He later received his master of divinity degree and his doctorate from Fuller Theological Seminary.

Riley met Jenny while they were both students at Azusa. They became friends, and later they ended up in the same masters classes at Fuller. The romance continues into the present, with the couple celebrating 30 years of marrigage in October. They have two children. Cora is 23 and Jack is 21.

Riley was most recently a pastor at Trinity Covenant Church in Manchester, Conn. Before that, he served as a minister in Orange County, Minn., Simi Valley and Santa Rosa. “I’ve been around the block,” he said.

At Trinity, Riley decided he wanted to become a military chaplain. A few events caused him to pursue the job in 2006, including previously being recruited by the naval academy in high school. Two members of his congregation graduated from the Marine Corps boot camp and invited him to attend the ceremony. Friends in ministry also encouraged him to pursue the job because they thought he would be excellent at helping men and women in the Armed Forces and their families deal with the psychological and spiritual challenges of a life in the military. He learned there was also a shortage of chaplains.

“A chaplain cares for about 1,000 soldiers by average, and the Army was down 200 chaplains, the Navy down 40 chaplains,” he said. “It broke my heart to think that the nation’s at war and that people can’t get to a pastor when they need one.”

The day after Riley attended the Marine Corps graduation, he went to his son’s school where they sang the Lee Greenwood country song “God Bless the U.S.A.” One of the lines hit him emotionally. “‘And I stand up next to you and defend her still today,’” he said. “I had never stood up for the country, but I could stand next to those who do,” he said.

The next thing he knew he was at a recruiter’s office. In terms of readiness, none of the services “make” clergy. They instead come into the military as representatives of their various faith groups. Riley was older than many people in the military, so it was important to him to know that when he arrived to serve he could keep up mentally and physically. Because of this, he trained to get his body in shape before heading to the Camp Pendleton for training.

As a military chaplain, Riley gets to meet people he would not normal encounter. In the American Armed Forces, service people trust chaplains and hold them in high regarded. Men and women in uniform will come to him when they need to talk, and they can be timid about the interaction discussing their sensitive personal issues. It’s the job of a military chaplain to be there for their emotional and spiritual needs, he said. They need to look past the pain and profanity that often arise from wartime settings and to care enough to talk without judgment regardless of religious affiliation or beliefs.

“We are the officers that love ya,” he said.

Navy chaplains serve the Marine Corps and the Navy, so they discuss being “green side” or “blue side.” For most of Riley’s career he has been green side. This changed when he mobilized to Afghanistan and served as a Naval Forces Central Command Chaplain. He was responsible for naval officer care throughout the country.

Riley currently serves with Naval Special Warfare out of Coronado Island, San Diego. He is the chaplain for the reserve SEAL teams for the East and West Coast. The job’s demands mean he could be deployed at any time. He sees being a chaplain at Morgan Hill Presbyterian as an extension of his ministry. He’s grateful for the flexibility the church gives him in doing his duty to the country. Most of the church members never notice he’s gone unless someone calls him and during the conversation hears explosions or choppers landing in the background, he said.

Morgan Hill Presbyterian Church has been a part of the community for 120 years and Riley hopes the membership reflects the demographics of the city. The church is multi-generational, multi-national and multi-ethnic. There are many whose home country is not the United States, which he finds unique.

The way the church structure is set brings new opportunity to Morgan Hill as well. “Every congregation has something to bring, and one of the values of our movement is egalitarian leadership,” Riley said. “That means whether you’re a man or a woman you can find your place in leadership among us.”