It’s Thursday morning. The day I dread, as I have to take two trips out during “country road rush hour.” My oldest son needs to get to a friend’s house two miles away on Foothill Avenue to get to school early for band practice. I have been up since 5 a.m. watching the line of cars zoom by my home on New Avenue in San Martin, 25 to 40 of them per minute. We live near Harvey Bear County Park and have been here for three years. I estimate that traffic has tripled in that time and somewhere between 4,000 and 5,000 cars, trucks and big rigs (yes, big rigs) pass my home between 5 and 8 every weekday morning. They don’t drive the speed limit as they are busily pushing their way into the Silicon Valley from Gilroy, Hollister and beyond, oblivious to the neighborhoods they race through.

It’s 6:05 a.m. and my son and I leave for the five-minute harrowing drive. I’m able to quickly get on New Avenue today. Sometimes I am forced to sit in my driveway for many minutes as I wait for an opening in the high-speed traffic. We wind down around the corner to the stop sign at Foothill and New avenues. I stop and make a right on Foothill. The car at the four-way stop who follows me immediately hits his brights and the yellow Ford Mustang passes me doing 70 miles per hour. I watch him as he does the same to the line of cars in front of me. “He must be up to 80 or 90 by now” I think as I turn on my blinkers and slow down to turn left into the driveway of my destination. Another car behind me hits his brights and honks, because for goodness sake I have no right to turn on this road. It’s their freeway now. 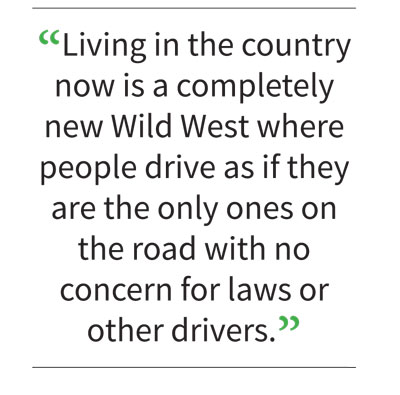 I drop my son off and turn around to return home. I drive down the single lane driveway and approach Foothill, relieved I’m turning right and not left across the speeding line of cars. As I look to the left and see it’s clear, I begin to nudge out onto the road and am faced with two cars coming at me. One on the right side of the road, one on the wrong side coming right at me. The car honks at me, swerves and just misses me as I sit stunned considering how close I was to being plowed into by the racing Honda. I make it home, luckily without incident.

It’s now 6:35 a.m. and time to take my other son to the bus stop. He goes to Monte Vista in Watsonville and takes the bus from Morgan Hill so he can get the seat he likes (instead of the pick-up in San Martin). The traffic in front of my house has started to lighten up to about 20 cars per minute at this point. We pull out and roll down New Avenue to Foothill Avenue. Same as 30 minutes ago. We drive down Foothill at 50 mph and the line of cars behind me are impatient because that is not nearly fast enough even though the speed limit is 45. I turn on my blinkers to turn left on Middle Avenue as I do every morning just as the guy behind me is preparing to pass me. He pulls back realizing I will soon be out of his sight. I brake to turn and get out of his way as he accelerates to well past 60 mph on the narrow two-lane road.

Driving down Middle Avenue we approach Columbet, then Sycamore. This is the intersection where my wife was in an accident last year as an unlicensed driver drove through the stop sign and pulled right in front of her. She T-boned him. My son holds on to his door handle as he knows what happens here every day. People blow through this stop as they race to avoid the traffic on adjacent U.S. 101. We get through the intersection after slowing from 40 to 20 for just one of those impatient people. Luckily, I’m paying attention.

We drive over U.S. 101 and look at the stalled line of vehicles going back into Gilroy and up into Morgan Hill. This is the traffic that causes all that I am describing. We make it up to Monterey Road to turn right and wait for the long line of cars to break so we can get in. The moment happens, and I get into the left lane so I am able to turn left at the Bible Church just a quarter mile down the road. I slow down and have a truck behind me who flips his brights on me. Nice guy.

I drop off my son, turn right onto Monterey Road to go home and make it without incident, which is typically the case as at that point I am against the current. Now time to prep for my grind into Silicon Valley.

I tell the details of this morning to illustrate the danger now present in these parts. Our family were residents of Morgan Hill for 11 years prior to moving to the country. We just wanted a bit more space and found this great home on what was at the time a marginally busy road. Well, “you take the good with the bad” we thought at that time. Now, thanks to unlimited growth south of us, and the advent of Google Maps and Waze, the roads that we drive everyday around our homes have turned into major commuter thoroughfares.

There is zero law enforcement. Stop signs and speed limits don’t matter. What do the people driving through here care? They don’t live here. Waze just says this is the best route to get them there faster, and that’s what matters.

It is only a matter of time before a large-scale accident where people die during these commute hours is going to happen. Living in the country now is a completely new Wild West where people drive as if they are the only ones on the road with no concern for laws or other drivers. I know many others in this area experience this. We need help. Where is the CHP? Where is the sheriff? Where are the people who help moderate traffic flow? Where are my tax dollars?

People will die. I pray it is not me and my kids as we drive to the bus from our lovely country home.

Kyle Krajewski grew up in San Jose and has lived in South Valley since 2003. He and his family lived in Morgan Hill until 2014 and now reside in San Martin. Krajewski  commutes to downtown San Jose where he runs client services for Liquid Agency, a marketing consultancy.