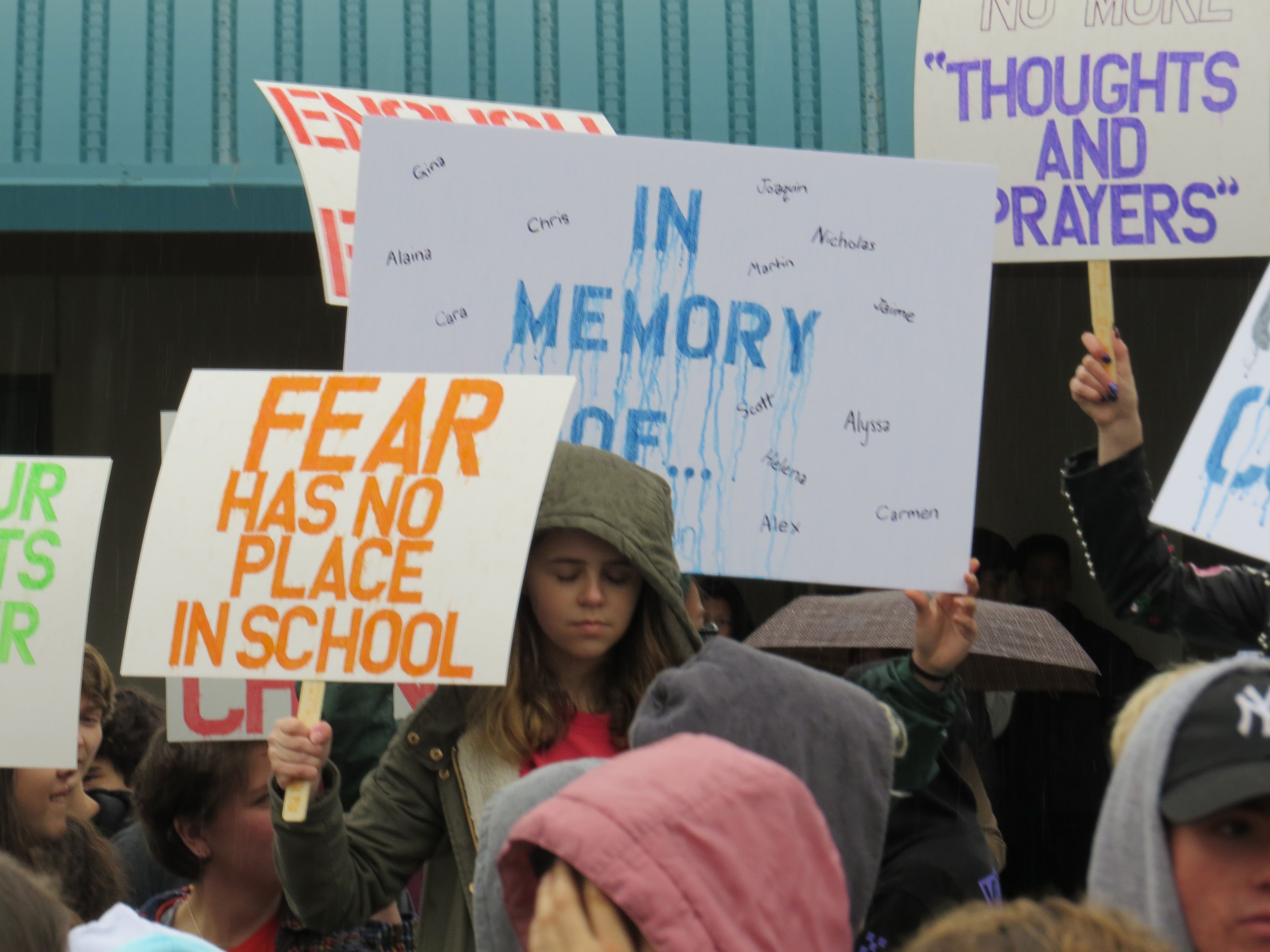 Photo by Marty Cheek
Students at Live Oak High School walked out of school for 17 minutes March 14 to remember those killed at Marjory Stoneman Douglas High School in Parkland, Fla.

Classroom doors at Sobrato High School opened precisely at 10 a.m. March 14 and about 300 students poured into the campus quad with a hope their action will help make schools across America safe from gun violence.

Rain trickled down from a grey sky, accenting tears as the students stood united in a ceremony to remember the 14 students and three teachers killed Valentine’s Day at Marjory Stoneman Douglas High School in Parkland, Fla.

Students at Live Oak, Central and Oakwood high schools also participated in their own 10 a.m. ceremonies, joining many other campuses across the nation where students walked out of their classrooms for 17 minutes and shared their voices on school safety.

“Participating really made me feel as though I was a part of something bigger that truly has the power to make people take notice of the serious issues with gun control that plague communities all across America,” said Sarah Graton, a senior at Sobrato. “What struck me most was how well the rain fit the event. I feel like if it had been sunny or even just a little cloudy with blue skies, the atmosphere wouldn’t have been so somber and respectful.” 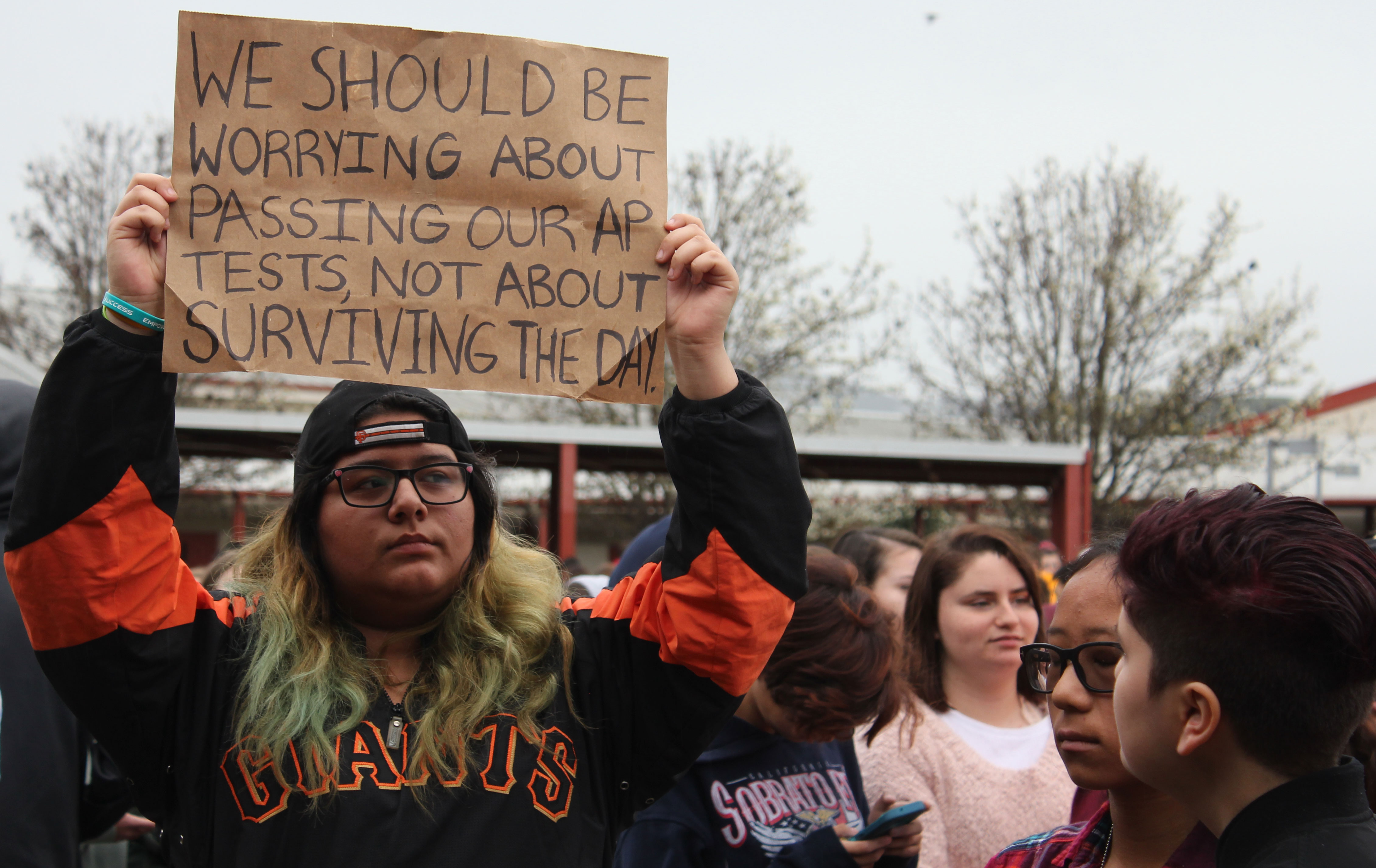 She observed the mournful faces of her peers as they listened to the names of the victims listed off while standing in silence in the rain. Graton participated in the walkout because many of the Parkland students who were killed by the shooter with an AR-15 were her age.

“For all I know, my life could be ended prematurely because of someone else, just like theirs were,” she said. “I wanted to pay my respect to these kids whose lives were cut short because of something that could have been easily prevented.”

Sobrato junior Austin Webb felt proud that as a nation and as teenagers, students are taking topics like the Parkland shooting seriously. The students gathered to respect those who have died in Parkland and to discuss what young people can do about school shootings. The fact that students around the country were participating in the same school walkout felt very powerful and gave Sobrato students a sense of unity, he said. “The event turned out to be very reverent. I was very grateful that everyone around me was respectful as we gathered together,” he said. “We spent time to reflect on those who died and give them a moment of silence. Even though it was somber and a little gloomy with the rain, by the end there was hope.”

Central senior Belle Tabares experienced a connection with students in Parkland after hearing the students at the Florida school share speeches and songs. She felt the urge to give them a voice. She also created informational signs and hung them on campus to encourage action by writing elected officials.

“This terrible situation compelled the entire country to stand up with the victims and their families to promote positive change with school safety,” she said. “At Central, we calmly enacted our First Amendment rights and walked to a safe place in front of our school, stood quietly and bowed our heads to honor the victims.” A Live Oak High School student holds a sign during a similar walkout the same day. Students from across the country participated in some way to send a message to state and national legislators.
Photo by Marty Cheek

Every generation will have political movements that define it, said Live Oak senior Cheyenne Duarte.

“When my parents were growing up, they had to deal with nuclear drills during the Cold War,” she said. “We don’t do that now. But the fact we’re doing school shooting drills just shows generationally the world changes.”

She believes it’s important to take action now and show society students, no matter who they are or what they’ve been through, can unite and make sure their voices are heard.

“We’re often silenced by people who think we’re not legitimate or we have no say because we ‘don’t know,’” she said. “But when it comes to our lives being put into danger, it’s just incredible to see how many people really want to change what’s going on and they just don’t want this to happen where they are.”

Live Oak senior Grace Smith was impacted on a personal level by the 17-minute observance. Standing with about 200 other young people in the quad, she watched 17 students file in together and stand behind lined-up desks, each with flowers and a picture of a  Parkland victim. They read a short description of that student’s or teacher’s life. At the close of the reading, they walked away, leaving an empty desk to symbolize the loss.

“When your best friends are the ones reading the names and representing the people, just watching them walk away from the desks, it becomes a very real thing,” Smith said. “That could have actually been my best friend. And to think that someone actually has to go through that is so heart-breaking. Obviously, no one wants to lose their best friend — and especially not in such a hurtful and devastating way.” 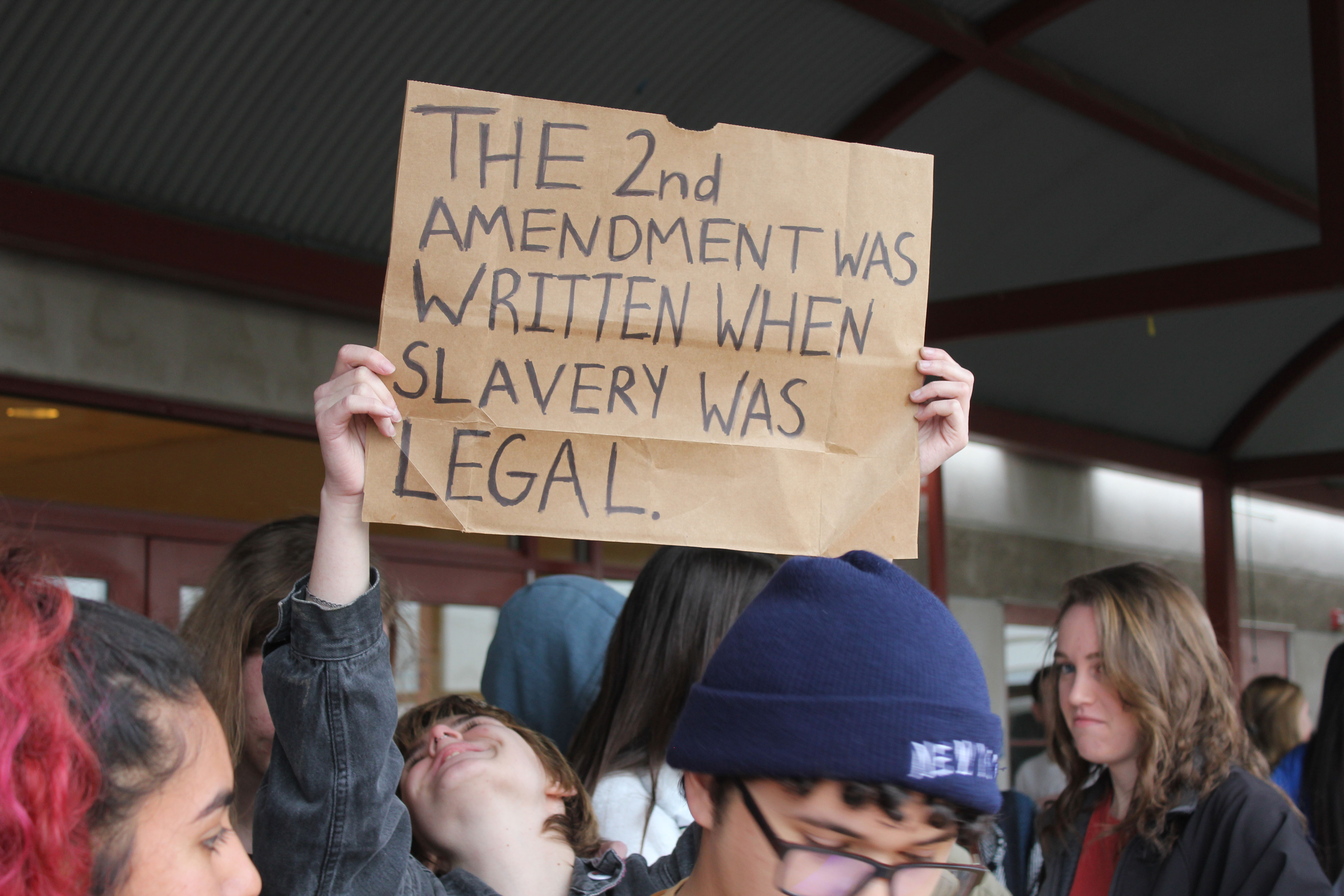 Walkout organizer and Live Oak senior Ariana Berumen — the 2018 Chamber of Commerce Student of the Year — said it was important for students to take actions that will impact their future, such as writing postcards to elected officials as well as pre-registering to vote. The organizers worked with school officials to ensure students were safe in their civic demonstration.

“Seeing everyone come together in this way made me feel like we really can make some difference, at least in our school,” she said.

One day before the walkout, Sobrato Principal Courtney Macko informed students about a threatening letter, said Sarah Ramirez, a junior at the school. The student who wrote the letter was arrested by Morgan Hill police and taken to the Santa Clara County Juvenile Hall. The police determined the threat, a felony offense, was not credible. “Hearing this, I grew scared, scared to walk out of that class, scared to walk next to my classmates,” she said. “It was a feeling I couldn’t bury. No one should have to feel unsafe in a place where learning takes place, and where people are constantly striving to better themselves.”

Despite the fears, the students walked for a brighter tomorrow, she said.

“One day, I hope these marches relay to the rest of the public that all students are affected by these tragedies,” she said. “The future leaders of the world are being killed, and if we don’t raise any awareness or do anything about it, there won’t be a future.”

Steve Betando, Morgan Hill Unified School District superintendent, and other administrators met with the student organizers at all three public schools and discussed with them how to make sure these walk-outs were safe and respectful.

“What those students across the country are trying to gain interest in is actually a civic voice,” he said. “When we noticed that some of our students were starting to respond to that, we thought that we’re going to give them the opportunity to have that civic voice in a way that is not going to create a safety issue.”

Rather than say that no students could leave or they’ll be punished if they leave, the district connected with the student leaders and asked them to communicate what their interests were and their plans so that they could help them do the walkout in a responsible way that has more meaning for students, he said.

Live Oak Principal Maria Reitano described the walkouts as initiated by student leaders who feel passionately about a number of issues and are interested in honoring the lives of those people who were lost in Parkland.

“We know they’re spreading they’re wings as adults and we want them to be intelligent, informed citizens as they are out there in the world,” she said. “We’re always trying to find the right balance and create a safe space for those students who want to participate and minimize the impact of other students who choose not to participate.”

Sruchi Patel is a junior at Sobrato High School. She is the vice president of the Women’s Advocacy Club on the campus.