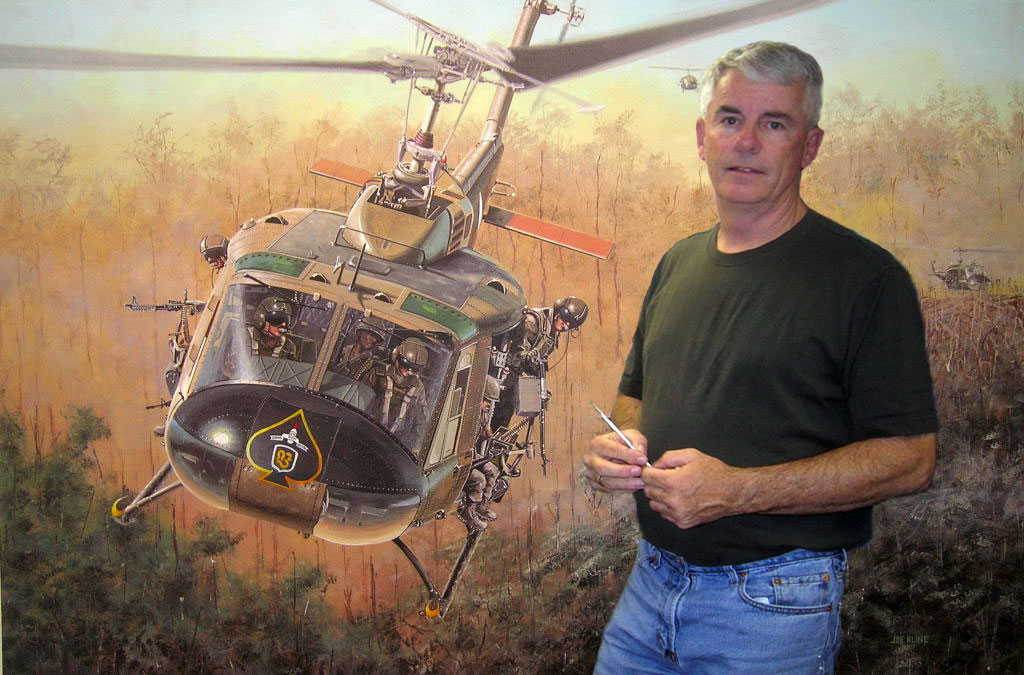 Photo courtesy Joe Kline
Joe Kline poses in front of one his creations. Kline visited Arlington National Cemetery in April to dedicate a new monument that recognizes helicopter pilots and crews who fought in Vietnam.

As the South Valley celebrates America’s freedoms this week, it’s important to remember the men and women who over the years have served in the Armed Forces. People like Joe Kline. He served in Vietnam and saw the brutality of combat as a helicopter crew chief.

The 68-year-old Gilroy resident represented crewmembers at Arlington National Cemetery April 18 because he helped design a four-by-three-foot granite monument, featuring an illustration of an UH-1 Huey chopper with its crew.

As our nation’s most hallowed ground, Arlington serves as the somber site to more than 30 monuments honoring those who sacrificed much in military service throughout America’s history. Until this spring, no one monument recognized the helicopter pilots and crews who played such a vital role in the Vietnam War. That’s why the dedication ceremony for a new monument, located in Section 35 adjacent to the Tomb of the Unknown Soldier, was so special for Kline.

“It’s not about me. I’m representing so many Vietnam crew members,” said Kline, who worked for more than 18 years as the city of Gilroy’s public information officer. “It’s very humbling.” 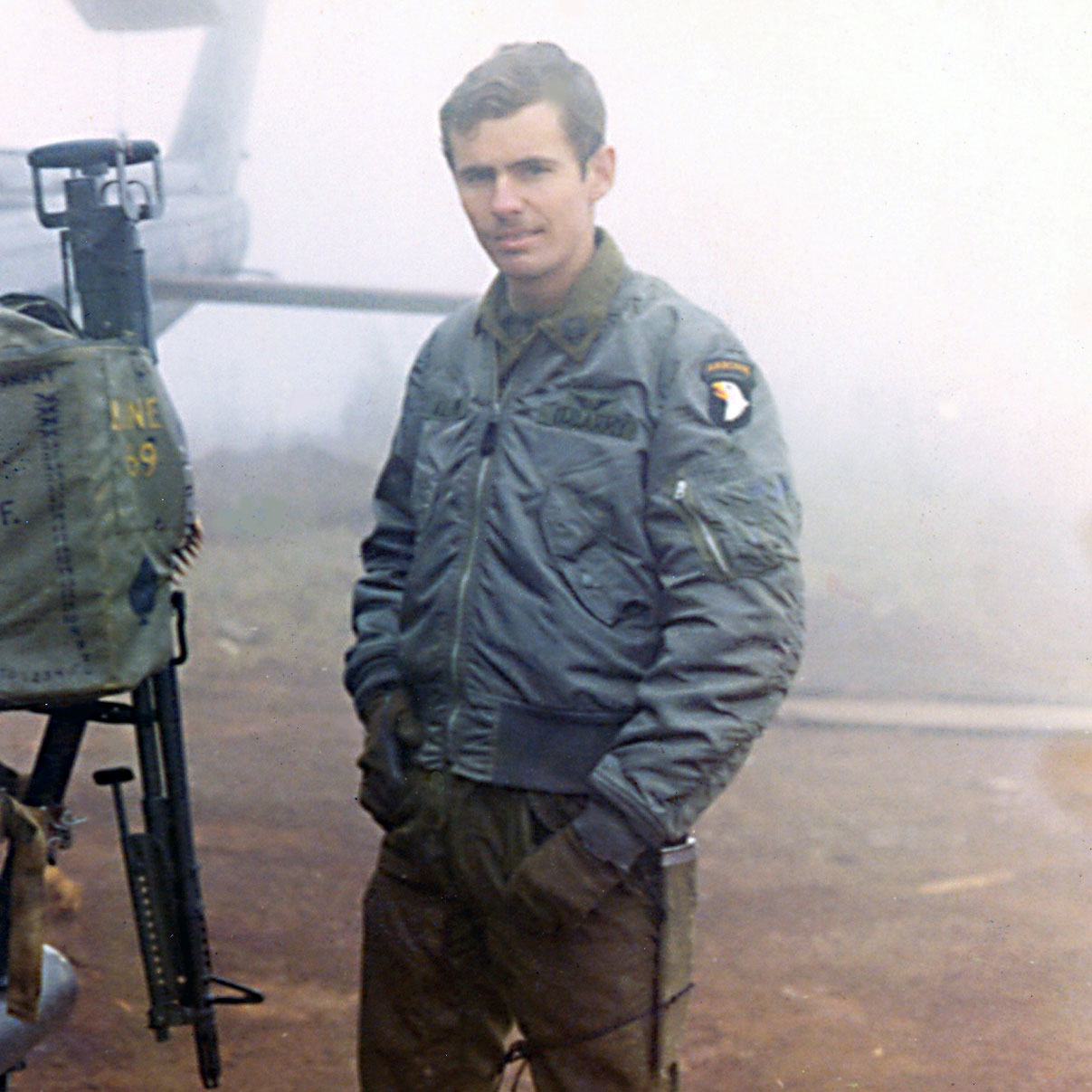 Renowned for his art, Kline modestly notes that his art has “street cred” with other veterans because he actually experienced the scenes he paints.

“The Vietnam Helicopter Pilots Association (VHPA) sought out someone who could capture the essence of rotary-wing combat through his own experience,” said VHPA’s former president Robert Hesselbein, who has led the three-year fight for the monument. “And Joe Kline gained his perspective through hands-on flying as a Huey crew chief in the Vietnam War.”

Kline’s father was a B-25 bombardier with the 340th Bomb Group in the Mediterranean Theater during World War II, which ignited his interest in aviation. His own experience with the B Company “Kingsmen” of the U.S. Army’s 101st Airborne Division only fueled that passion.

Even though the artist enjoyed painting before he volunteered for the draft in 1969, it wasn’t until after he was discharged from active duty in 1971 that he found his niche in aviation art. For the first 20 years, he focused mostly on commissions from family members of World War II veterans.

“Doing the research, then painting the one-of-a-kind original …” he recalled. “It was very emotional for the family as well as for me.”

Then in the late 1970s, he began attending military reunions with his father. These gathering of veterans not only provided inspiration for and commissions of his artwork, but also motivated him to start the Kingsmen Reunion Association in honor of his unit. 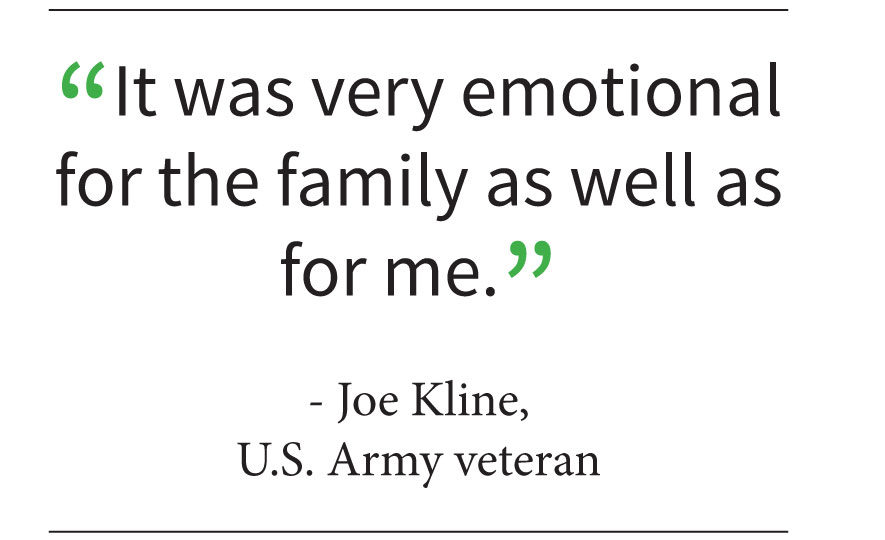 Continuing to attend military reunions and aviation artist conventions, he established himself as one of the leading artists and experts in unit markings. He gained a reputation for focusing on detail and factual authenticity, making his paintings technically and historically precise. He discovered that printing limited editions of his art was more affordable for a larger audience.

“I discovered that I could customize limited edition prints with unit markings on Army helicopters,” Kline said. “Now the print becomes personalized and one of a kind.”

His realistic paintings grace the private collections of such notable aviators as General Jimmy Doolittle and presidents George H.W. and George W. Bush. His works have also illustrated many books and magazines and are in the collections of the U.S. Air Force, U.S. Army Aviation, the Legion of Valor and the Smithsonian Air & Space Museums.

“Joe’s artistry allows veterans the chance to see a visual depiction rarely captured in photography or in other mediums,” said Hesselbein, who has Kline’s artwork in his home office. “Seeing that aircraft flying above the trees (in Kline’s painting) reminds me of my young days piloting helicopters. Most helicopter veterans agree no photograph can match his military paintings.”

That’s one reason why Kline was a natural choice to help create the Vietnam Helicopter Pilot and Crewmember Monument at Arlington. But he almost didn’t get the opportunity.

The VHPA formally requested Arlington’s approval in 2014 for a monument to honor the Vietnam pilots and crewmembers who lost their lives to save the lives of other military personnel without regard to military branch.

Vietnam is known as the “helicopter war” for a reason. There were tens of thousands U.S. military helicopter pilots, crew chiefs, gunners and medics working to secure the 67,000 square miles of South Vietnam. Helicopters served many vital functions, from moving troops to and from the front lines to rescuing wounded, transporting supplies and returning the dead to American soil.

According to the VHPA, there were about 12,000 helicopters in service during the war and nearly half, or 5,086 choppers, were destroyed by enemy fire, bad weather and mechanical malfunctions resulting in 2,165 pilots and 2,712 crew members killed.

Despite these statistics, the cemetery originally declined the monument citing the ever-shrinking real estate needed for the burial of eligible veterans.

Not deterred, the supporters of the monument wrote to Congress for a reversal, and eventually won.

Kline’s artwork will continue to paint the story of the helicopter war of the 1960s and 1970s. And the Arlington Cemetery monument he helped design will finally pay tribute to the brave pilots and crewmembers who made the ultimate sacrifice.

Christine West is the executive director for the South Santa Clara Valley Memorial District, which owns and operates the Gilroy Veterans Memorial Hall at 74 W. 6th St. The Veterans Hall opened in 1951 to welcome home veterans and provide a place for them to meet and socialize. It still welcomes veterans today and also can be rented to the general public for meetings, parties and memorials.