Seven and a half years ago, fate and a love for fine dining took Molly and Marcus Adams from high-tech jobs to a career running a series of popular restaurants throughout Silicon Valley. When the couple saw an opportunity to open four of their eatery brands in downtown Morgan Hill, they couldn’t resist coming to the community known for its passion for food and wine.

After two years of construction at the corner of Third Street and Monterey Road, the Adams’ first Morgan Hill restaurant, Willard Hicks, opened July 10 to great fanfare. It has drawn patrons from throughout South Valley who come to try out its steaks and other items on the extensive menu. The other eateries — Opa! authentic Greek cuisine, Mo’s Breakfast + Burger Joint, and Mexican comfort food Tac-oh!  — will open in the next several months.

In 2015, the Adams signed a lease with Imwalle Properties, the developer who built the restaurants on the site of a former liquor store. With a rustic charm, a well-stocked bar, and a choice of booth or al fresco dining, Willard Hicks is making its mark as the South Valley’s newest grill for top-choice cuisine. 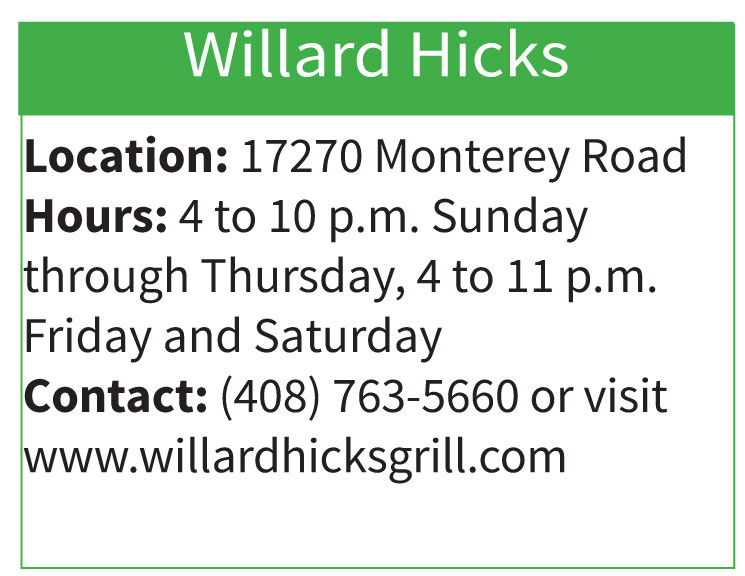 (The Adams’ second restaurant schedule to open will be Tac-oh! by late August. That will be followed by the other two in the fall.)

“When we came down here, I found I just love Morgan Hill. It’s just so charming and great,” Molly, 44, said. “The people here are really friendly. We feel welcomed literally with open arms. I thought Morgan Hill was super charming and quaint. We like to put our restaurants in these smallish type communities.”

With the reputation for excellent food and service their restaurants have built in Silicon Valley, people from the north will surely come to Morgan Hill to check out the new downtown restaurants, Marcus, 46, said. Already, he was pleasantly surprised by friends from San Francisco who popped into Willard Hicks for a dinner.

“People want to leave San Jose, and they like to come down here and discover Morgan Hill,” he said. 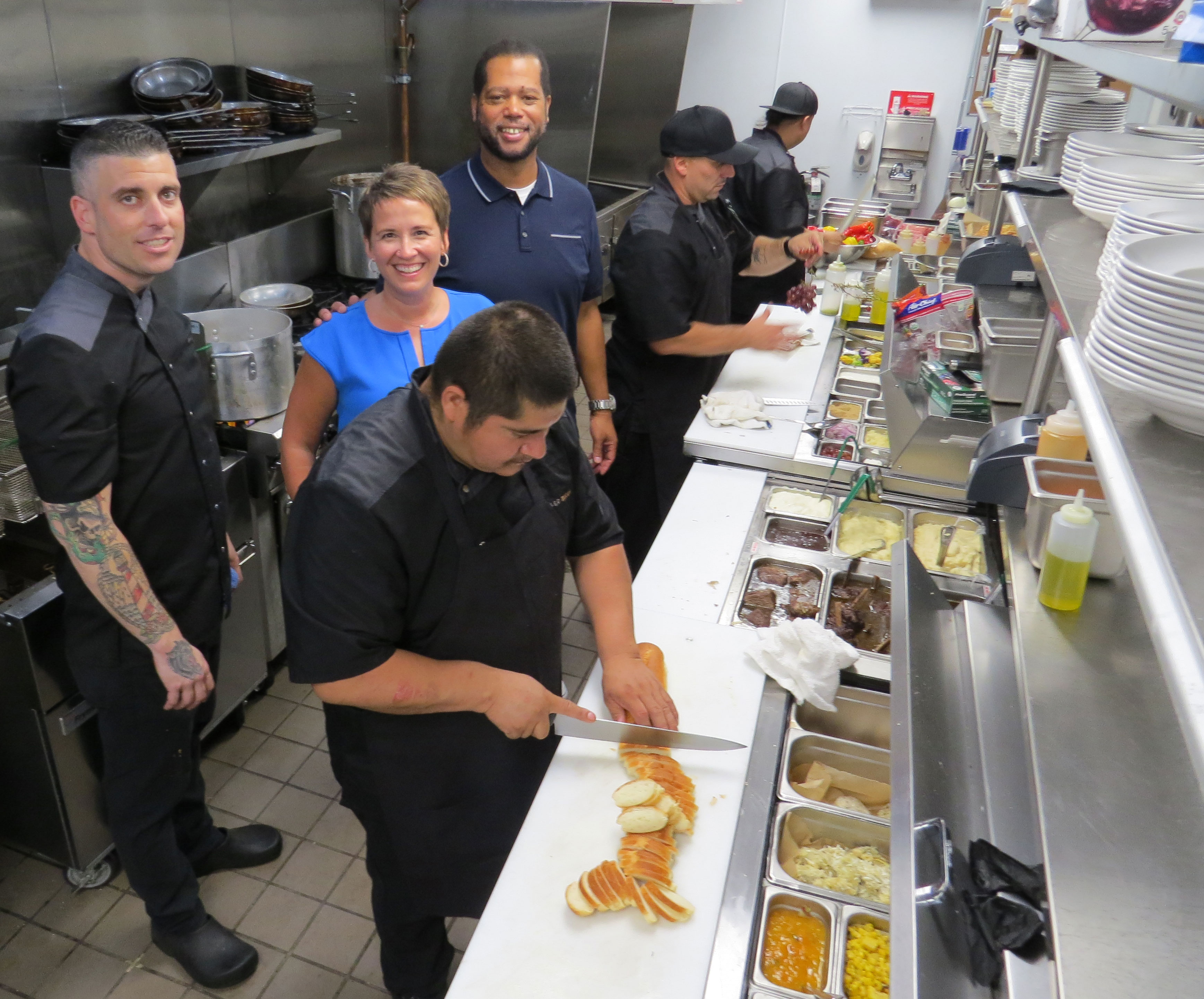 Photo by Marty Cheek
From left, Executive Chef Jonathan Toste in the kitchen with owners Molly and Marcus Adams and assistant chefs.

Molly added: “With the wineries, people are coming down here. This is now a destination and hopefully we can add to that.”

An eighth generation Texan who was raised in a small town called Lake Jackson near Houston, Molly said it was a quirk of fate that took her from the Lone Star State to building a series of four restaurant brands in the Bay Area.

“People always ask me, ‘How did you get into the restaurant business?’ And I tell them, ‘Oh, it was a complete accident.’”

She worked at a satellite office in Texas for Mountain View-based Silicon Graphics and liked the computer company. When her contract ended, she was invited to come to work in the company’s headquarters. At 21, finding she was ready for a bit of West Coast adventure, she took the offer.

“I knew only one person in Silicon Valley. I had only $300, I’m not kidding,” she said. “I packed my car and literally drove 30 hours.” She stopped at motels for sleep, paying for the room with her mother’s credit card.

During her time at Silicon Graphics, she met Marcus at a party at the Agenda Lounge in downtown San Jose. He worked there as a DJ at night and for network company Brocade during the day. They married, and after several years of working at high-tech companies and startups, in 2011 Molly decided to try something different. “I told Marcus I really want a change of pace. I wanted to retire from high-tech. So, we started looking at small neighborhood bars, lounge type things.” 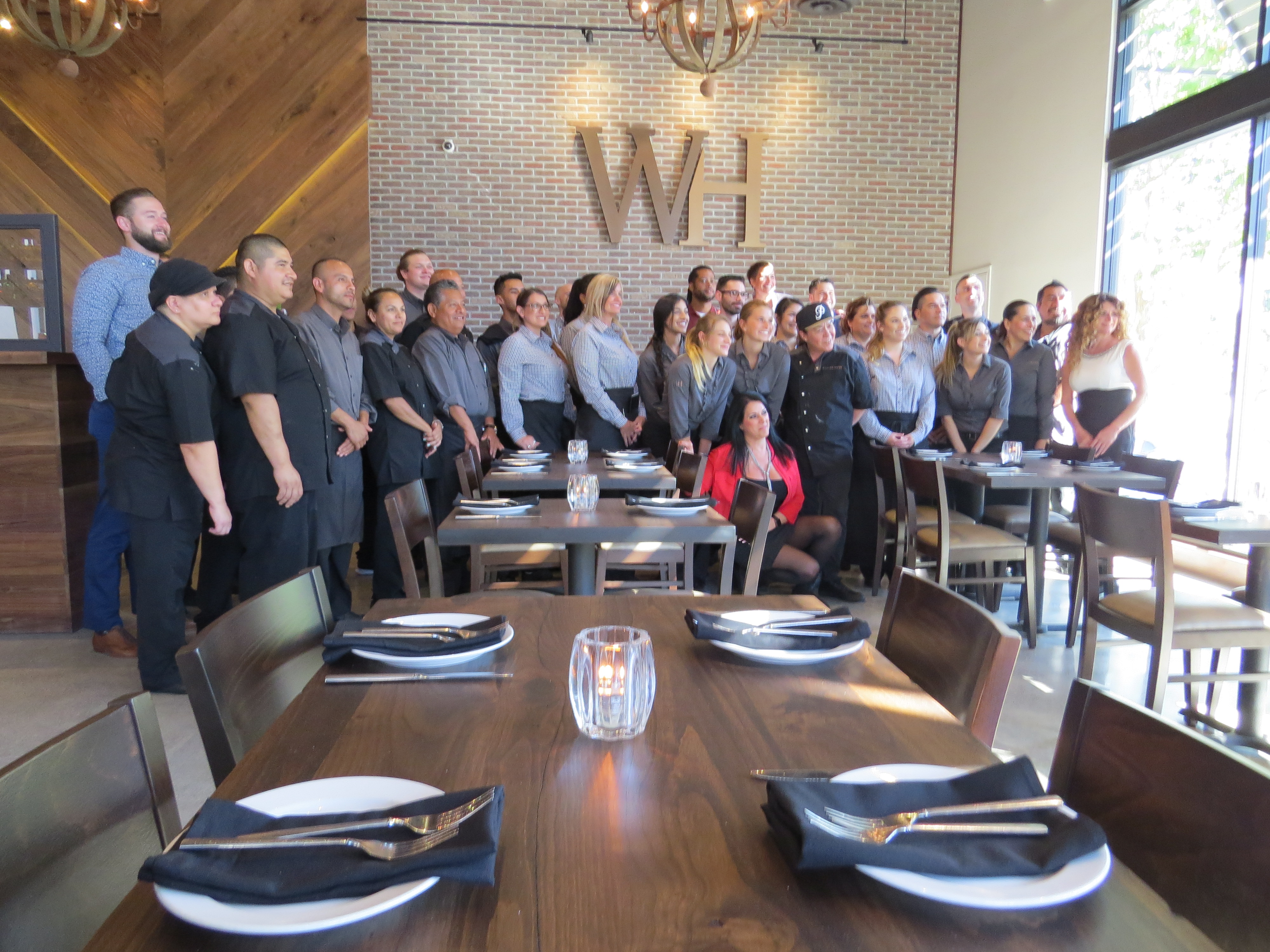 One of her favorite places to dine was Opa! located in the Willow Glen neighborhood of San Jose. Soon, the Adams found themselves in a partnership as owners of the Greek cuisine restaurant.

“We always thought Opa! would be the only brand,” Molly said. “But fast-forward, there’s been these opportunities and these situations like this (in Morgan Hill) that basically got us further into the restaurant business. I got into the business thinking I wanted a change of pace, but I got a change of pace more than I thought I would.”

Mo’s was born because Marcus and a former business partner loved burgers and breakfast and they thought there was a need for an easy-going eatery in Campbell. The brand expanded to include Almaden and soon Morgan Hill. Tac-oh! started in Willow Glen in the spot where Opa! was born after the Adams moved the Greek cuisine eatery to a larger space. Later, they moved the first Tac-oh! to downtown San Jose in the same building as Agenda.

Willard Hicks was born when an opportunity to open another restaurant in the space in Campbell came up. The Adams wanted a steakhouse but couldn’t agree on what to call it. Then Molly’s sister suggested naming it after the streets the couple’s first family homes in San Jose were located — Willard Avenue and Hicks Avenue.

The couple looks forward to opening their three other Morgan Hill restaurants soon. Marcus is even bringing his love of music into Willard Hicks with DJs performing. And he sees a possibility of one day including live music performed in the patio area.

“There is literally never a day that’s like the last day,” Molly said of the restaurant business. “But I would say more than that, I really like the people part of it from everything from our guests and being able to share food with them and share an experience with them. And hopefully if we’re doing what we’re supposed to do, we’re keeping them happy.”