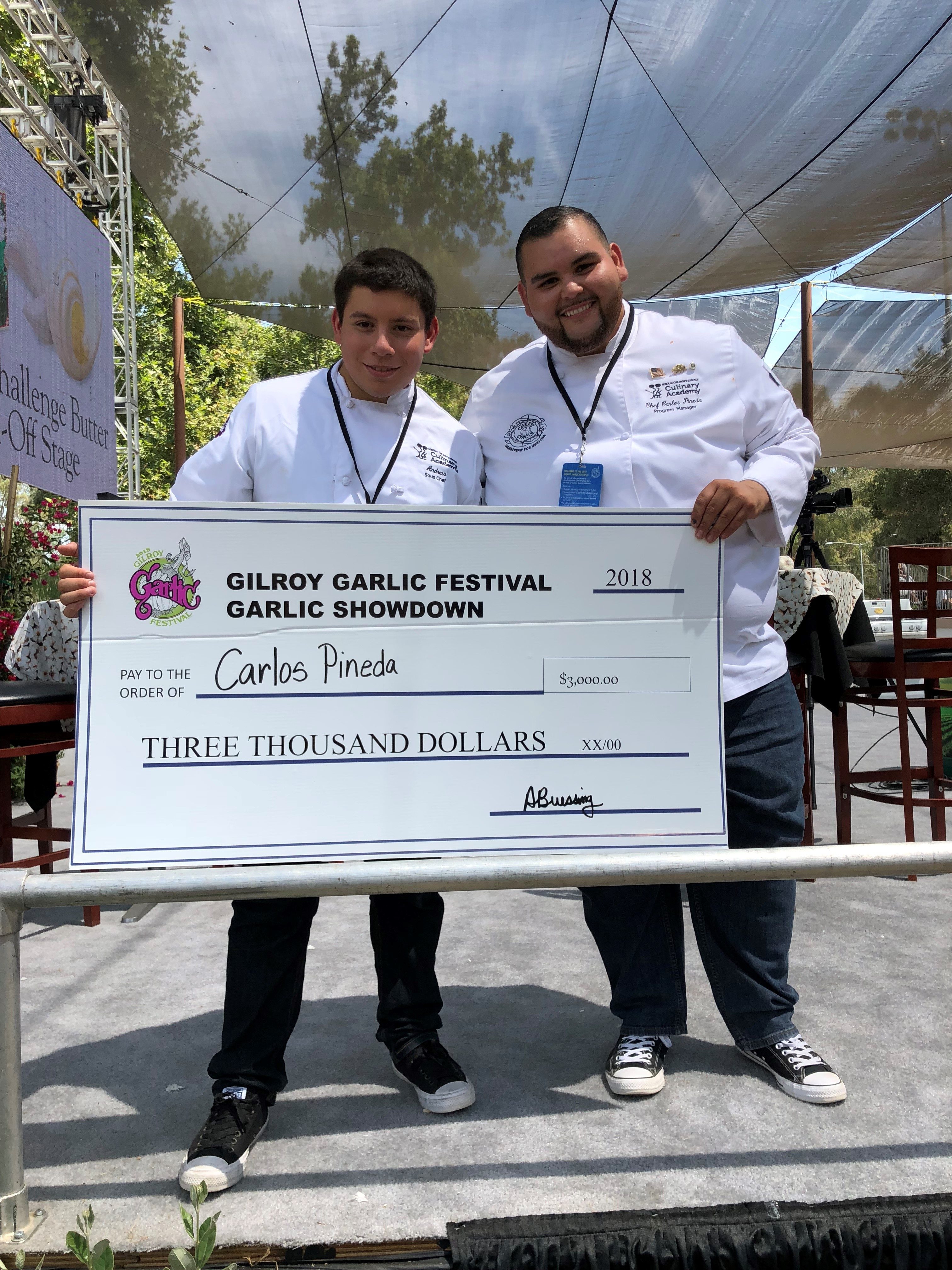 The four chefs had exactly one hour to prepare dishes using dried and fresh prunes and plums — and, of course, loads of garlic — in an “Iron Chef”-style competition that took place on the Challenge Butter Cook-Off Stage Sunday, July 29.

As host of the competition, Symon bantered with the judges, the chefs and the garlic fans to help ease the tension as the minutes counted down. He asked Bill Christopher, CEO of garlic producer Christopher Ranch, what he’d be looking for when judging the dishes prepared by the professional chefs.

Symon has competed in 42 “Iron Chef” contests and has won 34. He told the audience that from his experiences on the show, he’s learned that the mid-point is when he has a hunch if he’ll succeed in his decisions on how to bring his ingredients together. 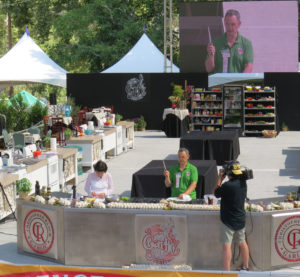 “That’s when you really need to know how you’re going to finish. You’ve got to double-taste, you’ve got to go through everything,” he said. “The half-way point is when you’re going to know if you’re going to succeed or fail in this competition. Right now is when these guys know if the dish they picked is a mistake or it’s going to get them to the finish line.”

Symon spoke fondly about his wife, Liz Shanahan, whom he met when both were working in a restaurant 30 years ago.

“She’s a great cook. She’s also a sommelier, so she’s blessed with a really good palette,” he said. “My wife is vegetarian, which is God’s little joke on me. It’s like, ‘We’re going to make you really good at cooking meat, but the women you fall in love with will never eat it.’”

Symon’s entertaining of the crowd made time go by quickly. Suddenly, the 60 minutes were nearly up.

“OK you guys, we’ve got 30 seconds left on the clock,” he announced. “So if you don’t have food on the plate now, you’re basically in big, big trouble.”

He inspected the dishes being hurriedly given last second garnishes. “Alright! The food is looking fantastic. We’ve got the shrimp. We’ve got the stuffed chilies. Looks like everyone is finishing on time. OK, you guys, we’ve got 10 seconds. Anything that’s on the plate has got to be on the plate now.”

After they took their time savoring each dish and considering the creativity and quality of the cooking, they made their decision. The crowd applauded when Symon announced that Gilroy’s Carlos Pineda won for the second consecutive year.

The judges were impressed with Shrimp Chimichurri with prunes and plum concoction Pineda and his 19-year-old sous chef, Andrew Briggs, prepared. The chef is the program manager at the Culinary Academy and Kneaded Catering Company at Gilroy’s Rebekah Children’s Services. The program enables disadvantaged youths to gain hands-on culinary skills in the nonprofit’s commercial kitchen.

He plans to donate the prize money to support the program.

Having the opportunity to compete with other professional chefs that come from different backgrounds, cultures and levels of expertise will always be fun, Pineda said.

“It’s always a chance to learn new ideas, techniques, styles and see what other chefs can do with the same ingredients,” he said. “It’s just another level of education and one is never done learning. It’s like a saying that one of my past students once taught me: ‘learning is food for the soul.’”