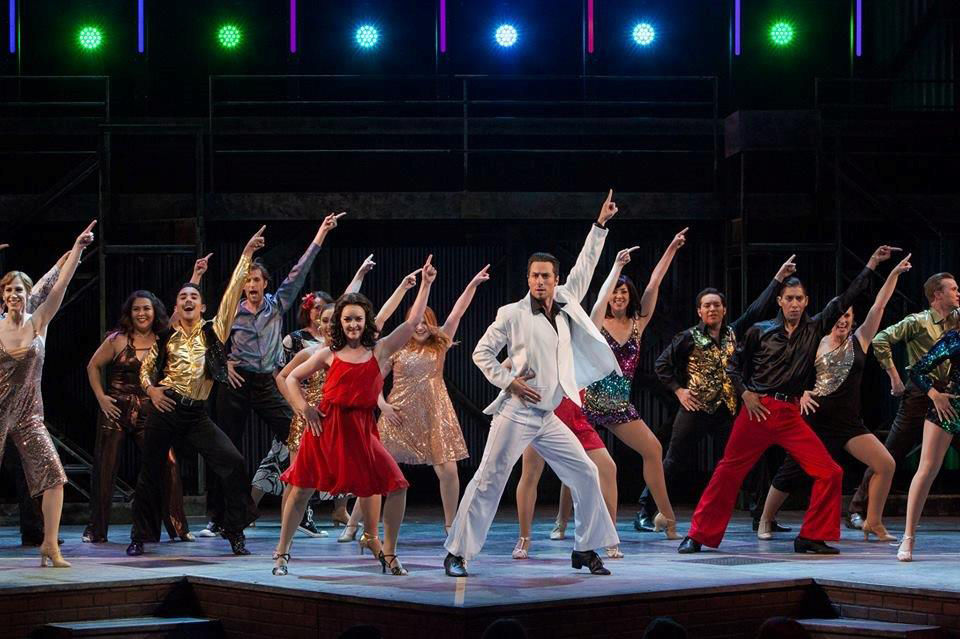 “Saturday Night Fever” soars on to the Fox Theater stage with the vigor of a roller coaster at its peak speed. It features the fun and fast disco songs by the Bee Gees that some of us are still humming since the musical opened on Broadway in 2000. The theater vibrates for more than two hours with an amazingly energetic cast of singers and dancers who never seem to stop moving.

Based on the 1977 John Travolta movie, the show’s story tells of the emptiness of the lives of the young men and women of Brooklyn in the mid-‘70s where jobs and money are in short supply — and what work might be available is boring and pointless. To let off steam they usually end up at the local discotheque and dance the night away. We get to examine the life of Tony Monero, (an animated Nick Bernardi ) who find his disco dancing attracts the young women and is his best outlet for all his feelings and desires.

An impressive cast of dancers with solid, clear voices deliver the beloved disco songs with the gusto they deserves. “Staying Alive,” “Top Of Your Game,” ” Disco Inferno,” “100 Reasons,” and “More Than A Woman” are of a few of the tunes offered.

The production is adeptly directed by Josh Marx who moves his people with a definite purpose. An impressive 10-piece orchestra under the capable baton of Alicia Jeffrey carries the show to a professional level. Tammy Berlin’s costumes touch the fashion of the time, with lively choreography by Nicole Helfer. Kelly James Tighe sets, Aaron Spivey’s lighting and Zak Stamps sound add to the production. The show goes nowhere without these people.

“Saturday Night Fever” will give a reminiscing moment to those of the ‘70s and will bring a new light to the kids of today. The Bee Gee’s music is still a delight.