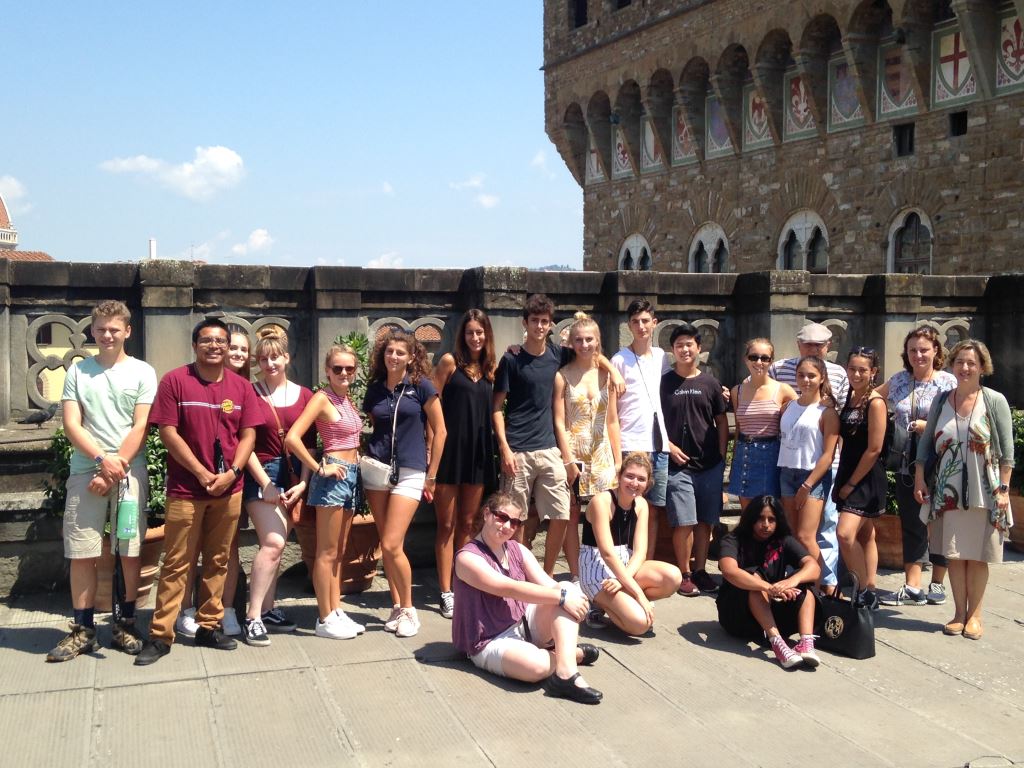 Morgan Hill students and their Italian hosts enjoy a day trip to the city of Florence during their recent trip to San Casciano, one of Morgan Hill’s sister cities. Photo courtesy Amy Whelan

even South Valley teens enjoyed the trip of a lifetime when they journeyed to the Italian Province of Florence and toured the region for nearly three weeks in local family homes in San Casciano in Val di Pesa, a Sister City to Morgan Hill.

The students left Morgan Hill on July 16 and returned Aug. 3. The Italian host families had teens who helped show the American students their culture and way of life. Morgan Hill residents Amy Whelan and Pier Antoniucci served as chaperones.

“We had the benefit of seeing firsthand what living with an Italian family is life,” Whelan said. “It’s also a great, great benefit for the kids because they didn’t have to come up with the cost of housing in hotels or Airbnbs. It really made the trip possible for a lot of kids who were not able to afford it otherwise.”

The students participated in many fun tourist activities to discover the history and culture of the hilltop town in the heart of Tuscany. Those included: 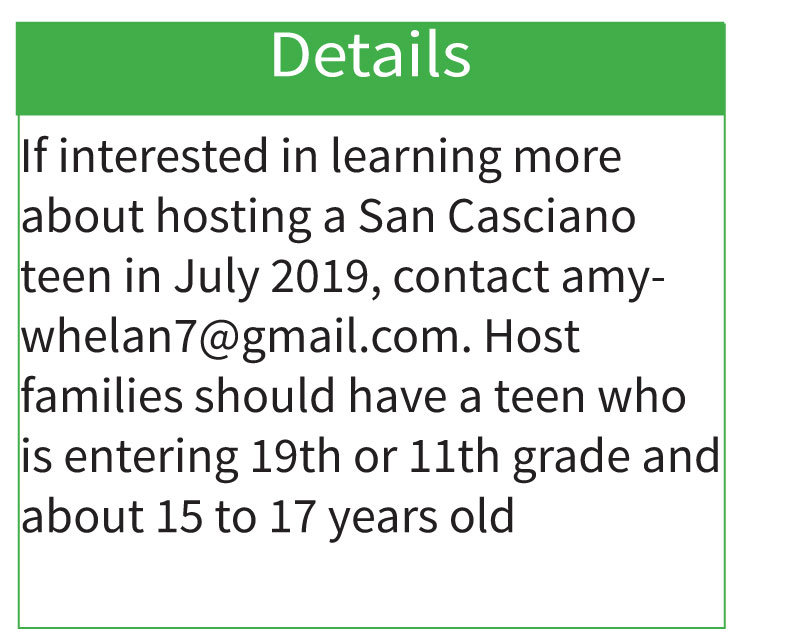 The Morgan Hill visitors were also treated to the local olive oil, most notably, that of the Azienda Agricola Mori Concetta, a family business specializing in both olive oil and Chianti wine. The business has earned several national and international distinctions and awards for its excellence, Whelan said.

In July 2019, Morgan Hill families will host Italian teenager from San Canciano. Residents interested in finding out more about hosting an Italian teen can email [email protected] Host families should have a teen who is entering 10th or 11th grades and between 15 to17 years old.

The nonprofit organization Sister Cities International believes in giving anybody interested a chance to connect to the world, especially young people, Whelan said. A student exchange program is also done with Mizuho with middle school-aged children.

“We want to be able to open up programs that give teens the opportunity to see that, yes, there is a big world out there and you can connect to it through technology, for sure, but you can also connect to it in person,” she said. “And there’s some really valuable experiences and lifelong memories you make when you visit a place in person. Everything you learn about in school books and projects, you can see those things come to life when you have a chance to get out there in the world.”

Among the Morgan Hill students who visited San Casciano, Ulises Alcalde, 18, a senior at Live Oak High School, described how visiting the ancient Italian town of nearly 9,000 gave him a chance to explore the culture and personally see how beautifully unique the region of Tuscany is.

“I enjoyed how everything about the program was structured, and how every part of the town held a little piece of history,” he said. “I also enjoyed interacting with the townspeople. They were so polite and eager to interact.”

While in Italy, Alcalde gained an appreciation for the country and its citizens’ daily style of life.

“The food there was quite different than I expected, but it was delicious,” he said. “The driving in Italy may have shocked me a bit since it’s totally different than what I was taught here, but every country has its standards.”

The lifestyle that many young teenagers have in Italy fascinated him.

“They have much freedom and are capable of doing a lot, such as traveling, even though they are still young,” he said. “For them, driving or traveling to another country, such France or Austria, is an easy task.”

Traveling helps young Americans gain an appreciation for many things around the world because every country is different and beautiful in its own way, he said. Americans can learn  about the different cultures and how to respect them and see the beauty of it.

“Traveling allows Americans  to see the many different lifestyles and many people around the world life on a daily basis,” he said. “I enjoyed Italy very much and am looking forward to hosting one of the Italians (next summer). If possible, I plan on coming back to Italy once I master the language so I can visit the Italians that I now call my friends.”

Niah Carrender, 17, a student at Ann Sobrato High School, also enjoyed his summer trip through the Sister Cities program. He especially enjoyed the architecture and the history.

“Seeing places within San Casciano — even a tower more than 1,000 years old — and cities like Rome, Pisa, and Siena, it was very interesting to be in a place where all the buildings have such a long history,” he said.

One interesting thing that he learned about Italy is that teens can get a motorcycle license at 14.

“It gives them a lot of freedom, especially in a smaller, drivable town, like San Casciano,” he said.