Parishioners invite all to Oct. 28 potluck lunch at the downtown church 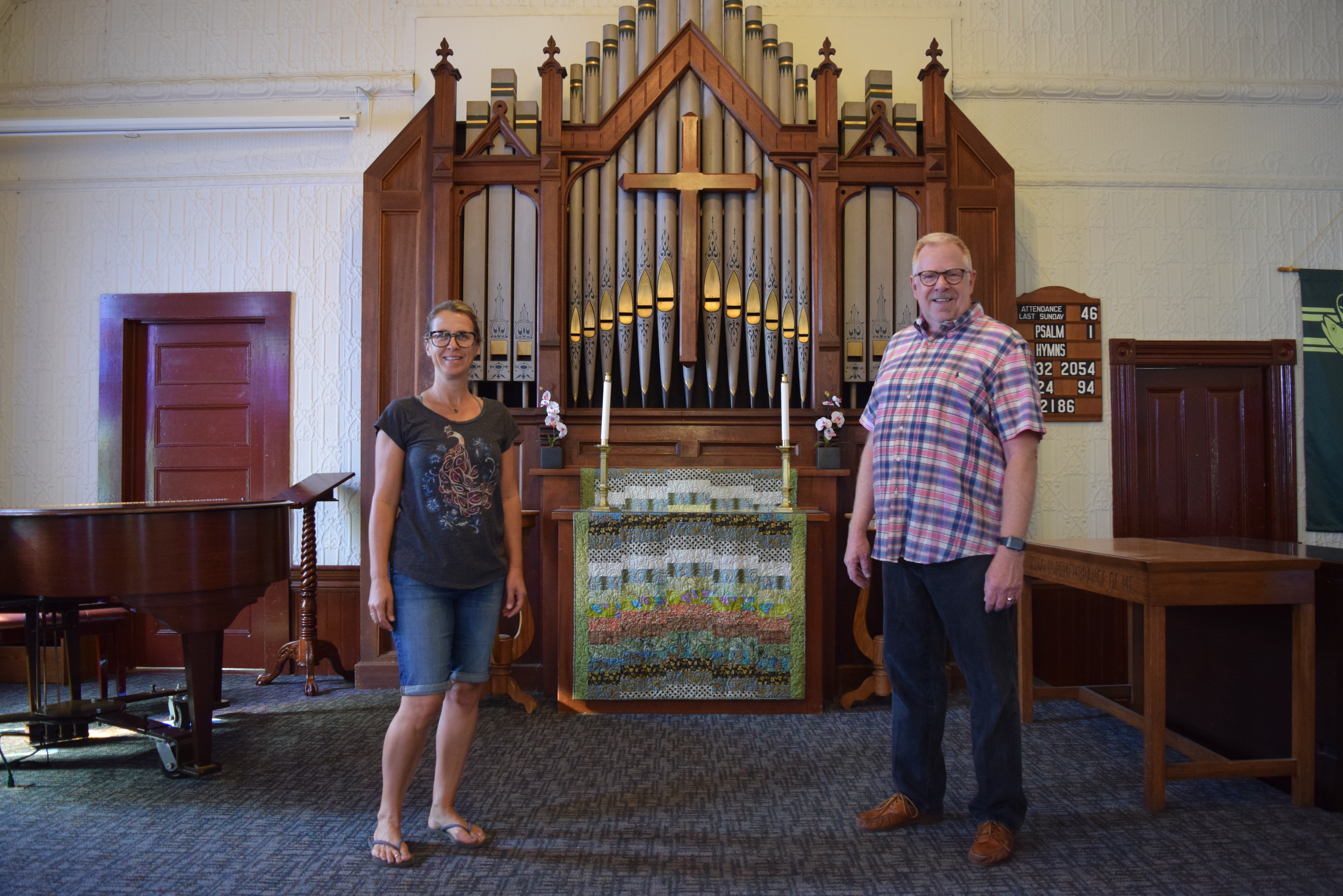 The “Old Lady” turns 125 years with a big birthday bash. And South Valley residents are invited to celebrate at a potluck lunch open to all to commemorate the colorful history of the iconic Morgan Hill United Methodist Church.

The construction of this religious building reflected the hopes of a Morgan Hill transitioning from a small railroad stop into a growing farming village during the late 19th century. In 1893 as a gesture of goodwill, the Phillips Land Company donated $50 and three lots at the corner of Monterey Road and Fourth Street to the newly-formed Methodist congregation. Today, the classic American Gothic-style clapboard white building stands proudly as one of the oldest buildings within the city limits.

The church’s first pastor was O.M. Hester. The membership of the church has grown considerably during the years. The original five members were Mr. and Mrs. Woodard, Nellie Woodard, Miss Lottie Stephens, and Henry Toziaer. Mr. and Mrs. Charles Stone moved to Morgan Hill in November 1893 and became the sixth and seventh members.

Today, Rev. Patrick Davis serves as the church’s 37th pastor, presiding over a congregation numbering about 150. He and the church members will host with the Morgan Hill Chamber of Commerce a ribbon cutting at 10 a.m. Oct. 28, immediately followed by a special celebratory service. At 11 a.m., the church will host a community lunch free for everyone to attend. 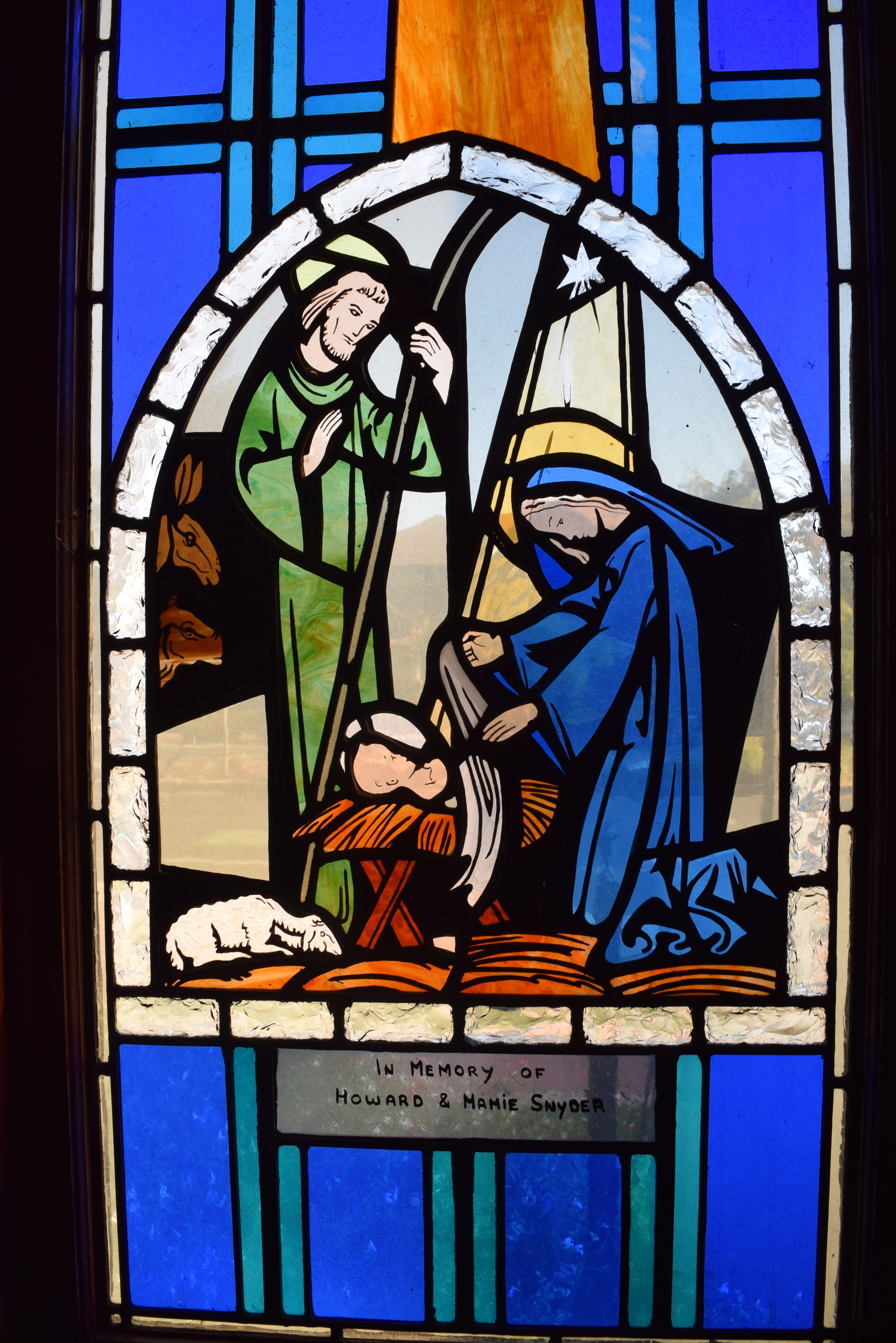 Photo by Marty Cheek
A stained-glass window in the chapel.

“I call it ‘The Old Lady.’ It’s been an iconic building since Morgan Hill was founded,” Davis said. “People see it as a part of the community because it has served the community in so many different ways over the years, particularly reaching out and helping the homeless people in the community.”

Over the years, the small chapel has witnessed a parade of parishioners fill the pews and hear many sermons reflecting the times. It’s also served as the site of thousands of baptisms, marriages and funerals. For a short time until Machado School was finished in 1895, the building served as a schoolhouse on weekdays for children living on nearby farms. Today, on most Wednesday nights, volunteers serve a hot meal to the homeless in the church meeting room.

“It might be called United Methodist Church but in an iconic way, it is the community church,” Davis said. “And I think it’s been well supported by the community over the years.”

To help fund the construction of the church, the founding congregation sent one of its members, Catherine Stone, to the post office on the day that working men called for their mail and she would ask them for a donation. Cunningly, because she didn’t know their names, she arranged for the postmistress to call the men’s names aloud as they were handed their mail. Then Stone would bid the gentleman worker a friendly hello by name and ask him for a donation.

Redwood lumber cut in the forests on Mt. Madonna, milled in Gilroy, and hauled by wagon to the site was used to build the church. At that time, the population was made up mostly by farm families or the hired hands of cattle ranches. In those turn-of-the-century years, the church witnessed a parade of travelers journeying by foot, on horseback, carriages and horse-drawn wagons along the dirt-packed Monterey Road. Sometime soon after the main chapel was finished, a meeting room was added. The parsonage next door was built in 1895, and this simple white-painted building still stands beside the church, adding small-town charm with a white picket fence standing as a sentinel along the front lawn. 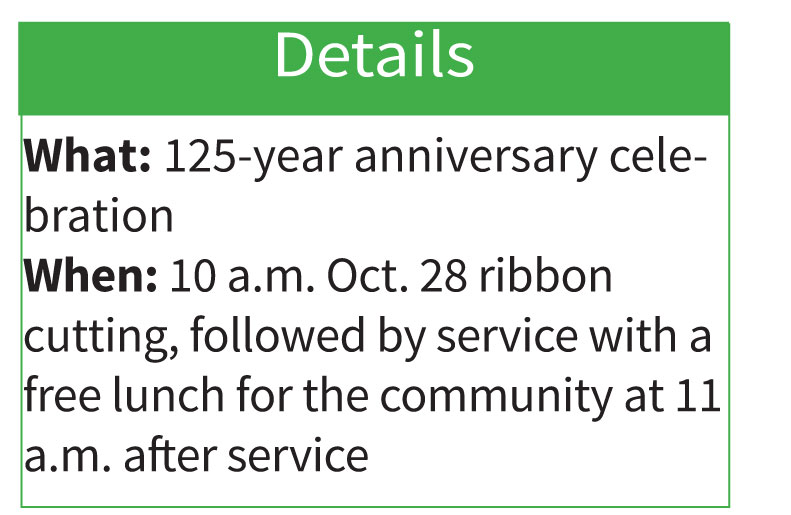 Decorating the chapel, a series of stained-glass windows brings sunlit color into the sanctuary. A goal of the church is to one day renovate these works of art and place them in a chronological order following the life of Jesus, Davis said.

“They got them out of order because they had to place them as people got to choose where they wanted them because they were donating for a window,” he said. “And so they just started putting them in as money was raised.”

In the 1920s, workers moved the church 10 feet westward to widen the road for the new transportation technology of motor vehicles which were starting to roll along a newly paved highway. Last year, parishioner Mary Richardson led a challenge to restore the church to its original glory. Volunteers pulled out the worn carpet and found a tongue-in-groove floor made from the redwood lumber. They sanded, stained and varnished the wood to bring out the natural look. Ornately carved pews salvaged from a Marina church were installed to replace the 1970s-style seats that had been pulled out. With more restoration and continued upkeep, Pastor Davis hopes the elegant church will last another 125 years — or more. 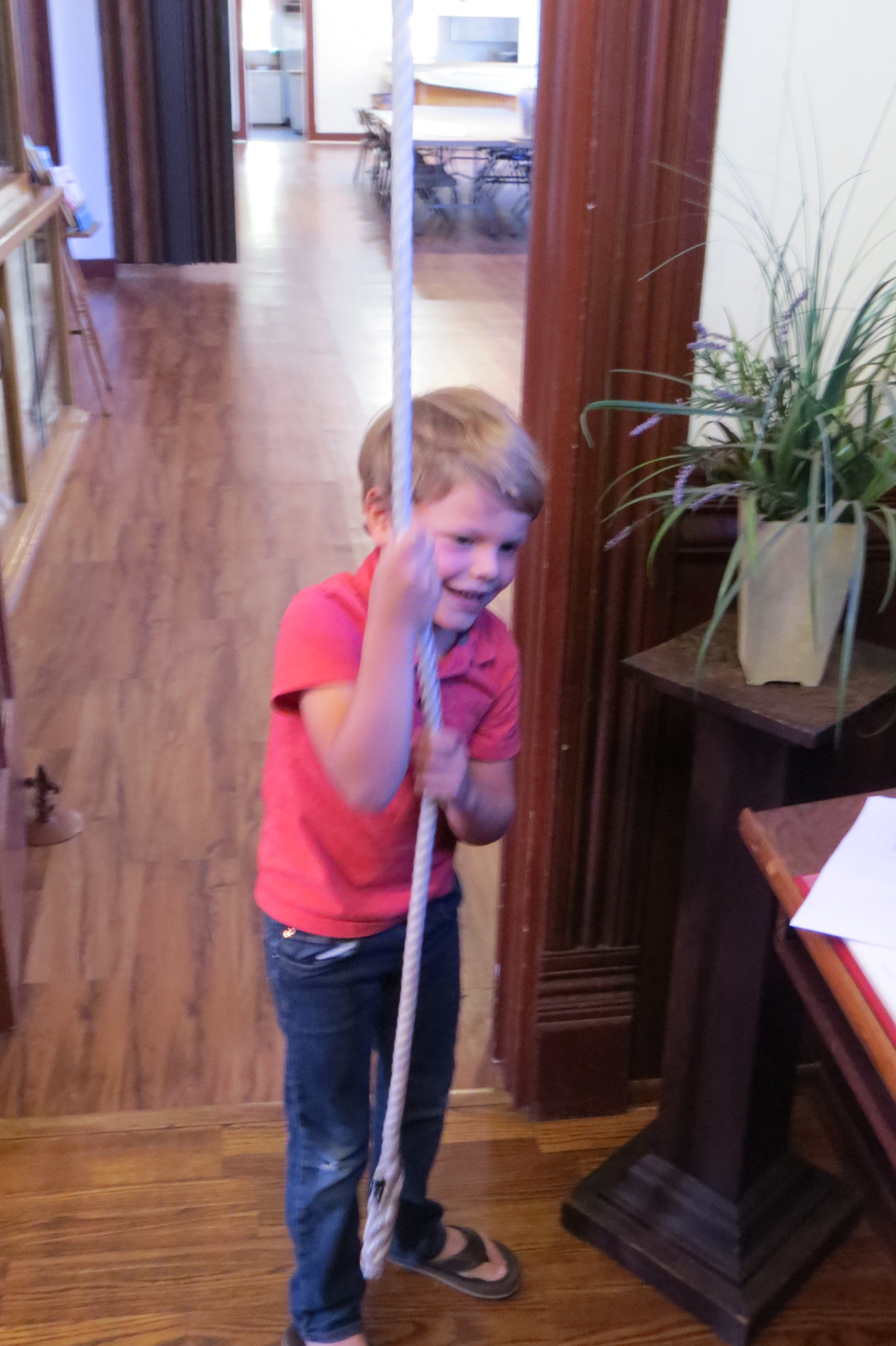 Photo by Marty Cheek
Ollie Morris, 5, rings the church bell at the beginning of the Oct. 14 service.

In 1894, the Ladies’ Aid Society raised $85 to buy a church bell to call the community to worship. That same bell has rung in the tower ever since. In more modern times, a carillon was installed in the bell tower with speakers that play favorite hymns during the day on the hour. Last winter, PG&E turned off the power for repairs, and that action disrupted the timer so that for several nights, the carillon played church hymns at 2 a.m. to downtown’s empty streets.

For the 125th anniversary celebration, the church is launching a $60,000 funding campaign to pay for needed renovations, Davis said. It hopes to receive donations of $100 or more from 600 individuals and business in the South Valley to help pay for a paint job, a new roof and other much-needed projects.

“We’ll take whatever they want to give — they can give us as little or as much as they want,” he said. “We hope they can give at least a hundred dollars to help keep the building looking good. Mayor Steve Tate and the city council have done a great job in renovating that whole downtown area. We want the church to be a part of that.”