Local residents honor those who served in U.S. Armed Forces

Veteran Eddie Bowers has presided over the ceremonies since 1991 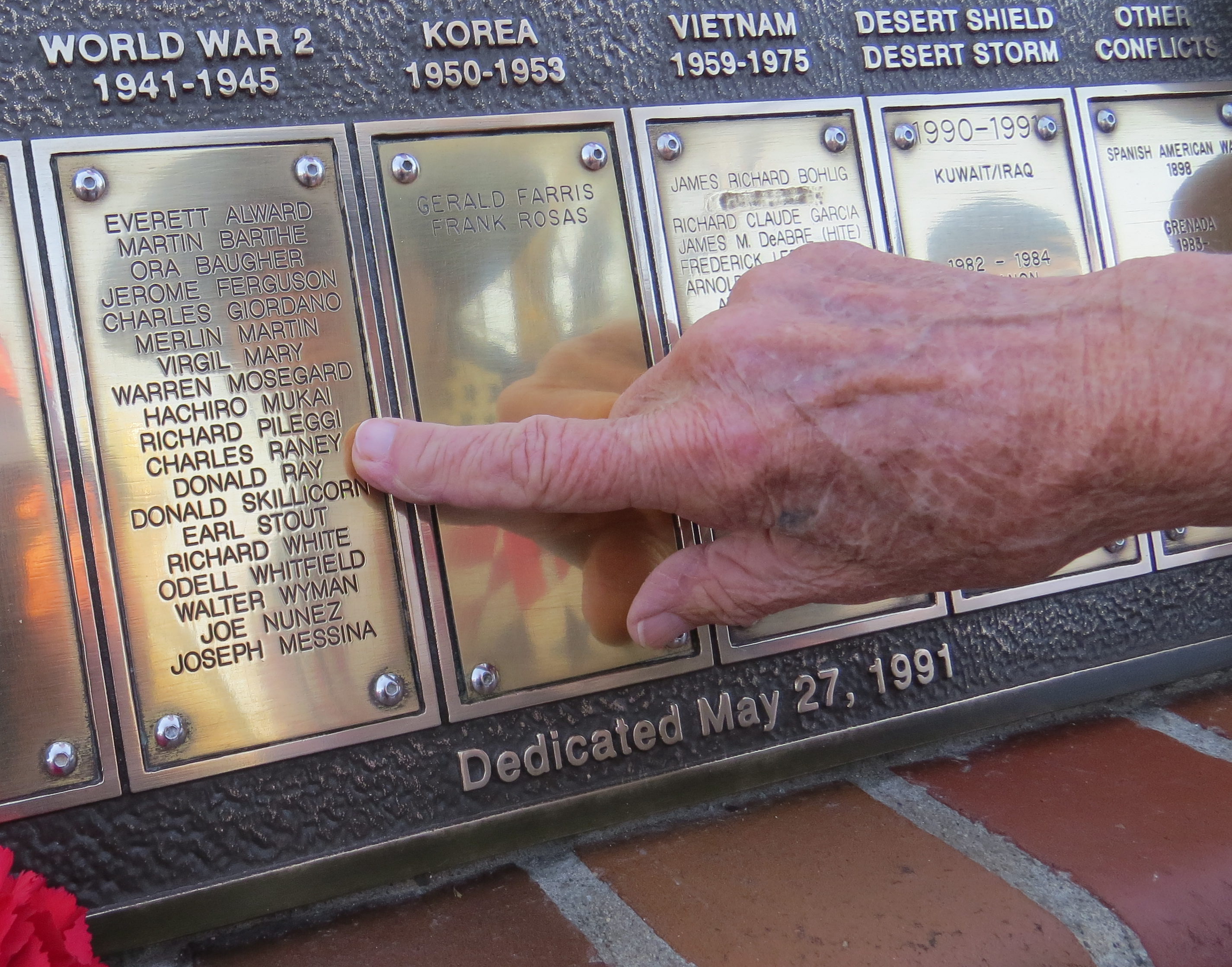 Photo by Marty Cheek
On the downtown veterans monument, Carol Agaliotis points to the name of Charles Raney, her uncle who died serving in World War II.

A century ago, the end of “the war to end all wars” gave humanity a hope for permanent peace that, unfortunately, never came true.

With the close of the multi-nation conflict Nov. 11, 1918, people celebrated the ending of the widespread European slaughter and destruction. More than 40 million soldiers and civilians died during what at that time the world called “The Great War.”

A century later on a sunny Sunday morning, about 100 people gathered around a simple monument of stones surrounding a flagpole in downtown Morgan Hill. They came to remember those who died in the military conflicts since 1918. From a 94-year-old veteran of World War II to those who have recently spent time in Afghanistan and Iraq, the South Valley community took time Veterans Day to honor local men and women who served America in the Armed Forces.

Among them was Carol Agaliotis who pointed at the name of Charles Raney on the brass plaque engraved with the names of Morgan Hill residents who died serving since World War I. The youngest of her grandmother’s seven children, her uncle left college to go into the military. Raney died at age 22 after his plane had been shot down by the Japanese in the South China Sea.

“He had only been married two weeks and never had any children,” she said. “It was Easter Sunday and my grandmother woke up very disturbed and said, ‘I had a dream last night that Charlie was calling me from out of the waves.’”

The premonition proved true. A military service chaplain came to her house four days later and told her that Raney had died at that time.

Veterans Day holds a special meaning to Agaliotis. Three of her 11 children have served in the Armed Forces … a son in the U.S. Marines and a son and a daughter in the U.S. Army.

“The military means a lot to me. And the remembrance on Veterans Day is very important,” she said. “It’s hard to get it through to young people that freedom is not free. We never knew what Charles could have become.”

The men and women who step into uniform to protect America — and their families — make many sacrifices for their fellow citizens, she said.

“Those are the guys who keep us free today,” she said. “It’s up to us older people to get these young people to understand that.”

The annual Nov. 11 Veterans Day ceremony, as well as the annual Memorial Day ceremony in May, is organized by Vietnam veteran and Morgan Hill resident Eddie Bowers. He served two years on helicopter gunships in that South Asia conflict. On Memorial Day May 27, 1991, he and fellow veterans dedicated the simple Veterans Memorial Square in the downtown median at First Street. The plaque keeping the names of those who died in combat reads: 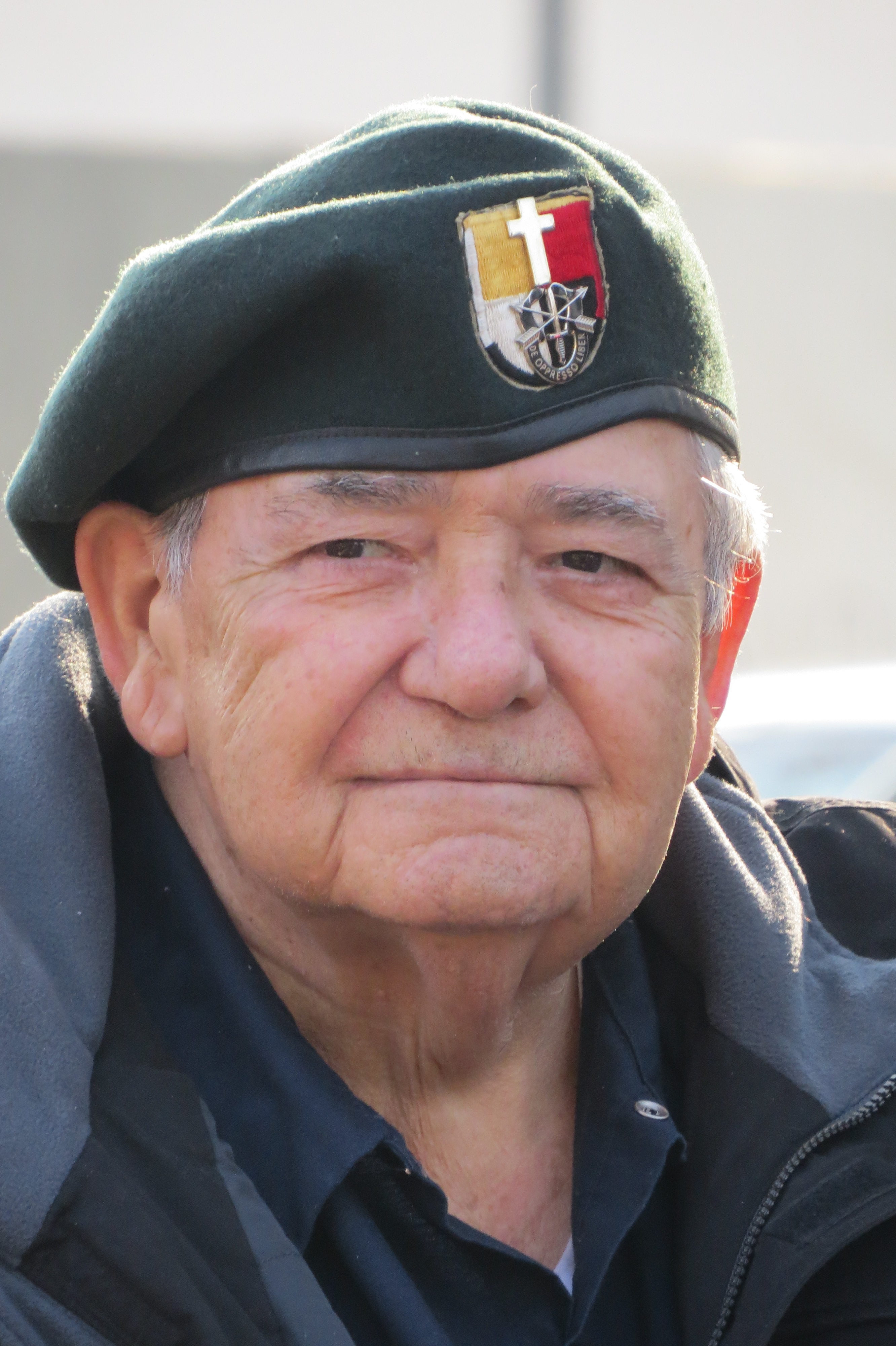 “In honor of all the men and women who fought, gave their lives and remain missing in defense of the United States of America and the ideas for which it stands. May we never forget that freedom is not free.”

“When I was in Vietnam, the thing that bothered me most about dying was being forgotten,” Bowers said explaining why the memorial and the annual ceremonies were started. “A lot of soldiers who go off to war need to know that we’re not going to forget them. That’s why we do this.”

Johnny Zaucha and his wife, Mandi, and daughter, Kenna, stood under the American flag after the Veterans Day ceremony ended. The Morgan Hill resident had joined the U.S. Navy soon after graduating high school in 1978. He served in the SEALs.

“It was a hard time for the military after Vietnam. (Congress) wouldn’t fund us for anything,” he recalled. “They wouldn’t even give us bullets back then. Things were pretty bad. It was a black eye for our country.”

Even today, American society often does not honor veterans as much as they deserve, he said. Many veterans coming home from Iraq and Afghanistan commit suicide. Many are homeless. They received medals from the military, but they also need to receive assistance to adjust back to a civilian world.

“The medals represent so much more than just a piece of metal,” Zaucha said. “It represents the hurt and the injury. You see so many young men coming back damaged. They’re not getting the help, just like after Vietnam. I’m so proud of Eddie. He does so much for the vets in Morgan Hill.”

It takes courage to join the military, even in times of peace. Veteran James Avena joined the Army soon after high school and remembers the fear he felt during the initial training.

“It was pretty scary,” he said. “I was a good kid. My dad, unfortunately, was an army recruiter. So, when his quota was low, he recruited his relatives. I said, “OK, dad. I’ll go in.’”

Over all, Avena remembers the time in the military as a “great experience.” But he and others faced emotional challenges.

“People don’t understand sometimes that when you go in, you’re alone and the only person that’s there with you is some guy screaming at you,” he said. “I’ve heard big, tough dudes crying for their mommies. They made it through. I graduated from basic and went through my schooling and then I came home and I was so relieved to come home. But it’s kind of a lonely life. All you have are your brothers.”