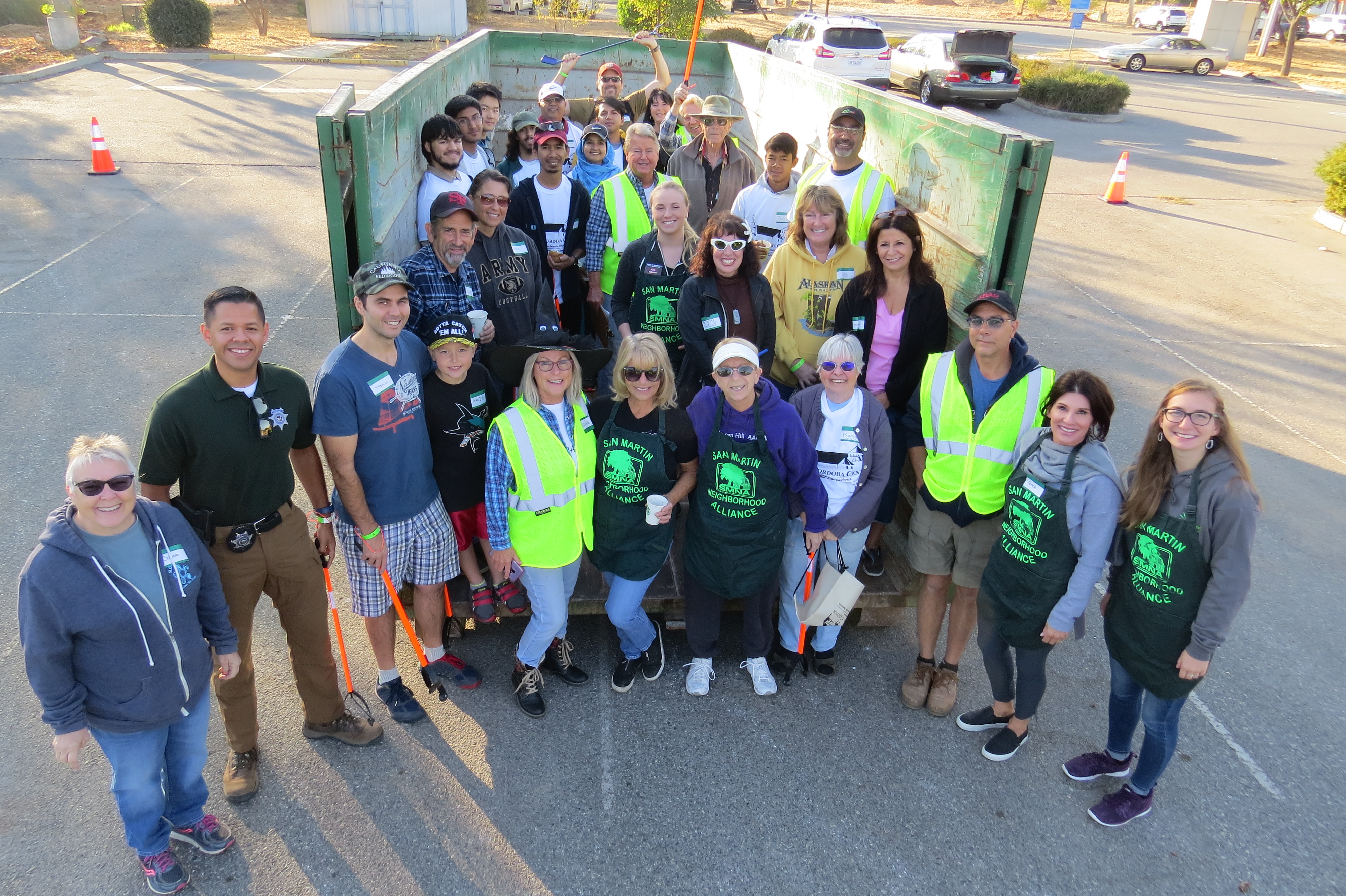 Volunteers pose for a photo before heading out to clear San Martin streets of trash.
Photo by Marty Cheek

South Valley residents who take pride in their environment joined together for a few hours on a fall Saturday morning to participate in the San Martin Trash Bash. They formed five teams and walked the roads picking up old bottles, paper wrappers and other litter Oct. 20.

Among the participants who started the event together with  coffee and pastries at the Sig Sanchez Government Center on Highland Avenue were about 40 individuals, including families with children, from Gilroy, Morgan Hill and San Martin. The South Valley Islamic Community had by far the largest contingent with 10 trash picker-upper volunteers including Faris Zulhazmi, 15, a Live Oak High School student.

“It was really cool, a good experience,” he said of the three hours picking up litter with his friends. “We went all the way to Sycamore (Avenue). We collected a lot but not as much as it was when I last went. It was mostly bottles and paper.” 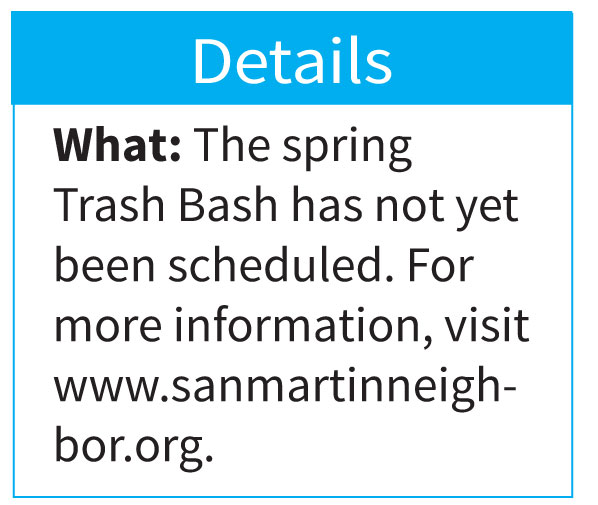 The volunteers braved the autumn heat that morning by drinking water they carried on them, said Saim Sheik, 16, a Sobrato High School junior who is also a member of the SVIC.

“We’re showing the community that we’re here to do good things,” he said. “There was a ton of cigarettes, a ton of alcohol bottles on the ground. It was fun because I went with my friends.”

Another teenager, George Hu, a junior at Sobrato High School, described his involvement in the San Martin Trash Bash as a way to protect the local environment. He encourages other young people to help out with litter patrol efforts.

“It was fun. It was a little warm but it was fun,” he said. “I was picking up garbage to make sure the plastic doesn’t get into the soil or into the creek. I guess it sort of helps future generations. It makes the environment better.”

The Trash Bash takes place in the fall and spring and is a collaborative effort by GreenWaste Recovery, Santa Clara County Supervisor Mike Wasserman’s office, the San Martin Chamber of Commerce, the San Martin Neighborhood Alliance, and the Santa Clara Valley Water District, which gives volunteers permission to enter creeks.

The volunteers are organized into teams who then are given yellow safety vests to wear and are sent to five sections of the community. Every team then moves through their respective territory picking up trash and putting them into bags. The volunteers head towards San Martin Avenue and Monterey Road where they all converge at the end of the three-hour period. They then return to the government center where they throw the trash into a 40-cubic yard dumpster provided by GreenWaste. At noon, the volunteers enjoy a pizza lunch and chat about what strange or unusual trash treasures they discovered in their morning’s search.

The teams are also encouraged to use Mobile Citizen, a smart phone app that the county uses that enables people to take a photo of a large trash item such as a couch or mattress or toxic waste or tires. The photo and location of the litter is then sent to the county’s Roads and Airports Department where the staff can pick it up the following Monday, said Trina Hineser, president of the SMNA.

“We love San Martin and we used to not have as much trash as you see today,” she said. “Whether it is caused by traffic or just lack of education, I’m not sure what the reason is why we have so much trash now. But we all see it wherever we go now.”

If residents of the South Valley don’t do their part and step up to pick up the trash regardless of where it comes from, then the litter is just going to increase, she said.

“Hopefully, the pickup of trash will breed upon itself, and we have more and more people come to help out,” she said.

At the end of the event, the organizers have fun asking each team what was the weirdest or the grossest item that they picked up during the Trash Bash so that they can reward them with prizes, Hineser said.

Kira Valenta, a policy aide at Wasserman’s office, described participating in the San Martin Trash Bash as an important activity for the county supervisor and his staff.

“It’s all about bringing the community together,” she said. “And we really do care a lot about our South County residents.”

Zoraya Atayde, a relationship manager at GreenWaste Recovery, helped ensure the dumpster was ready for the trash haul the morning of the event. She encourages companies and religious groups to participate as a “team-building event” for employees or worshipers to take action to protect the planet.

“What we really focus on is the environment,” she said. “We try to focus on making sure our communities are nice and clean…. We definitely want to make sure we keep all the garbage and plastics out of the environment, and not let it get into the storm drains to go down our creeks and into the oceans. It’s very important to do this to protect our marine life.”

For many of the volunteers from the South Valley Islamic Community, the San Martin Trash Bash serves as an opportunity to demonstrate their respect for God’s creation, said Karen Musa, president of SVIC.

“It’s part of our faith to do community work and be part of the community,” she said. “And so we are very involved in a lot of things.”

The week before the Trash Bash, the SVIC received the Gavilan College Spirit Award for its involvement in working on projects such as the litter pick-up activities, she said.

“We are a smallish group but we’re very involved to be part of our community,” Musa said. “This is God’s world and we have to be good shepherds of it.”