EDITOR’S NOTE: Through the California Department of Justice’s press office, we have offered Attorney General Xavier Becerra an opportunity to respond to this editorial with a guest column to be published in the next issues of Gilroy Life and Morgan Hill Life.

The letter of the law versus the spirit of the law. That’s now the question under consideration as action taken by California Attorney General Xavier Becerra puts at risk the continued operation of St. Louise Regional Hospital in Gilroy, the De Paul Medical Center in Morgan Hill, and O’Connor Hospital in San Jose.

As many of the more than 100,000 residents living here in the South Valley do, we are truly concerned about the potential closure of these local medical centers if a Los Angeles bankruptcy court confirms the California Department of Justice’s request to stop the sale by Santa Clara County of these three medical facilities from Verity Health System of California.

These facilities are presently in bankruptcy for the second time in four years. People in our southern area of Santa Clara County are heavily dependent on St. Louis and De Paul for essential medical services. After Verity filed for bankruptcy in August, there were no other bidders except the county. Supervisor Mike Wasserman and other leaders on the county board have assured voters that the county is committed to maintaining and growing the services offered to residents at the three facilities if the purchase goes through. And unlike a for-profit entity, the county is committed to serving people in need without consideration of their ability to pay.

Given that no other bidders have emerged, if the proposed sale continues to be blocked by the Department of Justice, the most likely outcome will be these facilities will be closed down all together. Should that happen, approximately 1,500 employees would lose their jobs and residents of Morgan Hill, Gilroy, and San Martin will be forced to travel many miles to receive hospital medical aid – even emergency medical services. The extended distance to drive could mean the deaths of many South Valley residents if precious seconds are crucial to the survival of a victim of an accident or other medical emergency. 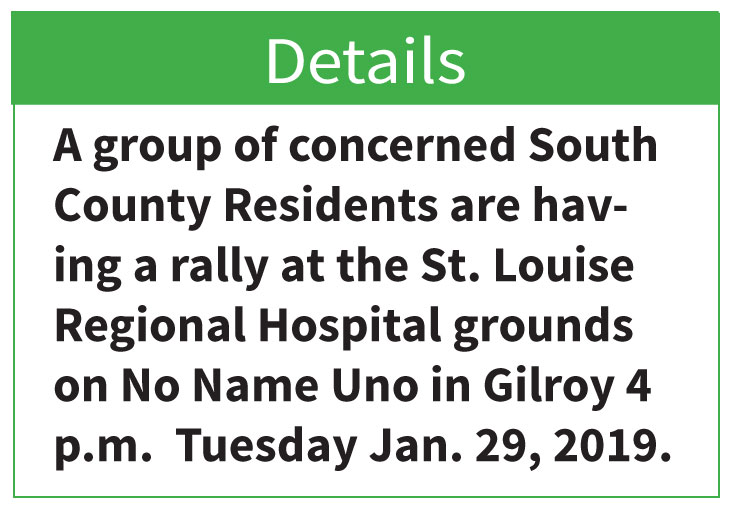 The closure of St. Louise and De Paul will especially be a hardship on people of limited financial means. Many will have to take much of the day off from work to travel by VTA bus to facilities in San Jose and elsewhere in the Silicon Valley. And the burden of an increased work load on the doctors and staff of these northern facilities will reduce the quality of care they can provide all patients.

If a catastrophe such as a major earthquake or gas-line explosion strikes the region, the lack of these three facilities to aid victims will mean a potential greater loss of life if they cannot receive the immediate medical care they need to survive. The closure of St. Louise and De Paul will harm all South Valley residents but especially the Latino community. That group sees a high rate of health problems and has a higher mortality rate from diseases such as cancer, heart disease and diabetes than the overall population in Santa Clara County, according to county health experts.

At a Jan. 24 press conference, Santa Clara County CEO Jeff Smith stood in front of a group of hospital workers, elected officials and South Valley residents holding signs with the hashtag, #SaveSCChospitalsAG. Smith told them Becerra cares more about maintaining “power and control” over regulations than making sure South Valley has a public hospital to take care of its residents’ medical needs.

“Attorney General Becerra has rejected all of our good-faith efforts to resolve his objections to the county purchasing the hospitals,” Smith, a medical doctor and lawyer, told members of the media attending the press conference. “It is clear the Department of Justice is more concerned about protecting its power than protecting the health of Santa Clara County residents.”

Unlike Smith, we trust that Becerra is not merely now going through a dance of political posturing for power. If he is, he won’t be winning friends here in the Bay Area. And he will be losing support if he runs for office in a future election and voters remember he lost the Silicon Valley three excellent medical facilities and cost many healthcare workers their jobs. Even the SEIU-United Healthcare Workers West, the union representing many of the hospital workers including nurses,  released a statement in support of the sale of St. Louise Regional Hospital and O’Connor Hospital to Santa Clara County because they believe “the county has made strong commitments to maintain services and protect workers, and we are hopeful that the attorney general’s appeal will not delay the transaction.”

The DOJ sent us a statement beginning: “The Attorney General is entrusted with the responsibility under the state constitution and statute to protect the health and safety of patients and the community served by hospitals.” If he truly seeks to uphold this responsibility, Becerra needs to place the spirit of the law (the intent to protect lives) above the letter of the law (the requirements of a legal document).

The DOJ needs to immediately pull out the monkey-wrench it threw into the machinery of the purchase by Santa Clara County. Putting thousands of people’s lives in jeopardy by closing three medical facilities just to uphold a legal point defies common sense. If Becerra does not understand that continuing to block the county’s purchase of St. Louise and De Paul puts the health and safety of South Valley residents at risk, we request he pay us a visit. Our residents will be glad to explain to him the crisis he caused.