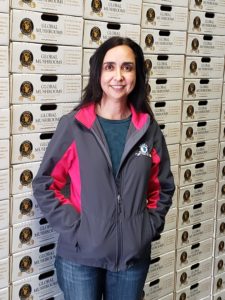 Local  resident Emily Bettencourt got a late Christmas present. U.S. Secretary of Agriculture Sonny Perdue appointed three members Dec. 27 to serve on the Mushroom Council — and she made the list.

Visitors to the annual Morgan Hill Mushroom Mardi Gras on Memorial Day weekends often chat with Bettencourt at the educational display inside the community center. They learn much from her about these locally-produced food products so delicious in pizza, salads and pastas.

Most people might believe with the Gilroy Garlic Festival’s world-wide fame that the odorous herb is the prominent crop of the South Valley. But with nearly $75 million in annual Santa Clara County sales, according to the 2017 Santa Clara County crop report, mushrooms dwarf garlic’s $6.5 million sales. Nursery crops are the No. 1 agricultural product in the county at $81 million, followed by mushrooms in second place.

Bettencourt believes serving on the National Mushroom Council’s board is important for South Valley because the prestigious position brings national attention to the mushroom industry here.

“I was very humbled and excited (to be appointed),” she said. “This is an excellent opportunity to use all of my years of experience working in the mushroom industry to promote our area and represent Global Mushrooms on a national level.”

California ranks second in the U.S. for mushroom production and Santa Clara County represents about 40 percent of those pounds, she said.

“The farms in Morgan Hill have a unique niche in the Bay Area market where many people are health conscious and love eating mushrooms. Several of the nation’s top media outlets have reported that mushrooms are the trending vegetable for 2019. I want these people to buy mushrooms from our Morgan Hill farms.”

The position on the Mushroom Council will keep her busy. The government group has a yearly budget of about $6 million that are assessments per pound paid by every mushroom grower across America, she said.

“I will be using all of the feedback I received over the years while talking to people at the Morgan Hill Mushroom Mardi Gras education display,” she said. “The council will be focusing on marketing to the consumer through blending media outreach with nutritional information, how to incorporate mushrooms into the school lunch program and through food service, such as the James Beard Foundation Burger Contest just to name a few things.”

Among its endeavors, the Mushroom Council played a role in having September declared National Mushroom Month in 1992. The origins of that recognition can be traced to the Mushroom Festival in Kennett Square, which is held the second week of September. The event promotes public and media outreach including social media and a website highlighting mushroom uses. Kennett Square markets itself as “The Mushroom Capital of the World,” a title that Morgan Hill has also used in the past.