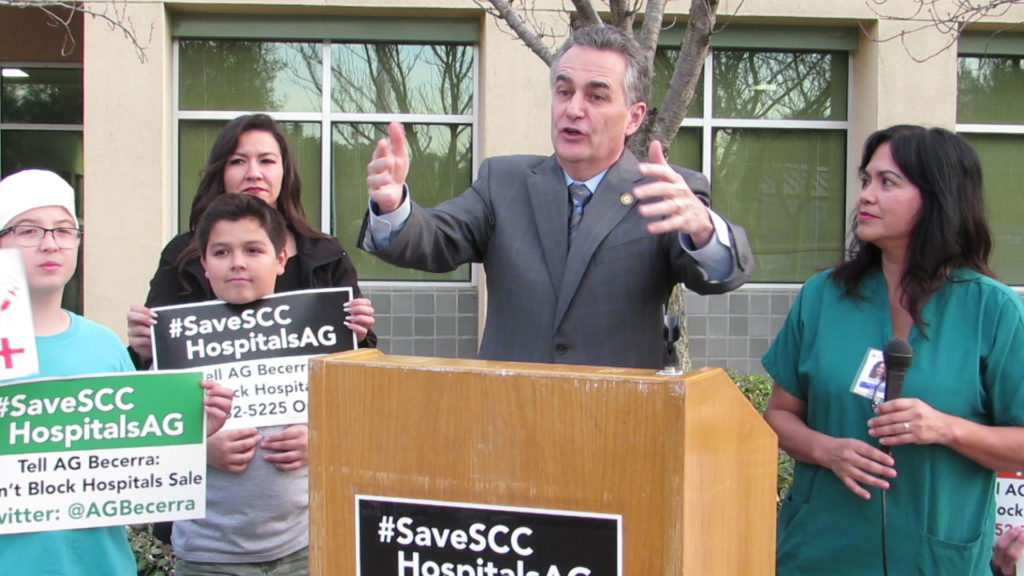 A federal bankruptcy court in Los Angeles ruled Jan. 30 against California Attorney General State Attorney General Xavier Becerra’s attempt to delay the sale of the Gilroy medical center, along with two others, to Santa Clara County.

The Department of Justice appealed that decision two days later, asking the U.S. District Court for an “emergency” stay. They argue the county has not agreed to the conditions set by Becerra’s predecessor, now-U.S. Sen. Kamala Harris, for a 2015 sale of the hospitals to Verity Health Systems of California. 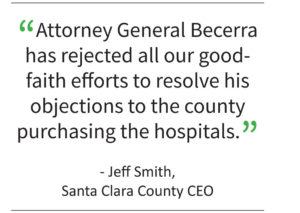 The agreement between the county and Verity requires the $235 million purchase of St. Louise in Gilroy, De Paul Medical Center in Morgan Hill and O’Connor Hospital in San Jose to close by March 1. Becerra’s appeal  might stop the purchase, shutting down the three facilities.

Judge Ernest Robles wrote in an 18-page ruling Becerra’s effort to temporarily block the sale “would set in motion a series of events that, in all probability, would reduce the availability of healthcare services to the public.”

The judged ruled the attorney general doesn’t have oversight authority when a nonprofit hospital is sold to a public entity such as a county government.

Becerra attempted to block the sale of the two financially struggling hospitals because he says the county has not agreed to operate them in a way that would protect healthcare access. County CEO Jeff Smith disputes this, saying the county is committed to maintaining the hospitals’ acute care capabilities as well as instituting charity care policies and community-based health programs for uninsured and underinsured patients. The county will  increase services, he said.

Holding signs and making speeches, about 60 South Valley residents and County Supervisor Mike Wasserman held a sunset rally in front of St. Louise’s Jan. 29 to express their concerns the Department of Justice’s attempt to postpone the county’s purchase of three medical facilities will risk lives and  cost the jobs of at least 1,500 employees.

“It is essential every resident of Santa Clara County have access to a hospital in the event of an emergency,” Wasserman said. “One thing you don’t want to be is in labor at 8 o’clock in the morning going north on Highway 101. Minutes can literally mean the difference between life and death.”

Although dozens of organizations inquired about purchasing the hospitals, only the county made a bid to Verity to buy the three facilities.

“Santa Clara County was and remains the only entity to step forward, make an offer based on the appraisal which was accepted by the bankruptcy court, and the sale was to go through,” Wasserman said. “The judge approved the sale. Unfortunately, the attorney general’s office objected. I say unfortunately because if the only bidder, Santa Clara County, is not able to complete the purchase in the next few weeks, these hospital will likely close. That will be absolutely horrific.”

The supervisor joined a group of South Valley residents who attended a Jan. 24 press conference in San Jose to protest what they saw as the AG’s interference in the deal between the county and nonprofit Verity Health.

At that event, Smith stood in front of a group of hospital workers, elected officials and South Valley residents holding signs with the hashtag, #SaveSCChospitalsAG. He told them Becerra cares more about maintaining “power and control” over regulations than making sure people have hospitals to take care of medical needs.

Becerra issued a statement Jan. 30 on the judge denying his petition. It is titled “Bankruptcy Should Not Be Used as a Means to Evade Responsibility for Care of Patients” and reads:

“Our message in court has been clear and simple. We take our responsibility to protect the health and safety of California patients and the Santa Clara community seriously. From ensuring access to emergency care to women’s healthcare, the important patient protections that apply to Verity’s health facilities must be maintained in any transfer of these hospitals. This decision unfortunately strips our office of the authority to protect patients when hospitals are transferred to public entities like the County of Santa Clara. This is concerning, since the County of Santa Clara would not articulate which of these important patient protections and services that were a condition for the operation of Verity’s hospitals would survive in the transfer of ownership. Nor would Santa Clara County explain why it would not commit to maintain these levels of patient protections and services.”

The county has done all it can to appease Becerra, Smith, a medical doctor and lawyer, told members of the media at the press conference.

“Attorney General Becerra has rejected all our good-faith efforts to resolve his objections to the county purchasing the hospitals,” he said.

In his decision, Robles said the public interest weighs strongly against Becerra’s request to postpone the sale. Because Verity lacks the funds to maintain operations pending a sale to another buyer, it would be forced to close.

“The Attorney General’s theory is that public health and welfare can be adequately protected only if he has the opportunity to enforce the Conditions,” the report read. “This argument overlooks the reality that enforcement of the Conditions would likely lead Santa Clara to withdraw from the sale . . . Far from protecting public health and welfare, a stay would set in motion a series of events that, in all probability, would reduce the availability of healthcare services to the public.”

The report also said a delay of the sale would harm employee morale by adding uncertainty into their lives. Verity filed for bankruptcy Aug. 31. Facing an uncertain  future, 104 employees left between Sept. 4 and Dec. 28.

Editor’s note: Please read our editorial about this story on page 2.