Woman escapes from life as a forced sex worker, wants to help educate others

Amanda met a man one spring day in a park when she was 15. About 10 years older than her, he acted friendly and asked her personal questions. Soon he told her he cared about her and wanted to be her boyfriend. His real intention, however, was sinister. 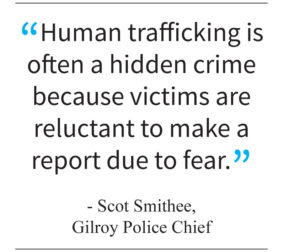 Over a couple of months, the teenager and the man became emotionally closer. She opened up to him about her history of sexual assault and molestation. She didn’t know until much later he was a pimp.

“He promised he would protect me and not let anyone hurt me again. And everything was good,” said Amanda (a pseudonym to protect her privacy).

The initial contact happened in May 2005 in a major East Coast city. In August of that year as the relationship grew, the man told her, “I love you. Do you love me?” She replied, “Of course, I love you.”

He told her he needed proof. “I need you to sleep with this person,” he said. “They’re going to pay me so I can cover some bills.”

Naïve about the ways of the world, Amanda reluctantly agreed.

“I have no life experience. I don’t know what’s normal and what’s not normal,” she said of that decision. “All I know is I have this man who swore he was going to protect me after I’ve already been assaulted. OK, I’m going to do what he wants. So for the rest of the summer, that’s what’s going on. At the end of the summer, I thought, I don’t want to do this. And I told him, ‘I don’t want to do this anymore.’”

The man threatened and hit her. He threatened violence against her family if she didn’t do what he told her to do.

For the next decade, Amanda worked the streets with other young women who had also been tricked into sex-trafficking. Clients included a range of ages and occupations from blue-collar workers and college students to politicians, professional athletes and even priests and pastors. Her middle-class family had no idea she was involved in self-trafficking. She told them about a fictitious job as a sales person for a company. She feared for their safety if she sought their help.

On Feb. 27, 2016, Amanda made a courageous decision — she would gain her freedom. Wanting to get away from the East Coast city she came to the Bay Area. Here, she got help from Community Solutions, a Gilroy-based nonprofit providing critical services including helping victims in human trafficking.

On occasion, the 29-year-old woman speaks to local organizations to increase awareness. As the third anniversary of her freedom approached, she spoke in a counseling room at the Community Solutions office in Gilroy. Her intention in sharing her story is to inform the public of this type of exploitation and encourage parents to protect children from becoming a victim. During the interview, Amanda was accompanied by Kimberly Gutierrez, human trafficking services program manager at Community Solutions, and Keri Gardner, the nonprofit’s communications manager. 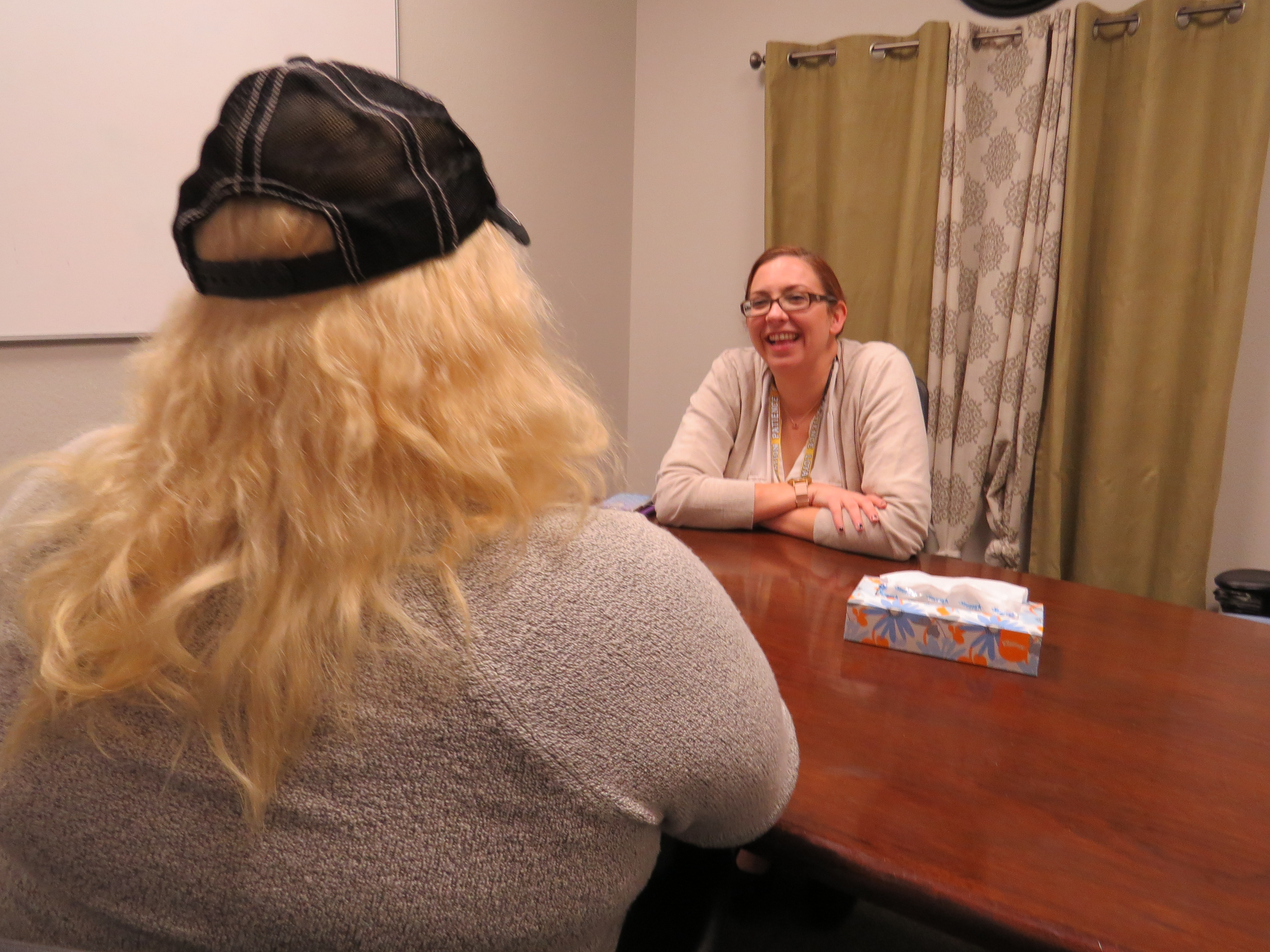 Defined by federal law, there are three types of human trafficking, Guiterrez said. Labor trafficking is when someone is forced to work without pay, usually through coercion. Domestic servitude involves child care where the victim is not paid or not able to leave. Sex trafficking involves the exchange of something of value for a sex act through force, fraud or coercion. Victims of human trafficking fit no specific profile and can come from all demographics or income levels. Although most victims are women, it is not uncommon for males to be trafficked as well.

“They have a right to a lot of different services that can support them,” Guiterrez said. “It does occur here in Santa Clara County. Actually, it occurs a lot more frequently than people would think. We have had a number of labor as well as sex trafficking cases. Some of those have involved minors as well.”

Since 2012, Guiterrez has worked with local youth survivors of sex trafficking. They find success emotionally and are thus able to redefine themselves as a person as they move forward with their lives, she said.

In a one-year period starting July 1, 2017, Community Solutions served 73 commercially sexually exploited children between the ages of 11-23.  For the previous year it also served 73 victims.

Morgan Hill Police Chief David Swing said the trafficking of people is one of the most under-recognized crimes.

“Human-trafficking affects documented and undocumented residents alike,” he said. “Through the Family Justice Center, the police department partners with Community Solutions, District Attorney’s Office and others to provide a one-stop location for those seeking help. We also conduct undercover operations and compliance checks at certain businesses to ensure the employees are not victims of human-trafficking.”

The challenge for survivors can also be trying to find financial stability. It’s difficult for many to enter the work force because they don’t have a job history. Community Solutions helps them find training and even education to help them gain their independence.

“We really do see a lot of the emotional impacts on the survivor, so we make sure they have the support to be able to work through whatever healing they’d like to be able to move forward,” Guiterrez said.

Three days before the interview, Amanda told her sister through texting about her life in sex trafficking. Her sister is the only one in her family who knows. Her sister’s supportive response surprised Amanda, which helps in the healing. She texted Amanda: “Live the future, not the past. It’s over and done with. What you do now matters. Going to church helps.”

“I didn’t think she would be so understanding,” she said of the message. “I thought she would maybe judge a little. Not that my family is judgmental. My family is actually a very caring family. I grew up with amazing parents.”

Amanda was conditioned by him to think if she told them, they wouldn’t want to be around her. Her mother still blames herself for Amanda’s being raped, which also makes it hard for her to tell her parents about the many years of sex trafficking.

“There was nothing they could do. So if she still carries guilt from that incident, I don’t want to know what knowing the whole truth will make them feel,” she said. “I don’t want to put either of my parents through that.”

In Santa Clara County, there are certain areas where clients drive. Monterey Road serves as a “track” going all the way through San Jose, Amanda said. There are spots on this thoroughfare in Gilroy, San Martin and Morgan Hill known for pick-ups. One sign women give is to “walk with their heads down and peek up every once in a while,” she said. Making eye contact with a client can be another signal. Women might get beat up by their pimp if he catches them walking with their head up, she said.

“There are a lot of boys. They just don’t talk. They’re less likely to talk than a girl is,” she said.

The danger can be life-threatening. A male friend of Amanda’s was killed by a “dominant” client choking him. “There was evidence, skin under his fingernails, to prove it was intentional,” she said.

It can be a difficult topic for families, but parents need to let their children know that it is a real threat, she said.

Children should be warned to be careful of strangers, especially those who ask them to do something they are not comfortable doing. Low self-esteem and lack of self-confidence can be characteristics a pimp might seek in a victim.

But parents can only educate their children so far. More middle and high schools also need to start implementing programs where sex-trafficking survivors talk about the “tough stuff,” Amanda said.

“I honestly think what would help teenage boys and girls, and even kids from the age of 10,” Amanda said. “Unless you’ve lived that life, you’re not going to know the warning signs you need to look out for. If someone had come into my school when I was 12, 13 years old, that would probably have stopped me from getting into the situation I got stuck in.”

Escaping from a life of sex-trafficking takes tremendous courage for those who decide to leave, Amanda said. When she made her decision, she discovered she wasn’t alone. She went to a community college but left because it “didn’t work out.” Her English instructor, however, encouraged her to write a book about her experience and promised he’d help her get it published. Amanda now works at a rental business in San Jose. The job is helping her gain financial freedom. More importantly, it builds self-respect.

“I just moved into my first apartment, and that was with Community Solutions and YMCA helping me,” she said. “Gaining my independence, it’s scary. But it’s nice at the same time.”