Music celebrates the coming of spring with high schools’ choirs 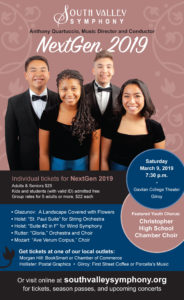 The South Valley Symphony will celebrate the season of spring and the promise of young people at its NextGen 2019 concert held March 9 at the Gavilan College Theater in Gilroy.

Students from Christopher High School in Gilroy and Sobrato High School in Morgan Hill will perform in a choir with the orchestra on several pieces, said Anthony Quartuccio, the symphony’s music director and conductor. The theme of the concert will be “spring” as part of the Symphony for All Seasons series.

“We’re firing on all cylinders for the concert,” he said. “ We’re looking at rebirth and the whole cycle of life through great music.”

“This is a fantastic, large-scale orchestral piece. It’s very modern British and very accessible,” he said. “It’s not often done. In fact, I’ve never heard of a high school performing this piece, it’s such a block-buster. So we decided to collaborate. We’re really looking forward to it.”

In the rehearsals with the orchestra musicians in recent weeks, the young singers have been truly showing their performing talent, Quartuccio said.

“I’ve rarely ever heard a high school chorus that can sing with such finesse and elegance and professional style,” he said.

One thing South Valley Symphony wanted to do with this concert is feature a composer to encompass young people in two different pieces. They found Gustav Holst — famous for his symphony “The Planets” — filled that role. The SVS will perform Holst’s “Suite #2 in F for Wind Symphony,” a military piece that will be performed with members of the concert band from Sobrato High School, led by music teacher Greg Chambers.

“(Suite #2) is a really fantastic piece. It has marching music, it has really fast playful music with it, too. It’s a colorful piece,” Quartuccio said.

The symphony will also perform Holst’s “St. Paul Suite for String Orchestra.” The composition was commissioned for singers at an all-girl private school in Great Britain that had a string orchestra

“We’re going to feature our string ensemble, which we have been bolstering with some new members recently. We’re really thrilled,” Quartuccio said.  “The thread of all of this stuff is youth, all the way through the concert.”

To celebrate the coming of warm weather in spring, the orchestra will perform Glazunov’s ballet piece “A Landscape Covered with Flowers.” It will also perform with the student choirs Mozart’s “Ave Verum Corpus,” a moving hymn the famous composer wrote in 1791 to celebrate the feast of Corpus Christi.

“When you hear them sing Mozart, you’re going to be really excited,” Quartuccio said. “It’s something Mozart wrote when he was very young as well. It’s multi-generational supporting the idea of being reborn with music.”

The annual NextGen concert usually features a solo by the winner of the Al Navaroli Youth Competition. Last year’s winner, violinist Mai Matsumoto, performed to a standing ovation from the audience. She is now finishing her first year at the Julliard School in New York City. The symphony decided this year to put the competition on a one-year hold until 2020 in order to restructure it to encompass more young people from the South Valley area into it.

The symphony is expecting a full house for the NextGen concert so Quartuccio recommended purchasing tickets as early as possible. It will serve as a good introduction for children because of the lively pieces, he said.

“We try not to over-stuff the program with music,” he said. “We have it just at the right amount of time without having young people get antsy.”