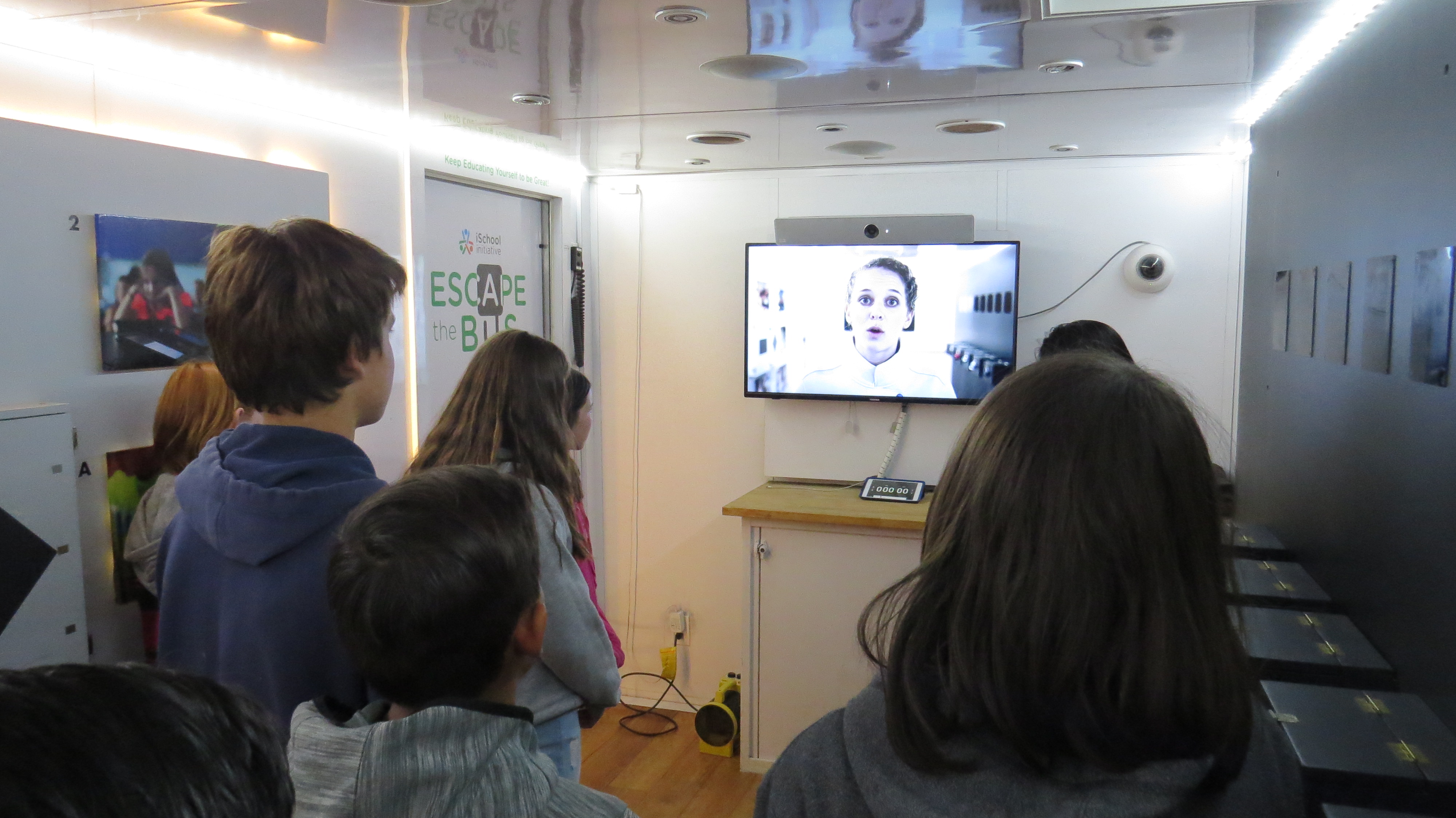 Ascencion Solorsano Middle School students listen to the video instructing them on their mission in an attempt to “Escape the Bus.”
Photo by Marty Cheek

Students of Gilroy’s Ascencion Solorsano Middle School faced a brain-strain challenge Feb. 11. In teams of 12 students and two or three teachers, they put their minds together to find the secret code to “escape” a “bus” within 30 minutes and save the universe.

Throughout that week, representatives from the iSchool Initiative spent the day with the “Escape the Bus” — really an Airstream Limited RV — on various campuses of the Gilroy Unified School District. They used the experience to help students tackle solving a series of puzzles to get off the vehicle. iSchool sees a need in today’s education system to reinvent learning to make it more interactive for students. 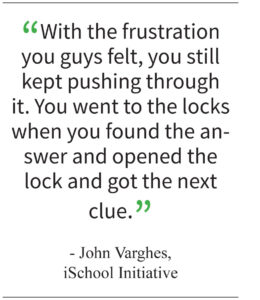 After a group of Solorsano sixth and seventh graders entered the bus, the door was closed and they were given instructions by iSchool’s John Varghes who coordinated that day’s activities. He told them the most important rule is “there are no rules.” He also told them to avoid certain cabinets because all they contained were cleaning supplies, not clues. If the students needed one of three life-line hints while searching for the escape code, they could form a circle, put their hands together at the center, and shout: “One, two, three, hint!”

When Varghes made sure the students understood the directions, he showed them a one-minute video:

A woman wearing futuristic clothes came on the screen. She told the students she had used time machine technology to travel into the past to ask them to save a student at the school. That student would go on to colonize Mars, find a cure for cancer, and eventually establish universal peace.

“Something happened in the past,” she said. “All we know is the educational system has been changed to focus purely on memorization and testing. This has caused this student to drop out of school utterly bored and defeated in the classroom. And right now all hope is lost. What we need for you to do is to learn the tools this student needs to rediscover the secrets of learning. Hopefully, if you do this, this student will be re-inspired to learn the essential keys to be great and successful.”

The screen turned into a 30-minute countdown clock The students and two teachers began searching the bus for clues. At first, it was chaotic as they looked at various exhibits with strange instructions and a 3D printer. They examined boxes on one wall that needed a number sequence or key for a padlock to open.  Intense music played to make the adventure feel like a movie.

The idea for “Escape the Bus” was dreamed up by Travis Allen to promote technology and culture within the learning environment. While a student in high school, he created a viral YouTube video on revolutionizing America’s education through the use of mobile technology. In college, he started iSchool Initiative to use technology to make learning a more enriching experience.

Above: Students try to find the code to solve the puzzle to escape the bus. Left: Tyson Shaw, 6th grader, attempts to enter a combination into a lock to get the next clue. Photos by Marty Cheek

With a minute or so left on the clock, Varghes told the students and teachers: “You’re 85 percent of the way there.”

They rushed to figure out the final code to let them escape. (This story will keep it a secret to preserve the fun for other students.) Everyone started shouting as the seconds ticked by. The clock buzzer started. Five seconds later, one student shouted out the final code. Another entered it into the “command console” computer, letting them “escape.” At 30 minutes and five second, the group had by far the best showing of any session at Solorsano that day.

At a wrap-up talk, Varghes discussed what the students had learned from their experience. Much of their success came from willing to take risks and see objects in new ways to uncover the clues. Teamwork and communication with each other were also vital.

“There were certain people who at points started panicking. There was frustration involved,” Varghes said. “With the frustration you felt, you kept pushing through. You went to the locks when you found the answer and got the next clue. How did that make you feel?”

“Because we got closer to the answer,” he said.

Varghes asked the students to pick a team name. The group picked “Team Let It Go.” The reason: during the half-hour time period they were searching for clues on the bus, they discovered they had to sing out loud the song “Let It Go” from the Disney film “Frozen” to make a digital information board light up and read information on it. 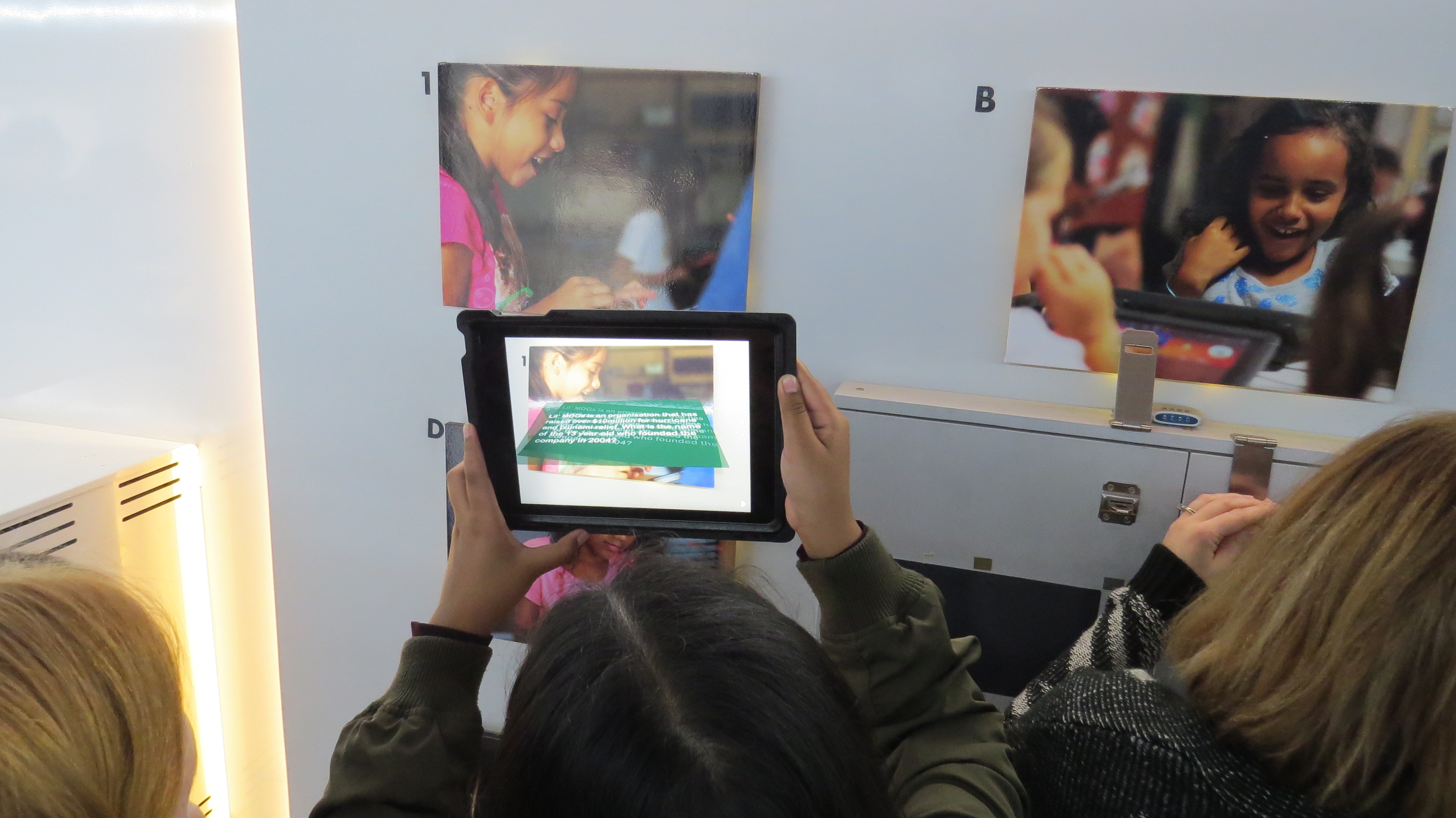 Above: Students try to find the code to solve the puzzle to escape the bus. Left: Tyson Shaw, 6th grader, attempts to enter a combination into a lock to get the next clue. Photos by Marty Cheek