Guest column by Karen Musa: South Valley Muslim community gathers with others to remember those slain

On March 15, our small Muslim community here in the South Valley had our regular weekly Friday congregational prayer. However, beyond the time, format, and the fact that our Imam Ilyas was leading the service, there was nothing usual with respect to the mood of the congregation or the guests we had in attendance.

For that day, in addition to our regular worshipers, we were also joined — quite spontaneously — by our neighbors as well as leaders and members of the other faiths in our local community. They came to our modest masjid to show support and express their condolences to us. They too, like us, had heard of the earlier tragic event occurring on the other side of the world across the Pacific.

At a comparable local time and day in Christchurch, New Zealand, there had been a barbaric attack on a mosque perpetrated by an obscenely well-armed white supremacist.

It was not too long ago that our community had a similar gathering at our local Emeth Congregation, also to express our condolences following the attack on a synagogue in Pittsburgh.

In his khutbah (sermon) last Friday, Imam Ilyas related how that very morning a member of our congregation had phoned him to inquire whether it would be safe to attend that Friday prayer session. That such a question was even posed spoke volumes. We were heartened, however, that the attendance by our regular members that day was not affected. The terrorist did not win on that one. 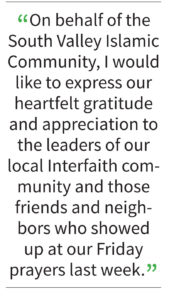 Imam Ilyas led us in prayers for the victims and their families, and our collective call to All-Mighty God to lighten their terrible load. At the end of the service, Rabbi Debbie Israel briefly addressed our congregation. She, too, noted that following the Pittsburg attack, a member of her congregation had expressed a similar concern about attending services at their place of worship.

It is becoming a sad reality for far too many and in too many places that members of a community do not or cannot feel safe in their houses of worship. Society cannot let the sanctity and spirituality of our places of worship be violated

It is during such times of grief that we look to our leaders not only for guidance but also assurance. In this regard, New Zealand’s Prime Minister Jacinda Ardern’s immediate reactions were a soothing balm on her citizens, as well as that of the world beyond.

Prime Minister Ardern’s immediate and effective response has raised the standard of public and national governance in times of crises. Her sterling example is more keenly felt where such manifestations of enlightened leadership have not been demonstrated or are glaringly absent.

On behalf of the South County Islamic Community, I would like to express our heartfelt gratitude and appreciation to the leaders of our local interfaith community and those friends and neighbors who showed up at our Friday prayers last week. They gave us strength and hope. I also would like to thank those who had expressed their support through social media.

Karen Musa is the president of the South Valley Islamic Community. She wrote this column for Morgan Hill Life.