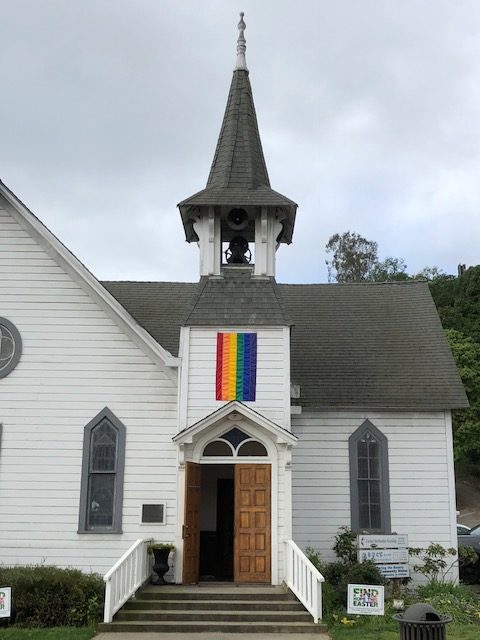 The Morgan Hill United Methodist Church has displayed a rainbow flag to support more than 1,000 other Reconciling United Methodist Churches in response to the Special General Conference’s decision to follow a traditional plan that the congregation believes supports the continued discrimination of the LGBTQAI community.
Photo by Robert Airoldi

The leadership team at the Morgan Hill United Methodist Church recently voted to place a rainbow flag on the bell tower over the main entrance of our church. This was a courageous act on the part of the administrative board for our church. They voted to display the rainbow flag with more than 1,000 other Reconciling United Methodist Churches that have chosen the slogan: “Stand Your Holy Ground.”

This stance of solidarity was in response to the Special General Conference’s destructive and divisive decision to follow a Traditional Plan that supports the continued discrimination and exclusion of our LGBTQAI sisters and brothers to have full inclusion in the United Methodist Church.

United Methodist Churches are using The rainbow flag as a symbol to make a statement of hope and radical hospitality to our LGBTQAI community. The colorful rainbow celebrates the diversity of this community. Its display in public spaces is a welcome sign for everyone. In parades and protests it invites people to stand in solidarity with a community that continues to experience discrimination in society, even in our United Methodist Church.

The flag means so much more and goes far beyond just gay pride. The flag was born out of a need to celebrate for all human beings the right to exist without persecution, regardless of our differences.

The flag also represents a community’s resolve and perseverance for having not only survived, but thrived in a world which has often been a hostile place.

The rainbow flag also symbolizes the inclusion of all God’s children in our churches. Its colors signify that every person of every nationality, race, age, creed, class, abilities, gender, sexual orientation, and gender identities have a place at God’s Table. The rainbow flag reminds us that no one is excluded, no one can be separated from the love of God.

It is pride in being who we are, it is pride in standing up for what we believe in. And that makes it also a symbol of hope. We know that things are not perfect, but the progress we are making is extraordinary. And the rainbow, just as it was for Noah a sign of hope and renewal after the Great Flood, affirms our hope for an even better future.

After the 2019 General Conference, rainbow colors were draped on our altars and displayed in our churches. Many have been doing this for a long time since they became Reconciling churches.

As we give birth to a new Methodist movement, let us visibly show our resolve to stand with those who are discriminated in our denomination. Now, without any equivocation, is the time to show our true colors: one of love and celebration of the divine worth of every person. Now, more than ever, is the time to proudly fly the rainbow flag.

Pastor Patrick Davis has led the Morgan Hill United Methodist Church since 2010. He wrote this for Morgan Hill Life.