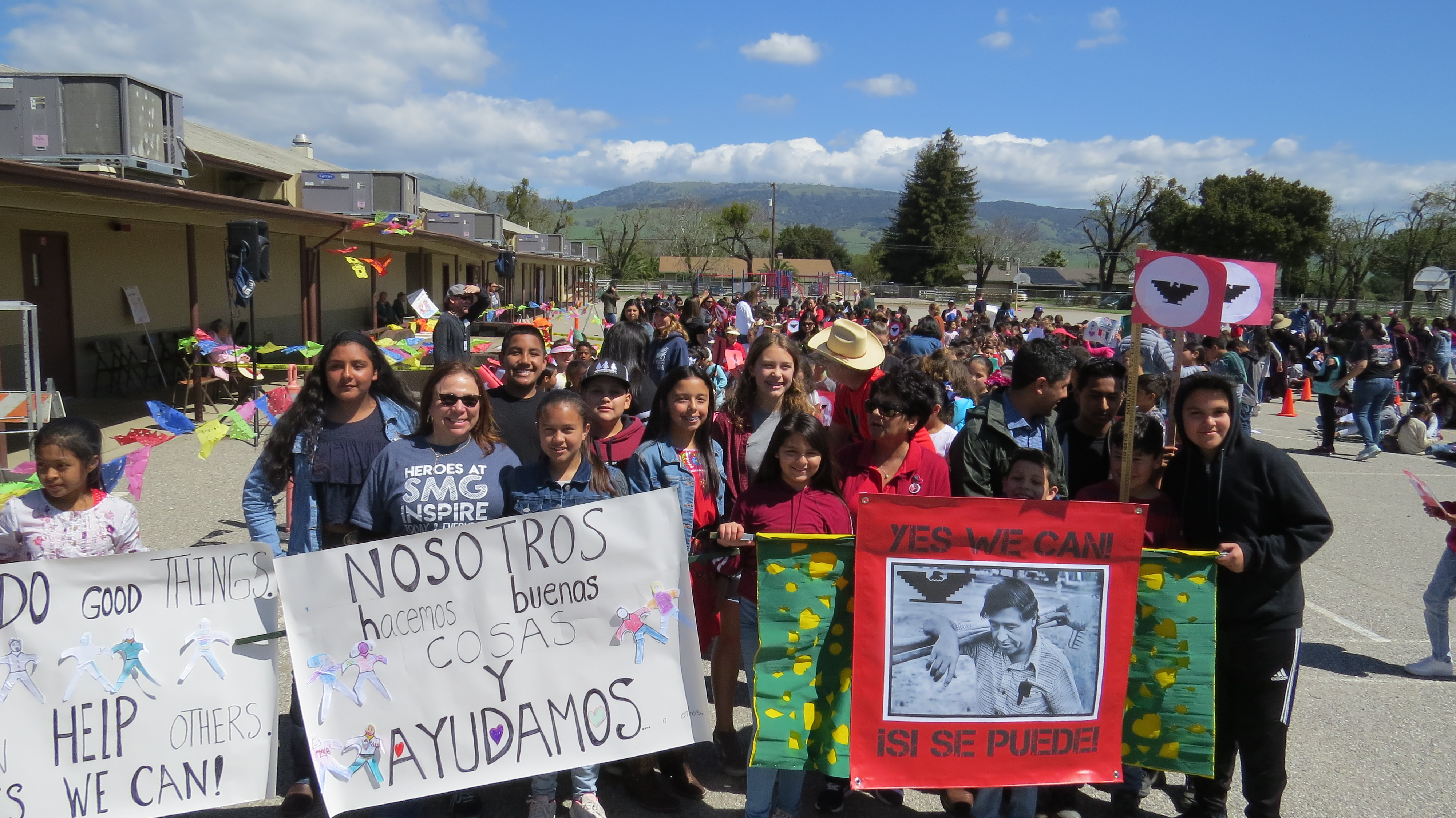 The legacy of Cesar Chavez was honored at San Martin/Gwinn Environmental Science Academy March 29 with an afternoon assembly featuring relatives of the labor leader and civil rights activist.

Born March 31, 1927 and died April 23, 1993, Chavez and his friend Dolores Huerta co-founded the National Farm Workers Association union in 1962. The name was later changed to the United Farm Workers of America.

At San Martin Gwinn, about 700 students gathered on the playground for an assembly featuring the theme of justice for farmworkers.

The students held flags with an eagle silhouetted on a red background, the symbol of the UFW. On the bed of an old farm truck, a musician sang songs from the period, followed by speakers who addressed the elementary school children about Chavez’s legacy and why it’s important to continue to strive for social justice. Among them was Cesar Chavez’s daughter, Sylvia Delgado, and his grandson, Anthony Chavez.

“This actually reminds me of some of the pictures that I use to see when I was looking at my grandparents photo albums, or looking at old news clippings,” he told the students. “When the farm workers movement started, they didn’t have a lot of attention, or a lot of power, or sometimes a lot of money.”

At union rallies on the side of farm fields in the 1960s and 1970s, the striking workers and organizers would stand on truck beds similar to the one at the assembly, he said.

“One of the things that they always used to do — whether my grandfather or Dolores Huerta or Larry Itliong or Philip Veracruz — is that they would start every rally with a unity clap — or with a farmworkers clap. How many of you know what that is? How many want to learn?”

Anthony started a slow rhythmic clap and the kids joined in. The clap grew faster in pace.

Anthony told the students an important aspect to think about when recalling the farmworkers movement that their work continues today. It’s about making sure people live every day with that spirit of Sí, se puede he said.

The students could learn lessons from the farmworkers, he said.

“Those basic lessons were things like respect and dignity,” he said. “My grandfather used to say, ‘It’s not about the lettuce or the grapes. It’s about the people. It’s about ensuring that we respect the hard working parents and families and sometimes children  who were out there doing work to feed us and our families.”

Another lesson Anthony gave the San Martin Gwinn students was the importance of using non-violence in working toward social justice.

“Often times when the farmworkers and their supporters were trying to organize to make their lives better, they were being confronted by bullies and by bigots and people were just nasty and racists,” he said. “And they used to say mean things to them, and sometimes they would just attack them and they would kill people who were protesting non-violently. So we have to remember that when we go out and want to be of service to others, we have to do it non-violently. That’s the only way we can bring about making lasting change.”