Play will take the audience back to a simpler time 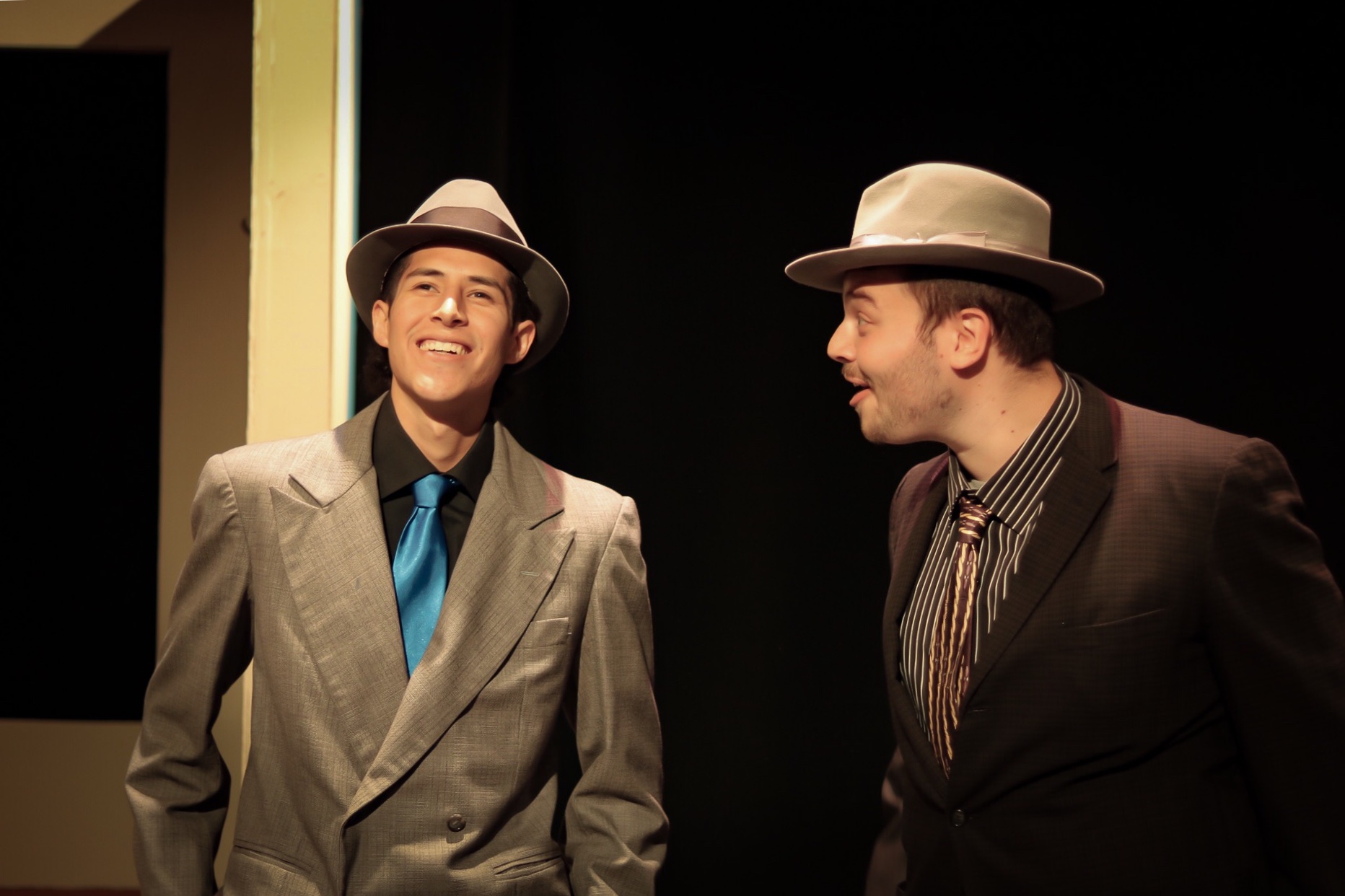 New York City comes to the South Valley starting May 3 when Gavilan College invites musical theater fans to take a trip to 1950s Broadway in the romantic-comedy hit “Guys and Dolls.” 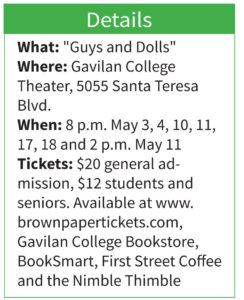 At the same time the slickest high rollers in town try to score a secret location for their floating craps game, Salvation Army preacher Sarah Brown finds her mission is running short on sinners. Meanwhile a conman named Sky Masterson accepts a bet that he can’t seduce Sarah, and a mischievous showgirl Miss Adelaide continues her 14-year dream to get her boyfriend Nathan to marry her. These humorous obstacles make up the story of “Guys and Dolls,” a “musical fable of Broadway” directed by John Lawton Haehl, (with musical direction by Dana Parker and vocal direction by Brian Carmack).

Gavilan graduate Anthony Gutierrez plays the role of Sky Masterson, a gambler who is famous in the Big Apple for his extreme willingness to place a bet on virtually anything. He must woo an uptight religious missionary and take her for a night of partying in Havana, Cuba, to win a $1,000 bet.

Before transferring to San Jose State University, Gutierrez performed in the Shakespearean comedy “A Midsummers Night’s Dream” at Gavilan in 2018. From the first day of the acting workshop he was hooked.

“Gavilan’s theater program always delivers great productions. I think playing the role of Sky Masterson is an opportunity for me to show the audience how cool, calm and collective the gambler really is,” he said. “Sky is the smoothest guy on the planet. As director Dr. John says, ‘Sky is never in a hurry.’ I feel like I can relate to that. I try to carry myself in the same manner, I try to align myself to the rhythm of life, and I just let everything come to me.

At his core, the actor considers himself a betting man, so that helps him relate to the role. 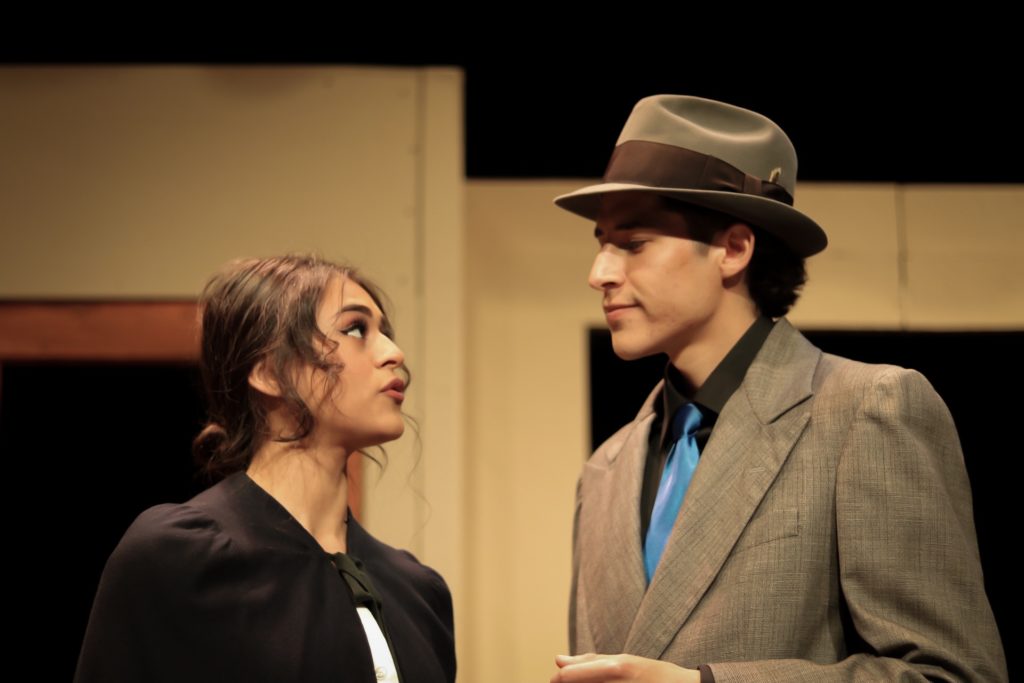 “The question ‘How much do you want to bet?’ frequently comes out of my mouth when I’m around family and friends,” he said. “Although, I will admit, I don’t bet as high as Sky does.”

Gavilan theater major Samantha Cardoza play the songbird Sarah Brown, whose romantic love for the devilish Sky she describes as “genuine” despite the fact that they are complete opposites in personality. 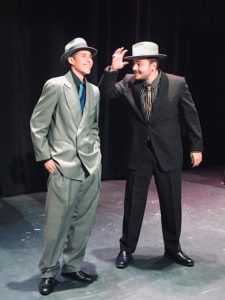 “At first Sarah wants nothing to do with him,” she said. “However, she slowly but surely gives into him. While simultaneously falling in love for the first time, they become vulnerable and show sides of each other that no one else sees. They feel like their genuine selves together. It’s sweet to see these two characters realize their feelings for each other.”

Cardoza describes her character as a straight-laced Salvation Army mission sergeant who is a kind soul full of hopes and ambitions. Sarah grew up very sheltered but the audience discovers she has an adventurous and romantic side.

“It’s been fun exploring both sides of her, when she shows her strength versus when we get to see her vulnerable side,” she said. “She’s passionate in everything she does — that’s something that she and I have in common.”

A hit musical when it premiered in 1950, “Guys and Dolls” features music and lyrics by Frank Loesser and book by Jo Swerling and Abe Burrows. It is based on the short stories “The Idyll of Miss Sarah Brown” and “Blood Pressure,” written by Damon Runyon. It and also borrows characters and plot elements from other Runyon stories.

“This version of Guys and Dolls will be magical,” Gutierrez promised. “The uniqueness of the cast plus the expertise of Dr. John Lawton Haehl, Dana Parker and Brian Carmack will create fireworks.” 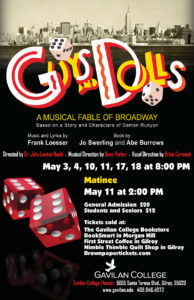 For Lawton Haehl, the show is one of his favorites because of the songs that will have audiences humming after the curtain call. The Gavilan version has performers ranging from age 16 to older than 60. To update it for a 21st century audience, he decided to change some of the male roles to female.

“It’s a beautiful show that was written in the 1950s, but when we look at it with a 2020 pair of glasses, well, how do we say this nicely?” he said. “It’s a little dated and maybe a little sexist the way the show is structured. My goal is to try to change that up. So I did a couple of things to that end. I’ve done some what I call gender-blind casting.”

Cardoza shows off a dynamic talent in portraying her character, he said.

“Sammy is a sort of triple-threat. She can sing. She can dance. She can act,” Lawton Haehl said. “And I always try to think of shows for my season to find vehicles that will give good roles to some of my (theater) majors. And I thought Sarah was kind of a good role for Sammy to try.”

Part of the charm of the show is the nostalgia aspect, he said. It takes the audience back to a simpler time based on the quirky power of Runyan’s short  stories. The show starts with a pantomime of New Yorkers and tourists mixing through Times Square to get the audience back in time.

Audiences who come to Gavilan College Theater to see “Guys and Dolls” will experience an upbeat romance filled with well-loved songs including “Luck Be a Lady Tonight,” “Sit Down, You’re Rocking the Boat,” and “A Bushel and a Peck.” They’ll be charmed watching the characters struggle to find romance as they undergo their obstacles, Lawton Haehl said.

“We see Sky Masterson transform from smooth, slick gangster to a guy whose first name is Obadiah Masterson,” he said. “That’s the joke. Our take on Sky is that he came from a religious background. He came from a religious family. That’s why he has that name Obadiah. Over the years, he developed the smooth, slick persona of Sky Masterson. But Sarah, of course, sees through that and wants to be with him and that’s the redeeming thing at the end.”