Sidebar – LBD symptoms can be frustrating, leading to aggression and paranoia

LBD is a complex disease that is progressively debilitating

Unlike Alzheimer’s, in which patients gradually forget memories, names, and events, Lewy body dementia (LBD) can be cruel. While Alzheimer’s patients forget something and never remember it again, LBD patients are aware that they’re forgetting things, and sometimes recall them later. This leads to frustration, which can manifest as aggression, paranoia, and other unusual behaviors that can be startlingly different from the patient’s inherent personality.

An especially troublesome aspect of LBD is Sundowner’s Syndrome, which can be prevalent in Alzheimer’s patients as well.

It commonly occurs in the evening, hence the name. During this time, an LBD patient can become highly agitated, fearful, paranoid, delusional, and aggressive. Behavior can change in an instant, causing high distress for the patient as well as family members and caregivers.

No one knows what causes LBD. Research on the condition is ongoing. It’s likely that there are multiple factors, including genetics, environmental risks, and the natural aging process. 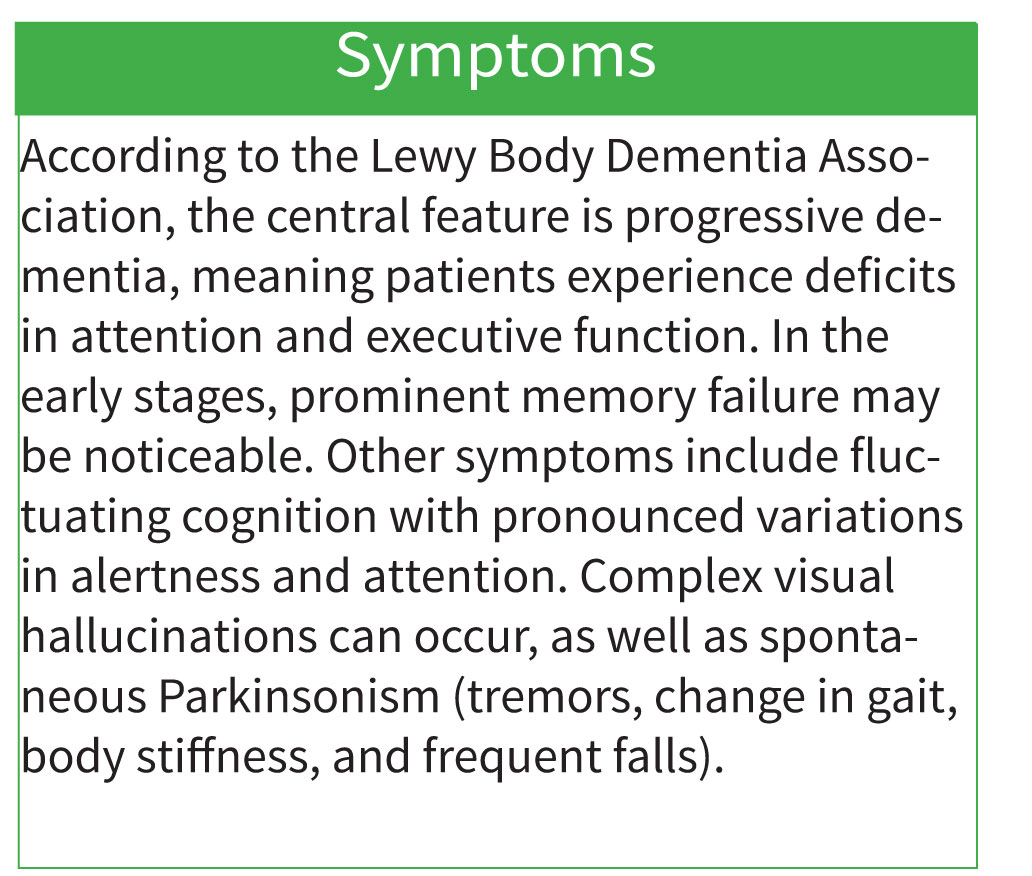 According to the Lewy Body Dementia Association, “Dementia is a process whereby the person becomes progressively confused. The earliest signs are usually memory problems, changes in their way of speaking, such as forgetting words, and personality problems. Cognitive symptoms of dementia include poor problem solving, difficulty with learning new skills, and impaired decision making.”

Furthermore, LBD is a complex disease that can affect alertness, cause problems with movement including tremors, stiffness, slowness and difficulty walking, bring on hallucinations, and alter sleep and behavior.

Progressively debilitating, it can present with issues affecting blood pressure control, temperature regulation, and bladder and bowel function. LBD can also cause people to experience visual hallucinations or act out their dreams.

With such a wide range of symptoms and behaviors, LBD can be overwhelming to treat. A solid, unified team of caregivers is a necessity.