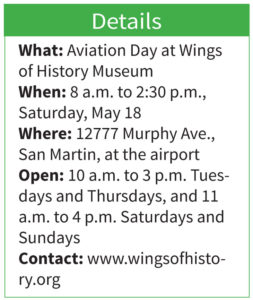 Art can bring healing and relief to those who have experienced trauma. It can also enable  people to better understand someone else’s experiences. With that in mind, the Gilroy Center for the Arts opened a new exhibit, “The Art of War, A Veterans Art Exhibit” on April 27. Featuring the work of about a dozen veterans, the exhibit runs through May 25.

“The people who inspired this exhibit were my father, Bob Clark, who fought in Vietnam, and both of my grandfathers,” said Rachel Perry, a GCA board member who is producing the exhibit. “My dad has always been tinkering. As a kid, I watched him make jewelry and later, knives. He doesn’t talk about his military service, but he’s involved with his local VFW (in Hollister). I figured he wasn’t the only veteran out there doing creative things to keep himself busy.”

And she was right. She reached out to local VFWs and American Legion posts, and several veterans answered the call.

Joe Kline, of Gilroy, is one of the artists whose work will be displayed in the exhibit. A Vietnam veteran, Kline creates aviation art.

“I always had a talent for drawing,” he said. “I spent two years in college, then went into the Army. When I came home from Vietnam, I started painting. I was interested in aviation art because of my father,” who was a B-25 bombardier with the 340th Bomb Group in the Mediterranean Theater during World War II. Kline served as a Huey helicopter crew chief with the U.S. Army’s 101st Airborne Division.

But besides the family connection, Kline recognized how deeply personal his military art can be. Originally, he began doing one-off pieces for veterans, usually commissioned by a family member. Then he realized he could do limited edition prints and customize them.

“People don’t always have an appreciation for how attached a veteran becomes to their aircraft,” he said. “Some might have old, grainy black and white photos, but some have nothing. It’s really touching to these guys, their family members, and me, to see how these prints affect them.”

Kline personalizes his work with the nose art, tail number, and squadron paint, and other distinctive markings, so that recipients can preserve their memories.

“It’s put me in touch, in the last 25 plus years, with literally thousands of Vietnam veterans, mostly air crew,” he said. “It’s been a very rewarding experience. Then after Iraq and Afghanistan, I started getting requests from those guys. There are better artists than me. But what gives me ‘street cred’ is that I lived that stuff.”

For many vets, creating art is an opportunity to channel their trauma into productive energy. It’s common for those returning to struggle to come to grips with post-war life as they rejoin the civilian sector. So many veterans fall into destructive behaviors.

In fact, it’s estimated that 22 American veterans take their lives each day. And many believe that number is significantly higher. Creating art could provide an effective form of therapy for those who are at risk and processing strong, and often painful, emotions.

“My maternal grandfather is a World War II veteran,” Perry said. “He was always doing something, like woodworking. As I’ve gotten more involved in the art community, I’ve met more veterans who keep themselves busy, whether they’re building something, painting, making lithographs, or something else.”

Perry estimates there will be 20 to 30 pieces in the exhibit, each one as unique as the vet who took time to create it. In addition to her father’s knives, the exhibit will include paintings, jewelry, metal work, wooden pieces, lithographs, and more. She also plans to include information on artists who have served in the military, as well as uniforms and other displays.

The exhibit is sponsored by Operation Freedom Paws, which empowers veterans, as well as individuals with disabilities, by teaching them how to train their own service dogs, creating a human-canine team. DreamPower Horsemanship will also be at the reception to highlight their Horses for Warriors program. DreamPower offers equine-assisted activities such as psychotherapy, learning, and therapeutic horsemanship.

They’ll be on hand to give a brief overview of their program, and some of its participants will be there to answer questions.

“I wanted to give local veterans an opportunity to share what they do,” Perry said.