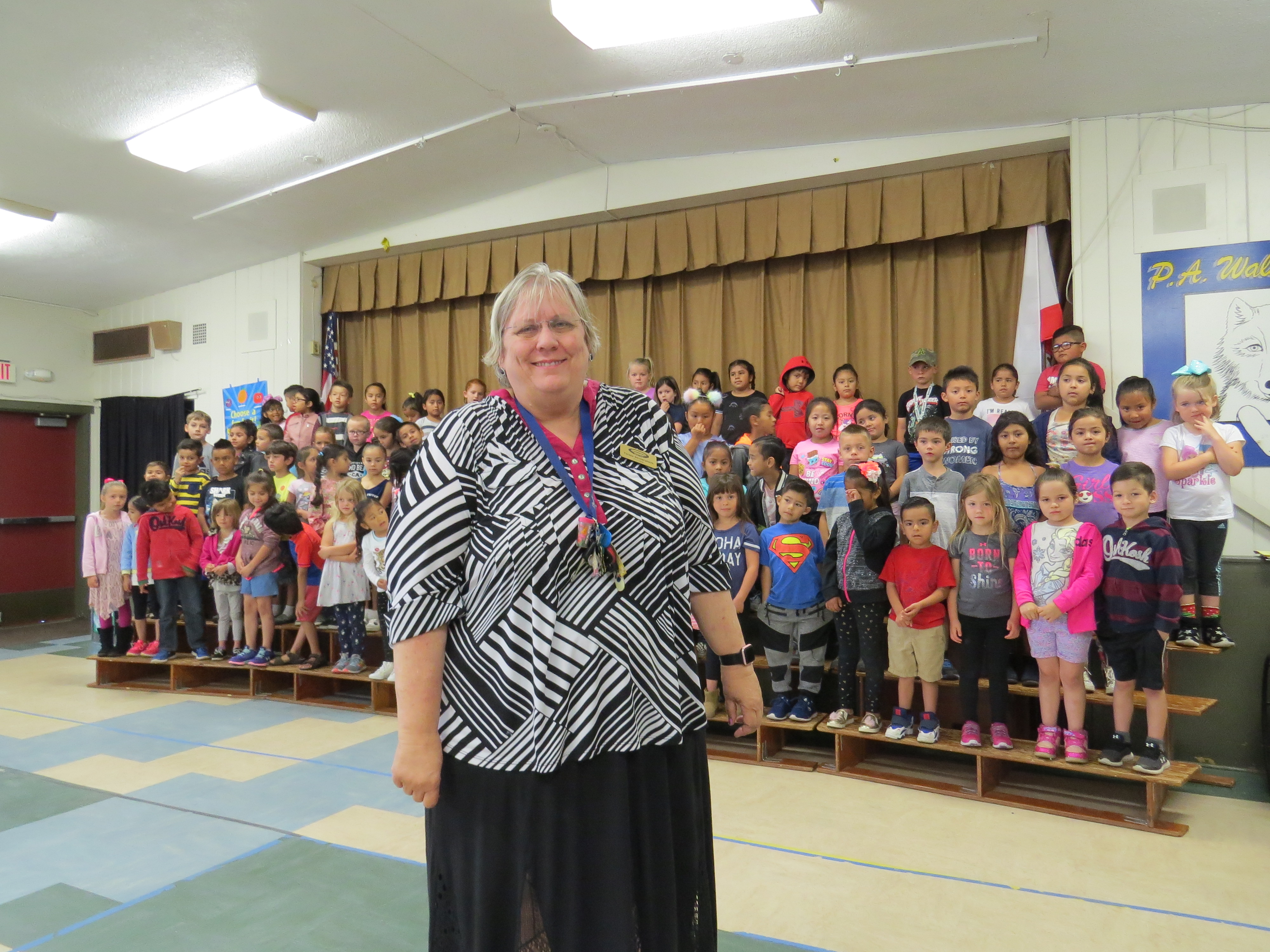 With bittersweet emotions, Teresa Sermersheim said goodbye to the P.A. Walsh STEAM Academy community June 7, the last day of school. At a barbecue on campus, students, parents and staff gave the retiring principal a warm send-off at the end of her nearly three decades as an educator in Morgan Hill.

Sermersheim started her career as a teacher at Burnett Elementary School in 1990. The Morgan Hill Unified School District closed that campus, later converting it into Central High School, and transferred her to P.A. Walsh. She eventually decided to take on the task as the school’s principal of leading the education of about 475 students with a staff of about 50.

With a countdown of a few weeks to her retirement, Sermersheim met in May with four P.A. Walsh STEAM Academy fifth-graders —  Makenzie Parente, Ava Navarro, Kawika Lafontine and Seth Hendersen — to answer their questions on her career in education for this story. The students and principal sat at a round table in her office as they chatted about her life, her love of learning, and how she plans to fill her time. 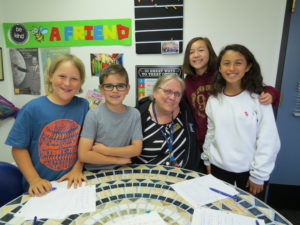 Working with young people over the years, Sermersheim has seen the struggles many of her students  face when their parents find it hard to afford the basic needs.

“Some of the most challenging things I’ve faced have been when I know that a family does not have enough food,” she told the four fifth-graders in the round table discussion. “It makes it hard to care about the multiplication tables if you don’t have enough to eat. And those kinds of things really get to me. And that’s why I keep gift cards at my desk so that if somebody needs food I can help them.”

Thanks to Sermersheim’s efforts, P.A. Walsh has for several years worked with Second Harvest Food Bank, which comes to the school bringing fresh produce and other groceries for families that need assistance.

“I don’t want anything to stop students from learning.”

She told the students about her plans to stay active in her retirement years. She’ll have more time to spend with friends and families, especially her 23-year-old daughter, Flori, whom she adopted from Guatemala.

McKenzie asked her what hobbies she enjoys.

“I haven’t really had a lot of hobbies outside of school because I work a lot. But I decided I need hobbies,” Sermersheim said. “So, get this: I’m going to paint rocks. Doesn’t that seem really funny and really different from being a principal? I love rocks. I have rocks everywhere. But the ones that are plain, I’m going to make them not so plain with pens and paint.”

She also plans to volunteer her time teaching at the Learning & Loving Center in Morgan Hill. Fluent in Spanish, she’ll help immigrant women and their children master the English language. And she has applied to be a foster mom to homeless kittens. 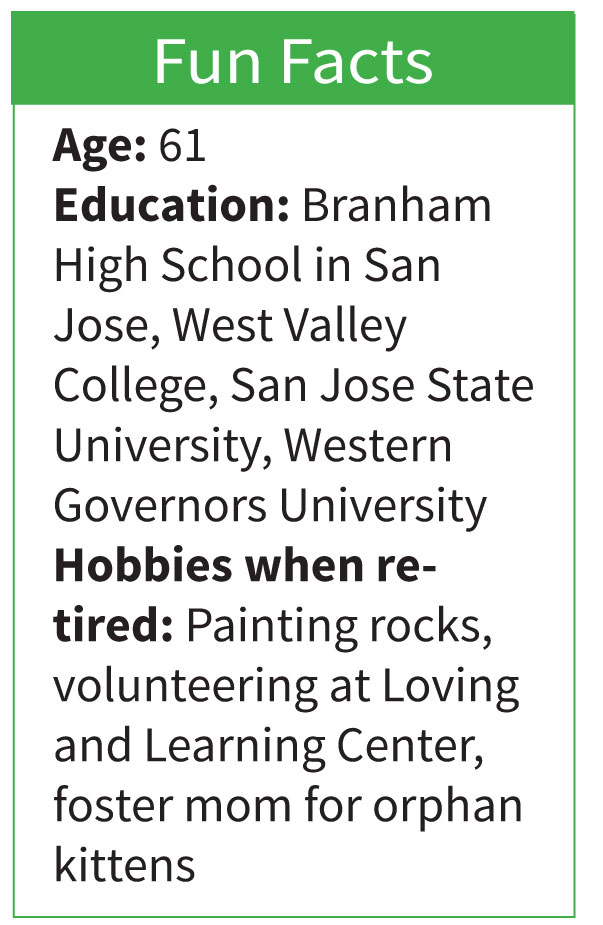 “They’re so small and cute. And some of them are too tiny to leave their mom but they don’t have a mom,” she said. With her two sisters and daughter’s help, she’ll now have time help care for kittens.

“Kittens make you happier,” she said.

Sermersheim described her career in education as a staircase and she has been going up the steps for many years.

“Now I feel like I’m right here,” she said. “I’m at retirement stage and I feel like I’ve succeeded. I love it, but now I need to go to the next stage. This is a good time for me to retire”

She hopes to stay in contact with her former students. “One of the things I love is that I see kids, my former students, and they recognize me,” she said. “I don’t always recognize a 32-year-old when they were eight when I had them as a student. But I love seeing people in town. So I want everybody to know they can come up and say hello. It’s a fun thing for me.”

Sermersheim related to the four fifth-graders how young people in her life have helped her learn important lessons. Years ago, she had been reading a story aloud to a group of Spanish-speaking students who were learning English. Sharon Bell Mathis’s children’s book “The Hundred Penny Box” was about a great-grandmother who had a penny for every year she was alive.

As she was reading the book, the emotion of the story got to her and her eyes started tearing  up. Two boys in the group started writing notes to each other. Thinking they were misbehaving, she got upset. It was an emotional moment, but she decided to remain calm and ignore their actions and continue reading to the class. Soon after, one of the two boys came with a Kleenex box and set it next to her.

Later, Sermersheim saw the note in the trash can. She read his words written in Spanish: “Do you think we should give the teacher a Kleenex?”

The kind gesture impressed her. It served to remind her not to assume the intentions of other people’s action. She was grateful she hadn’t scolded them in front of the other students. “That taught me to always be patient. They were being polite,” she said. “That little paper means a lot to me and I still have it. It was many years ago in the 1990s and it taught me that I always have to be patient and calm.”

“She’s a fair and understanding person. She’s really nice. I used to do the announcements for the school sometimes and she was very nice about it and we had a nice conversations for a couple of minutes afterwards.”

Ava Navarro described an incident where one time she had a problem and Sermersheim helped her.

“Usually I’m not very comfortable talking to adults, but I knew I could always talk to her for the amount of understanding she has and patience she has,” she said. “I would talk to her and she told me she would understand. I told her about my problem and she told me it would be OK and I believed her because I have trust in her.”

When Kawika Lafontine was in kindergarten, he drew a picture of stick figures and gave it to Sermersheim. She treasures it as a happy memory and brought it out to show the four students. The words said: “Hiye Ms. Sermersheim. You are soper doper nice. Your asum. Hiye five.”