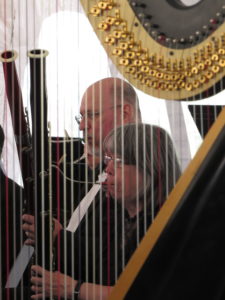 At the symphony’s annual board meeting May 22, he shared with the musicians and board members the plan for the four main concerts.

The Saturday, Oct. 5, concert at Gavilan College will celebrate the 100th-year anniversary of the community college. It will include a special symphonic piece now being composed by Gavilan music instructor Dahveed Behroozi who is an accomplished jazz composer and pianist.

“We are born under lucky stars because we are in a place of growth and enthusiasm and support at a time when the college is celebrating 100 years — and that collaboration can be electric,” Quartuccio said. “We are going to have a year of the Spirit of Music theme for the wonderful season we are planning and the Gavilan Spirit will be our first concert.”

The fall concert traditionally is a pops concert and will include a “hit parade” of movie music including the “Lincoln Suite” by John Wilson.

Other pieces are still in the process of negotiation. It will also include a George Gershwin’s “Rhapsody in Blue” performed by Bay Area pianist Russell Hancock.

“For this concert, we’re going to really pull out all the stops and make this great,” Quartuccio said. It’s going to be a really, really blow-out experience.”

The Dec. 14 Holiday Concert at Gavilan will include as its main piece Tchaikovsky’s Second Symphony. Other music will include Leopold Mozart’s “Sleigh Ride” and “A Night Before Christmas” with Ted Sanchez narrating. Acclaimed singer Sandra Marlowe will also be performing.

For the March 7 NextGen concert, Gavilan alumni and Morgan Hill resident Chris Niemann will premiere a large scale work based on the land of Oz as depicted in the novel “Wicked.”

He was inspired to write “Ozian Symphony” after he took a literature class at the college and was impressed by the immersive aspect of the timeless story.

“Basically what I’m doing is taking us on a journey through the land of Oz and taking us through all the different themes and stereotypes and then get us back home,” he said.

The May 10 Mother’s Day Concert at Guglielmo Winery will have a Latin theme, Quartuccio said. Music will include Bizet’s “Carmen Suite” and various tango music and possibly Gershwin’s “Cuban Overture.”