Editorial: It’s time for safe and sane laws for the use of weapons

Our hearts go out to the families of Xavier Souto and Brian Light who were victims of a shooting at The Ford Store in Morgan Hill the afternoon of June 25. When police officers arrived shortly after 6 p.m., they found the gunman, Steven Leet, dead on the ground with a self-inflicted bullet wound and a revolver by his side. We share our sympathy with the suspect’s family members as well.

The news of the shooting deaths hit residents of Morgan Hill hard as they learned of the incident. Many of us commented that this kind of workplace killing happens in other places, not here in small town U.S.A. The sad reality is that gun violence in America can take its toll anywhere at any time, including here in Morgan Hill.

The shooting incident occurred as the South Valley prepared for the Freedom Fest celebrations July 3 and July 4. We were planning on writing our editorial for this issue on the pride residents of Morgan Hill, Gilroy and San Martin feel in taking part in the annual pomp and pageantry of American patriotism. Unfortunately, we must acknowledge gun violence has always been part of our American way of life. As of June 28, there have been 6,996 deaths from guns this year (not counting suicides), according to the Gun Violence Archive. This year, there have been 191 mass shootings (four or more people killed or injured). At Habbitts Court in San Jose, five people were killed when a man shot four of his family members and then himself June 23. 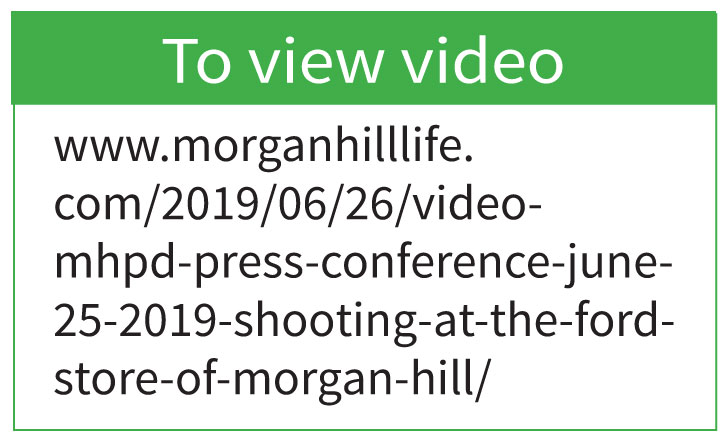 As America remembers this week its birth as a nation founded on the values of life, liberty and the pursuit of happiness, we must remember that gun violence is also a part of our history. It starts with the Boston Massacre when a confrontation on King Street in that colonial city on March 5, 1770 prompted British soldiers to shoot and kill several people while being harassed by a mob. Our history is stained with the blood of leaders assassinated by guns, including U.S. presidents Abraham Lincoln, James Garfield, William McKinley, and John F. Kennedy and activists Martin Luther King, Jr., and Robert Kennedy.

Students in American are at greater risk of being shot than in previous generations. The year 2018 was an especially dire one for gun violence in schools. Data from the Naval Postgraduate School showed that there were 94 school gun violence incidents that year — a record high since 1970, which is as far back as the data goes. This was 59 percent higher than the previous record of 59 in 2006. Incidents are described in the report as “each and every instance a gun is brandished, is fired, or a bullet hits school property for any reason, regardless of the number of victims, time of day, or day of week.” Last year America set a dark record for the number of gun-related deaths in schools: 55 people, including the shooters, were killed. The second-worst annual death toll was 40 in 1993.

What do we do about gun violence? It’s a hot button issue in America, with politicians on both sides loudly proclaiming their opinions and rousing their supporters with passionate emotions. As we celebrate America’s rights this Independence Day with parades, family picnics and fireworks displays in the July 4 night sky, let’s also consider the right every resident of our country has to be safe from gun violence. Just as we have “safe and sane” fireworks laws intended to keep us from getting hurt or killed by the explosive energy of pyrotechnics that are too powerful for untrained people to handle, we also need safe and sane laws for the use of weapons to prevent more tragedies such as the one at The Ford Store.

Two good men will never again be able to celebrate Independence Day with their families because their lives were tragically cut short by gunfire. It’s time we demand real action from our leaders. That will only come when we engage in an honest and open dialogue based on the facts of gun violence and not scaremongering by lobby groups.

Our nation’s political leaders can — and must — come together in a spirit of cooperation and collaboration to protect life, liberty and the pursuit of happiness from gun violence while also upholding Second Amendment rights. It’s time for safe and sane laws for the use of weapons in America.