We heartily congratulate Steve Tate who will be receiving the prestigious Leadership Excellence Award from the Leadership Morgan Hill program July 20 at Guglielmo Winery.

For nearly three decades, Tate worked for his fellow Morgan Hill citizens in local government. At the Dec. 12 city council meeting he stepped down from 27 years of public service, the past 12 as mayor. During the final moments he sat on the council dais, he described why he gave so much of his time and energy to the community. “It’s all about the people. I love this job,” he told the audience.

Tate exemplifies the true spirit of leadership, so his receiving the LEAD honor is a well-deserved tribute to his years of public service. He gave countless hours at meetings and dealt with the stresses of hard decisions because he loved the job and serving the city. He also worked well with people — the city staff and fellow council members as well as people in the community and on commissions.

When Tate and his wife, Jennifer Tate, moved from Walnut Creek into their Holiday Lakes home in August 1977, Morgan Hill was still a primarily rural city of about 12,000. Only two traffic lights were in town, both on Monterey Road. Tate had a career in marketing at IBM. 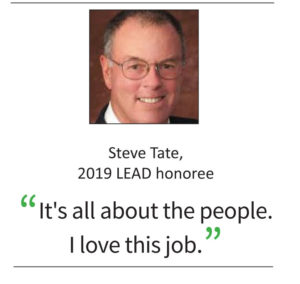 Tate’s interest in local politics started when he served on a General Plan Update Committee in the 1980s. It sparked his interest in ensuring the city grew in a way that protected its quality of life. In 1991, he became a commissioner on the Planning Commission and served seven years. In 1998, Tate was elected to the city council. Working with then-Mayor Dennis Kennedy, the next eight years were filled with work in public building projects including the Outdoor Sports Center, the Centennial Recreation Center, the Community and Cultural Center and the new library. Voters put Tate into the mayoral seat in November 2006.

Tate also stays active as a member of the Rotary Club of Morgan Hill, especially helping its Interact program with local high school students. He enjoys an occasional business ribbon-cutting and networking mixers with the Morgan Hill Chamber of Commerce as well.

Like Mayor Kennedy before him, Tate served the city as an elected official with a goal beyond personal gain or ego. He believed in working to protect and enhance the quality of life in Morgan Hill by giving his fellow residents visionary leadership. That’s a quality that’s increasingly rare during these turbulent times. Unlike so many politicians who are controlled by outside special interests, Tate put the people first.

Tate’s leadership skills grew because he believes leader are not born but made. He continued to learn throughout his years of public service. The best elected officials understand that the art of leadership is a never-ending process of mastery. That’s why they put themselves through leadership training programs or learn from mentors. Tate went through Leadership Morgan Hill. Later, he served as its board president  and received its Distinguished Alumnus Award in 2016. (Dennis Kennedy went through a similar leadership training program in San Jose when he worked for IBM.)

We encourage people who live and/or work in Morgan Hill and want to grow in their leadership skills to consider joining Leadership’s 2020 class. Visit www.leadershipmorganhill.org to learn more about this excellent way to enhance leadership skills and connect with the community.

We especially encourage current Morgan Hill Mayor Rich Constantine to join the 2020 class. We see opportunities for him to grow personally and professionally in the important position of heading our city’s government.