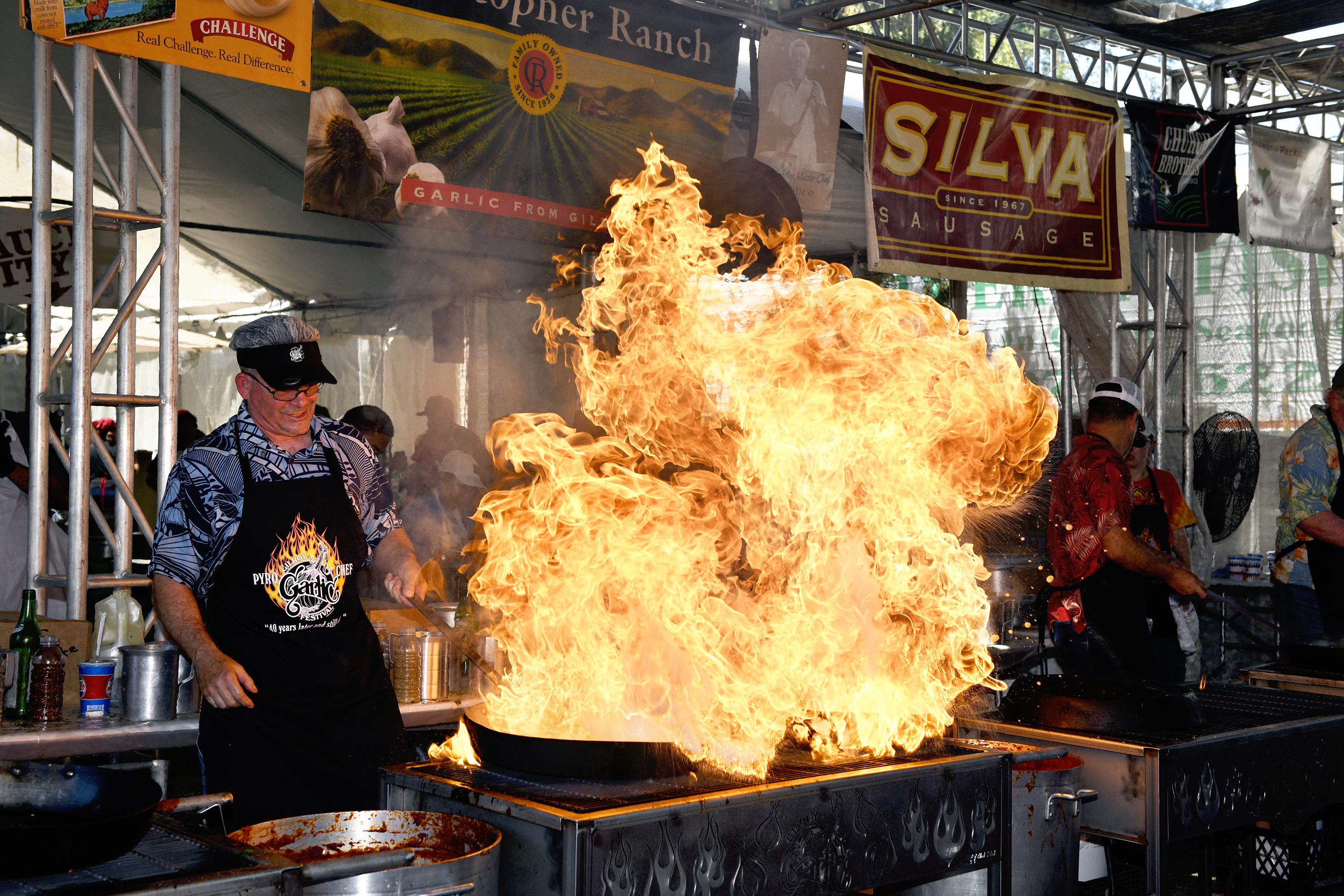 Vistors at this year’s Gilroy Garlic Festival will discover a makeover at the July 26-28 event at Christmas Hill Park.

With the goal of creating a better guest experience, Gilroy’s gala to the stinking rose will provide some new options for its 41st year. These include a Saturday night concert featuring headliner Colbie Caillat, revamped seating for the cooking competitions, a diverse celebrity chef lineup, more streamlined food purchases, a new signature cocktail, an additional parking area, and a change in the festival’s hours. Elements like Gourmet Alley’s renowned pyro chefs, the Garlic Train, the army of volunteers that make the festival possible, and many other favorite traditions remain. 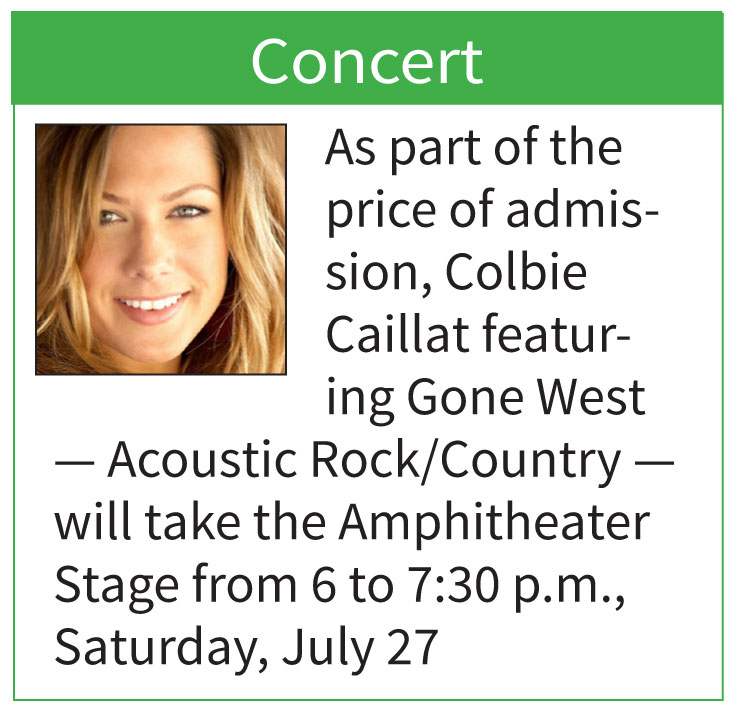 “Every October, November, and December, we think about how we can tweak it every year, how we can make it better,” said Brian Bowe, the festival’s executive director.

Katherine Filice, who works with the festival’s public relations, added, “The board of directors has created a task force to create a really great guest experience. They’ve made a lot of changes and spent a lot of energy looking at the details and approaching the festival from the guest’s eyes. For example, not having to leave the amphitheater to get a treat is a big deal. Being able to go get a drink, and some food, and enjoy this music is going to be so much nicer. And even being able to walk up to the cookoffs … all these task forces have taken a hard look at the festival and said how can we make it an even better experience?”

Here are some highlights of this year’s big event:

“Colbie Caillat and her group, Gone West, are going to be an amazing edition to the festival lineup this year for entertainment,” Bowe said. Attendees will recognize her hits “Bubbly” and “Realize” and enjoy the country sounds of her new group, Gone West, for a different vibe than previous festivals have offered.

“Just for this purpose we’re staying open an hour later on Saturday evening so the crowd can stick around and maybe get a second trip to Gourmet Alley, get some great food, maybe get some dinner,” Bowe said. The concert is included with the price of admission, which means the amphitheater should be packed on Saturday evening. 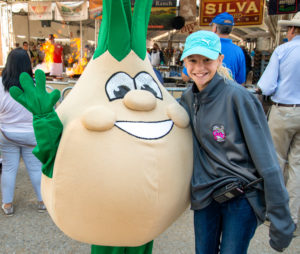 The seating for the Challenge Butter Cook-Off Stage, will be a little different this year as well. Some of the bleachers will be removed from one side to open it up. The idea is to allow more people to walk up, see everything, and get closer to the action.

“We’re going to increase the standing room because we find that not everyone wants to come in and find a seat and commit to an hour or half hour,” Bowe said. “They kind of just want to wander in, see what’s going on, enjoy it for a little while, and then go off and enjoy the rest of the festival. We’re trying to please everyone this way and I think it’ll be a good mix.”

What’s the festival without the celebrity chefs? There’s an all-new lineup this year, including James Beard Award-winning chef, restaurateur, and Top Chef head judge Tom Colicchio, who will host the 41st Annual Great Garlic Cook-Off on Saturday. Another exciting addition is local favorite Alexander La Motte, executive chef at Rosewood CordeValle Resort in San Martin. He’ll be emceeing the Garlic Showdown competition for professional chefs on Sunday. Other chefs in attendance will include Gerron Hurt, the 2018 MasterChef winner, and “Real Housewives of New Jersey” personality and cookbook author Teresa Giudice, who will appear on Saturday. 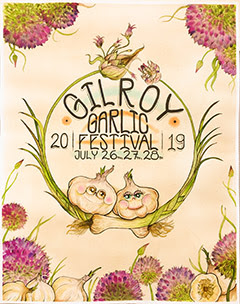 One change that is sure to be popular is the new food buying setup. On the Ranch side of the festival, guests will have an opportunity to order a variety of foods from a single line, rather than having to wait in individual lines for different items. Windows on the Park side of the festival will still be a la carte, but this change should accelerate the food buying process.

“We had to re-envision the way we do it,” Filice said.

Visitors can get in one line and get whatever they want to buy in one purchase, Bowe said. “It seems like such a simple thing. But the volunteers have been trained for many years to do a single service line,” he said. “So, it’ll be a logistical challenge for them. But I think we’ll be able to pull it off. And it’s going to make for a much better experience for our attendees.”

After the success of 2018’s inaugural cocktail, the Garlic Festival Mule, there will be a new signature cocktail this year, the Whiskey Daisy. “We’re going from two booths to three for cocktails,” Bowe said. Booths will be located on both sides of the park, including one by the amphitheater. “Our signature cocktail will be at three different venues this year, and the mule is coming back as well.” 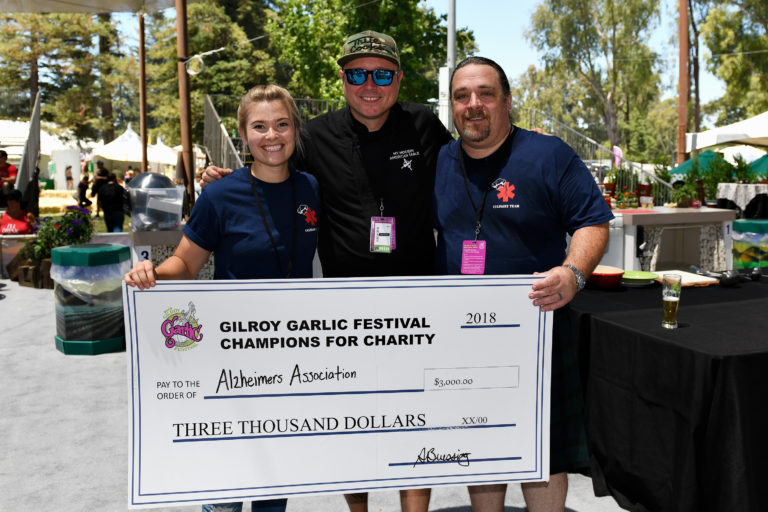 Another welcome change is expanded options for parking. One of the biggest changes this year is a new lot at the northeast corner of Club and Santa Teresa, immediately north of Solorsano Middle School.

“That property is close enough that people can walk into the festival. We’ll have shuttles, but you can jump right on the hiking trail and go in,” Bowe said. “We still have a lot of our parking down on Day Road, with the shuttle bus rides. And we’ve got expanded parking at Gavilan College, and overflow parking at Gilroy High School.”

Due to the Colbie Caillat and Gone West concert, the festival will close at 8 p.m. on Saturday, which is an hour later than usual. “But it’s a nice hour because by then the weather’s going to be very comfortable, people can just relax and enjoy the evening concert,” Bowe said. “Shuttle buses will run an hour later, parking an hour later, and everything like that. So, we’ll make it very convenient for our attendees to stay an hour later Saturday.”