Theater Review by Marty Cheek: “Man of La Mancha” teaches timeless lessons in mastering the art of being human 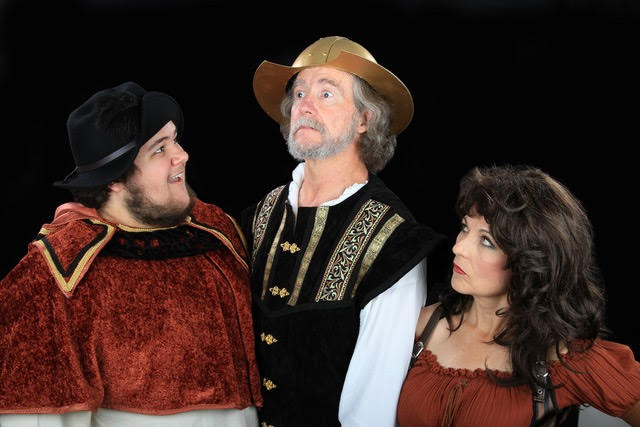 First produced on Broadway in 1965, the musical “Man of La Mancha” holds lessons for all of us today on mastering the art of being human and what it means to be chivalrous. San Jose Musical Theater’s version of this show is well worth watching for the beauty of the performances as well as the play’s ageless message of an individual’s striving against all odds to make life better for all people.

“Man of La Mancha,” opened  July 12 for two weekends only.  This Tony-Award-winning musical will be presented on the Evergreen Valley College Theater’s stage Friday July 19 and Saturday July 20 at 8 p.m. and a Sunday matinee show Sunday July 21 at 2 p.m.

People involved in the show from the South Valley include Gilroy residents Ingrid Rottman, who serves as the house manager,  and performers Chris Brady (who plays Sancho Panza), and Jordan Reyes (who plays the Captain of the Inquisition). From Morgan Hill, were Joy Reynolds, Lori Foster and Marilyn Pifer who all worked on the props, costumer Michelle Griffin, stage manager Bridget Harnett and performers Megan Griffin (who plays Antonia) and Christine Carrillo (who plays an Inn Wench). 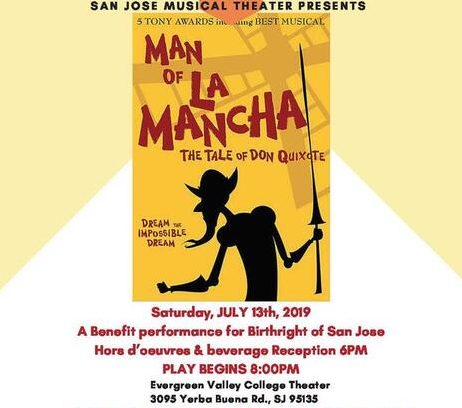 Scott Whisler plays both Cervantes and the “mad” knight Don Quixote with an energetic resolution not to let those in power destroy his impossible dream to fight for the right causes. Chris Brad as Sancho, a farmhand whom Quixote picks to serve as his squire, uses his amazing vocal ability in the songs of the show to playfully counter with a dose of amused reality the illusions of his master’s madness. The talented Molly Thornton performs the role of the irritable wench Aldonza whom Quixote rechristens Dulcinea. Her acting skills helps the audience believe that she transforms by the end of the play into the beautiful lady the Spanish knight envisions.

San Jose Musical Theater was founded five years ago with the mission “to present high-quality musical theater at affordable prices to San Jose and Silicon Valley Area audiences . . . and to positively enrich people’s lives and help create a vibrant community filled with cultural opportunities which enhance artistic development.” I hope the high quality of the set, costumes, direction, musical talent and performances of their summer show “Man of La Mancha” serves as an indication of how SJMT will grow in the coming years. It is well worth a 30-minute drive to San Jose for the opportunity to enjoy this show and learn how Don Quixote’s message of chivalry and gentleness toward all is as vital today as it was 400 years ago.