More than $620K raised for victims of Garlic Festival shooting 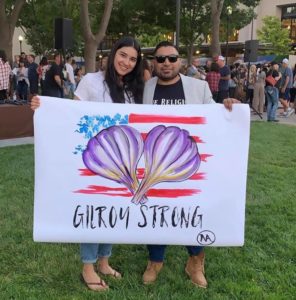 T he South Valley is still recovering from the shock of the tragic mass shooting of July 28, 2019 on the grounds of Christmas Hill Park during the closing hour of the 41st Annual Gilroy Garlic Festival.

Since then, the community has raised more than $620,000 for the victims of the shooting, according to Donna Pray, executive director of the Gilroy Foundation, which is overseeing the fundraising.

Within days of the tragic shooting, she said, they had five groups come into the office carrying cash or bringing them a check from money they have raised. Others have called to set up a time to come by with their donation.

“Our Bay Area sports teams have pledged their support; Silicon Valley corporations have let us know they will be sending donations; Realtors, business owners, travel groups, artists, families, fitness centers … and on and on … everyone wants to do something,” she said in a press release.

As they move forward with the process of collection of donations, they said they are looking ahead to the next step: providing financial relief for victims. Protocol and applications forms are being developed. More information will be available to the community very soon.

If you would like to make a donation, know that 100 percent of what you give will go directly to the victims.