Rally included many of the more than 800 employees 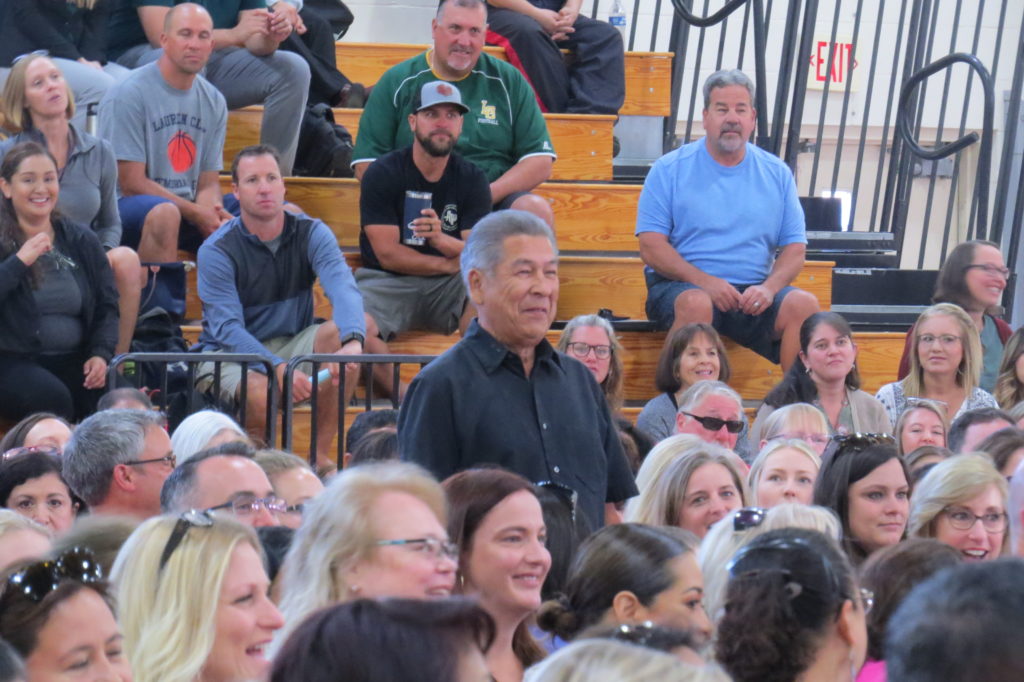 Photo by Marty Cheek Chuck Garcia receives applause at the Morgan Hill Unified School District Aug. 12 rally for working 45 years in the district. He is a teacher at Paradise Elementary School.

Turning a “summer of tragedy” into a school year of triumph served as one of the themes of the Morgan Hill Unified School District rally held Aug. 12 at the Sobrato High School gym.

The annual event was held a few days before students stepped into their classrooms for the first day of school for the 2019-2020 year. The rally included many of the more than 800 district employees, including teachers, support staff, and administrators, as well as board trustees, who listened to various speakers provide words of encouragement. They stood in front of a “I AM MHUSD!” banner made during the summer as part of an arts program. Elementary students made a mosaic of their drawings based on the values of the district such as respect, integrity, service, compassion and diversity. 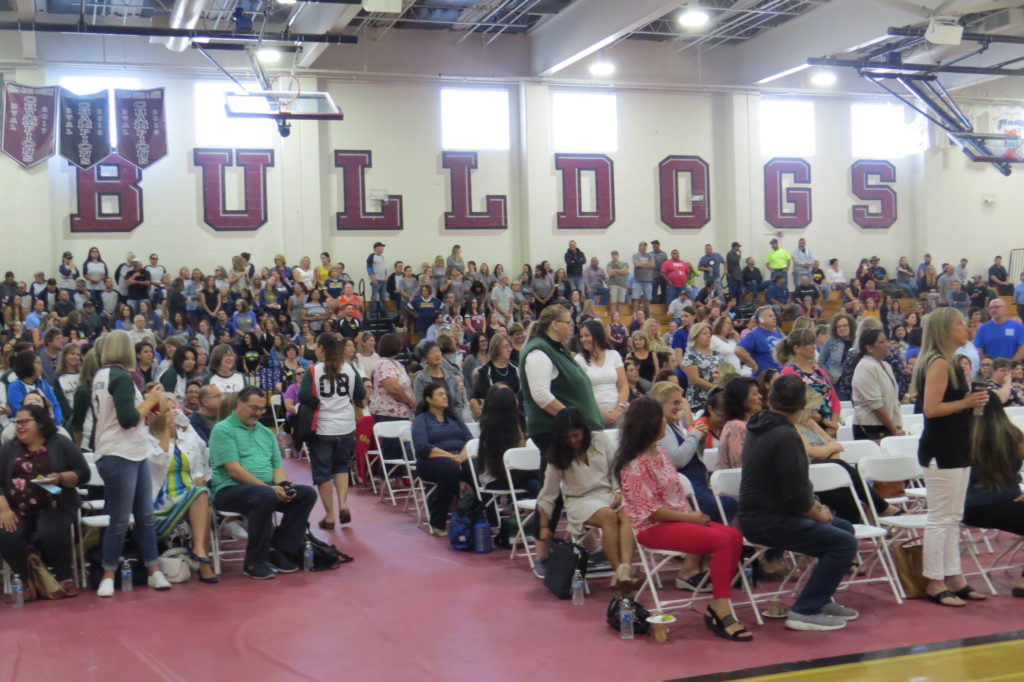 Photo by Marty Cheek
Some of the more than 800 Morgan Hill Unified School District employees gather in the Sobrato High School gym for a rally a few days before school started for the 2019-2020 year.

Many of the speakers spoke of the emotional challenges the school community now faces following two traumatic shooting events, one at the Ford Store of Morgan Hill and the other at the Gilroy Garlic Festival.

“It was a very rough summer locally. We had a summer of tragedy in this area,” MHUSD Superintendent Steve Betando told the crowd.

He acknowledged the school counselors and other support team members who made themselves available for psychological help for students and others following the garlic festival mass shooting in which four people, including the shooter, died and a dozen other people were injured.

Betando especially put a spotlight on the MHUSD school bus drivers who in the aftermath of the shooting helped to transport festival guests to Gavilan College’s campus and other locations to be relocated with family and friends. The week prior to the garlic festival the charter bus company hired to transport people between the parking lot and the festival entrance had pulled out of its contract. The festival organizers expected a big crowd and called the school district a few days before the festival to ask for assistance to meet the demand.

“We had our drivers readily jump in to help. This in and of itself actually shows that they value connections and the needs of others and the willingness to help,” Betando said. “But, of course, as we now know, their help in this story didn’t stop there.”

Five school district drivers were at the festival site during the shooting incident. These district employees opened their buses to provide refuge in the midst of panic. Their communication and action in coordination with each other and with law enforcement was immediate in what was going on there, he said.

“They assisted where it was needed and gave direction to others and included people into their buses in the midst of chaos,” he said.

He asked them to stand and called out their names to a round of applause: Mada Corrigan, Greg Lee, Saul Padilla, Juana Marin and Karen Godwin.

School board president Mary Patterson, who has had children in MHUSD schools for 15 years, showed optimism for the school year in her talk to MHUSD employees.

“I want to say I know the year ahead is going to present challenges and the year ahead is going to present a lot of success,” she said. “Every day at every turn, I’m delighted about what’s happening in the lives of my children and the lives of the children who are served by the district and from the staff who I have the honor of knowing. And every day I have optimism for the future of our community and the future of our country because of what you’re doing with our children every day. I have eternal gratitude as a parent and as a board member for every day that you spend in your jobs.”

“One of the things that I would like to get across is that I think it’s really important that it’s not just about education in books like common core math, but teaching our children to respect each other, to reach out to each other, to give helping hands to those who are around us,” she said.

She described the importance of teaching students to see signs of when someone might need more help than others.

“So until the time that we don’t have to worry about mass shootings, our children being afraid to go to school, things happening that we all have no control over, that part I actually hate about my job,” she said. “But I know one day, hopefully before I retire in 14 years, eight months and three days, that I can stand in front of  you guys and tell you beyond a shadow of a doubt that I love my job 150 percent because we’ve all achieved what I think is important, which is where everybody gets everything and it’s a safer place for our children to be in.”

Jim Levis, an eighth-grade science instructor at Britton Middle School, on Aug. 6 stepped into the role of interim union president for the Morgan Hill Federation of Teachers, replacing Gemma Abels. He described how it was the job of teachers to not only provide academic knowledge but provide students with a safe, supporting, and accepting environment in which to learn, and to give social and emotional support when they need it.

“For some of our students, we are the only stable factors in their lives,” he said. “We must also reflect on the tragedies of both Morgan Hill and Gilroy communities that we experienced during this summer. We also must realize that some of our students and some of our staff have still not fully processed the (garlic festival shooting) events of just 15 days ago. We must be prepared to provide the necessary support for each and every one of the persons affected to help them be able to cope.”

He emphasized to teachers and other MHUSD staff the importance of taking the time to connect with students each day.

“Maybe it’s on the bus. Maybe it’s in the office, on the playgrounds, on the halls or in the classrooms,” he said. “We have 9,000 students from ages five to 18 who come from a variety of backgrounds and family situations — and each comes to us with their own specific talents and desires, challenges and needs. I believe they also come to us with certain expectations and rights that we must fulfill. They must feel safe, to be respected, to be able to express themselves, to be able to learn and, of course, to be able to make mistakes and, hopefully, learn from those mistakes.  It’s the job for each person in this room to guide each students and provide them with the opportunities that education affords.”