Editorial: America is a land of liberties because it is a nation of laws One of the most fundamental of liberties we enjoy under the protection of the Constitution is the freedom of our religious choices. The First Amendment secures for Americans the free exercise of religious belief and worship. The Fourteenth Amendment prohibits discrimination, including discrimination based on religious thought, by securing for individuals “the equal protections of the laws.”

Despite these noble ambitions for religious liberty, there is a dark side to the American character. Throughout our history, people have faced bigotry and prejudice based on their theistic beliefs. Among the faith groups that have faced the pain of intolerance from fellow Americans are Catholics, Jews, Native Americans and Mormons.

The Jehovah’s Witnesses faced religious intolerance in the early 1940s after the Supreme Court ruled in the case Minersville School District v. Gobitis that public schools could force students to salute the American Flag and recite the Pledge of Allegiance despite the students’ religious objections to these classroom group activities. In small towns across America, Jehovah’s Witnesses were pulled out of their homes and cars and literally tarred and feathered by people who saw their “unpatriotic” views as a threat. Many were pushed to do humiliating things such as kissing the flag and tied up and paraded through the streets. One man was kidnapped and castrated because of his faith in the Jehovah’s Witnesses belief system. 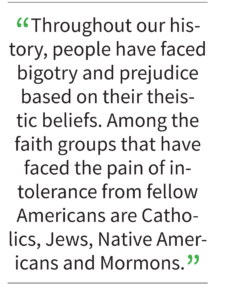 A  2017 survey of Muslim Americans by Pew found that many said they have experienced specific instances of discrimination such as being singled out by airport security, called offensive names or treated with suspicion.

Muslims in South Valley for years have been pursuing approval from the county’s planning commission to construct the Cordoba Center in San Martin, which will include a mosque, community center and cemetery on the site. They have faced much resistance.

Those who oppose this religious center have expressed concerns about the facility including the size of its structures and the potential of well water becoming contaminated. Unfortunately, we must acknowledge, based on written correspondence and verbal communication we have received, that there may be a degree of intolerance among some — not all — people who oppose the project.

For 13 years, the members of the South Valley Islamic Community have strived to get to the point where they can start to build their religious center. The project has faced opposition from a small but vocal group opposed to a local Muslim place of worship.

After Santa Clara County granted a land use permit in September 2012, this group sued the county with a claim it failed to assess the environmental impact of the project’s potential growth over time.

We encourage an open-minded attitude among South Valley residents toward the development of the Cordoba Center. Local Muslims have shown tremendous respect to their San Martin neighbors in ensuring the facility will have minimal impact on their quality of life. We as a community, in turn, must respect their religious liberty and make sure their constitutional rights to freedom of belief is preserved.

In 2006 Keith Ellison, the first Muslim ever elected to Congress (representing a district in Minnesota), took his oath of office with his hand on an English copy of the Qur’an once owned by Thomas Jefferson.

The founding father who penned much of the Declaration of Independence also wrote the Virginia Statute for Religious Freedom, a statement about both freedom of conscience and the principle of separation of church and state. Passed by the Virginia General Assembly Jan. 16, 1786, it serves as the forerunner of the First Amendment protections for religious freedom in the Bill of Rights.

On the wall of the northwest portico of the Jefferson Memorial in Washington, D.C., the great man’s words on freedom of belief are engraved in stone:

“Almighty God hath created the mind free. All attempts to influence it by temporal punishments or burthens … are a departure from the plan of the holy Author of our religion … No man shall be compelled to frequent or support religious worship or ministry or shall otherwise suffer on account of his religious opinions or belief, but all men shall be free to profess and by argument to maintain, their opinions in matters of religion. I know but one code of morality for men whether acting singly or collectively.”