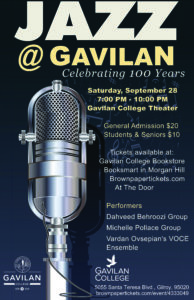 Gavilan College celebrates its centennial all year with a series of special events. Among them is a concert bringing to the campus many top-shelf jazz musicians to entertain with tunes from the last 100 years.

The concert will feature the Dahveed Behroozi Group, the Michelle Pollace Group, and the Vardan Ovsepian’s VOCE Ensemble. It starts at 7 p.m. Sunday Sept. 28. General admission is $20. Students or Seniors tickets price is $10.

“This year we’re going to do the concert with a little difference,” said Dahveed Behroozi, a pianist and composer who also instructs music at Gavilan. “The last few years we’ve called it a jazz festival, but this year we’re calling it [email protected]: Celebrating 100 Years  .  .  .  We’re going to be playing material from the last 100 years of American music including tunes from the American song book, such as musical tunes like 1920, 1930s 1940s and 1950s.”

In 2012, Dahveed released his first record “Games” and is scheduled to release his second album in early 2020.

“It’s a really unique voice ensemble, something you wouldn’t typically hear in this area,” Behroozi said.

The annual jazz concert serves as a fundraiser for the college’s music department, he said.

“The more people we can get out there, the stronger that the music department gets. We want to bring more visibility to the music program at Gavilan,” he said. “The concert has really been growing a lot these last few years and we want to continue that. It’ll be a night not to be missed.”