Photo by Marty Cheek
From left to right, students Nicki Kantor and Riley Barela, of San Martin Gwinn; and Sofia Ramirez and Bella Ramirez, of Sobrato High School at the Sept. 20 rally for climate change action at the city hall plaza.

Millions of children and teens in 130 countries took to the streets Friday, Sept. 20, to express their fears for the future and encourage politicians to take radical measures to combat climate change. They included local people from Morgan Hill, Gilroy and San Martin at a Morgan Hill City Hall Plaza rally who expressed their hope for real action from lawmakers.

The youths were inspired by 16-year-old climate activist Greta Thunberg who last year began demanding more action from her government on climate change by skipping school and protesting in front of the Swedish Parliament.

Young people have the highest stakes in a future where Earth’s environment is transformed by a climate catastrophe caused in part by carbon emissions, said Hassti Tirgardoon, 15, a student at Gilroy Early College Academy. That’s why she and other members of the Young Women Leaders Conference organized the rally to put a spotlight on the young people’s desire for change.

The release of carbon emissions into the atmosphere from burning fossil fuels as well as deforestation is changing Earth’s environment through global warming and the acidification of the oceans to a point where the quality of life for people will diminish, she said. Photo by Marty Cheek
Millions of people in 130 countries took to the streets Sept. 20 to encourage politicians to take measures to combat climate change. It included people from Morgan Hill and Gilroy at a rally in Morgan Hill. The youths were inspired by 16-year-old Swedish climate activist Greta Thunberg who last year began demanding action from her government.

“The planet is our home and there is no planet B,” Tirgardoon said. “Our generation needs to understand that our parents and our grandparents, they may not see from our perspective that we still need to live here. We still need to have families and grow up and live our lives. So, we need to get involved.” Amirah Alexander, 15, a student at Mount Madonna School, joined Young Women Leaders this year and became involved in the local rally because, from her school experience, she believes protecting the planet is an imperative action for the quality of life of her generation and future generations.

“I grew up in that community and I have always been passionate about climate change and the environment and the planet,” she said. “So this is a great opportunity for me to get involved.” 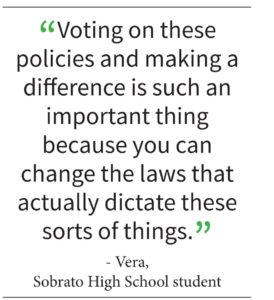 Activist Thunberg serves as an influential figurehead and voice to inspire youth like Tirgardoon and Alexander. Three days after the global protests, she addressed the assembled world leaders at the 2019 UN Climate Action Summit. She accused them of stealing her dreams and her childhood by their lack of taking real action to combat  climate change’s damage to the environment.

One of the most powerful themes of the youth movement is that today’s young people have the highest stakes in a world reshaped by climate change. They feel angry by the lackadaisical approach governments and institutions have addressed the serious challenges humanity faces.

At the rally, organizers invited people who attended to express their concerns about climate change. Among them was Ben Peterson, a sixth-grader at Britton Middle School who aspires to be a scientist to protect our planet.

“Even though I may just look like an 11-year-old kid doesn’t mean that I can’t make a difference — just like you!” he told the attendees. “You see, I want to be a marine biologist when I grow up, and just the thought of all the waste in the ocean sort of just makes me want to cry sometimes. So, I think we need to stand up and make a difference.”

A Sobrato High School junior who introduced herself as Anna Marie said humans need to take action immediately to save the world from the global carbon crisis.

“I think about the future, and I think about my future,”  she said. “In my future, I want to have kids, I don’t want to bring kids into this. So, I think we need to make a change so that people of my generation can have families. And if nothing changes we’re not going to have any of that.”

A Sobrato student named Vera shared her thoughts on the democratic process of voting as a way to encourage politicians to be more active to save the planet.

“People our age won’t be able to vote in the next election because we’re going to be 17. So, we’re almost there, but not quite,” she said. “Voting on these policies and making a difference is such an important thing because you can change the laws that actually dictate these sorts of thing. Not to get political, but we know that (some) people in power don’t believe in climate change, which is ridiculous because there is so much evidence to support all of the things that are happening to our planet every single day. So, yeah, vote.”

Among the invited adults who spoke about climate change was John Laird, Secretary of the California Natural Resources Agency from 2011-2019, Morgan Hill City Councilmember Rene Spring, and Lesley Miles, co-owner of Weston Miles Architecture. Dozens of Specialized Bicycle Components employees got on their wheels and rode as a group to the city hall plaza to join the rally. Among them was Mike Sinyard, founder and chairman of Specialized, who briefly addressed the crowd.

“We have a whole team here from Specialized, and we are all here to support all of you kids in what you’re doing because you know what is important,” he said. “In life, there is nothing more important than clean air to breathe, clean water to drink, and an environment where we can survive. So, we totally all support you — and this is only the beginning. Thanks for putting this on.”