Many at meeting say Trammell Crow Co. intends to build a distribution center 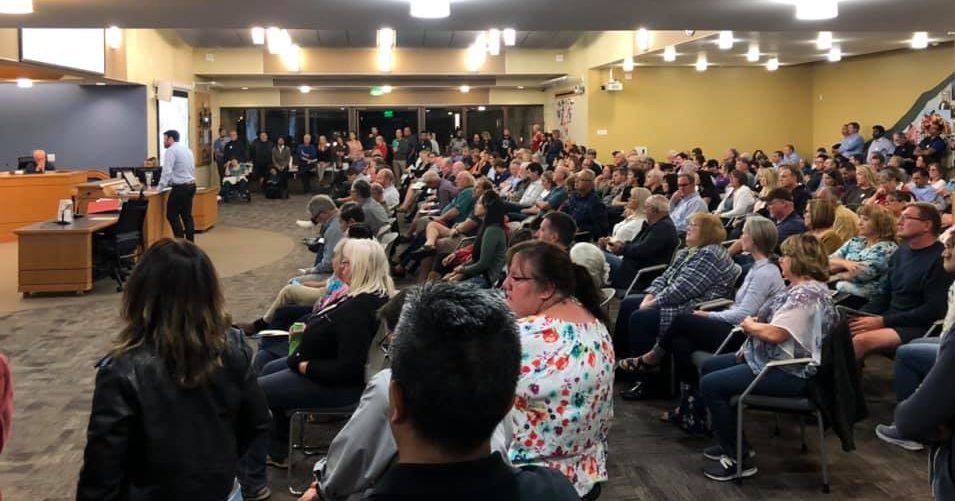 A packed Morgan Hill Council Chambers listened to applicant Trammell Crow Company’s proposed development, then some spoke out against what they believe will be a distribution center.
Photo courtesy Mellea McLaughlin

Residents in a standing-room only Morgan Hill Council Chambers gave representatives from commercial developer Trammell Crow Company an earful Oct. 15 about what they contend is going to be a huge warehouse and distribution center on the southeast corner of U.S. 101 and Cochrane Road. 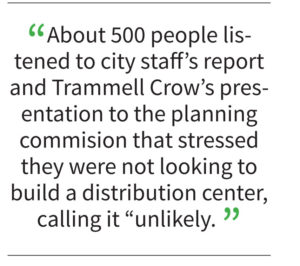 About 500 people listened to city staff’s report and Trammell Crow’s presentation to the planning commission that stressed they were not looking to build a distribution center, calling it “unlikely.”

But residents weren’t believing it.

“Any tenant that requires that many loading docks does not belong in Morgan Hill,” he said. “The project submitted by the developer is not good for Morgan Hill because it could become a distribution center.”

But Will Parker, CFA with Trammell Crow, said Morgan Hill is not a distribution market.

“We have built distribution centers, but they are focused on the 880 corridor or in the Central Valley,” he said.

About two dozen people spoke out against the project, most of whom believe a distribution center will be built. They complained about the increase in traffic, pollution and congestion that would significantly impact their quality of life.

The proposed project prompted some residents to form the Morgan Hill Responsible Growth Coalition, a registered California public benefit 501(c)(4) nonprofit organization that has strongly advocated against the project.

“We are not fighting our city, we are fighting for our city,” said Linda Knowlen, one of the organizers of MH-RGC in an interview in late September. “We are not trying to divide the community. We’ve learned too much to believe it’s going to be advanced manufacturing.” 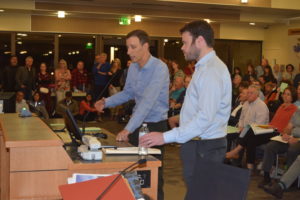 Based in Dallas, Trammell Crow Company is asking the city to amend the property’s zoning, which currently allows for commercial, administrative office and industrial use on 60 acres. They want to rezone a majority of the land for industrial use that they say will be used to lure an advanced manufacturing company to Morgan Hill, bringing with it significant economic impact and high paying jobs.

Concurrently underway is an environmental impact report which studies the potential impacts of the project And, any private landowner who proposes a project is subject to the California Environmental Quality Act. CEQA is a statute that requires state and local agencies to identify the significant environmental impacts of proposed developments and to avoid or mitigate those impacts, if feasible.

The draft environmental impact report is expected to be released for public review in December. The report will also look at alternatives to the proposal. That will include a “reduced development scenario and a no development scenario,” according to city planning officials.

One of the frustrations expressed by residents and commissioners is that the developer does not yet have a tenant or tenants lined up, though Trammell Crow said they have several in mind. Parker said some of the companies most active right now in advanced manufacturing are Google, Tesla, Apple and Facebook.

There will be trucks at the site because distribution is a part of any advanced manufacturing project, Parker said.

Commissioner Liam Downey asked Joe Borowski with Morgan Hill Responsible Growth Coalition what the group would find acceptable. He said they, too, want sustainable high-quality jobs. “We’re not against development, but we do not want the high-density truck docks,” he said.

Contacted after the meeting, Parker said  his team thought the Planning Commission came prepared for the meeting and asked thoughtful questions.

“It’s clear we have to do some work on our end to better communicate our understanding and demand for high-quality commercial/industrial space in Morgan Hill, as well as explain the economic benefits of the project, our vision for the business park and intent for the project,” Parker said. “We respect what the community has to say and look forward to the next steps in the process.”

At the end of the four-hour hearing, the planning commissioners requested they return Oct. 22 to provide their recommendations regarding the project, which will be forwarded to the city council for a final decision.