Your Estate . . . with James Ward: Consider the mental state of elders to avoid being scammed

The Alzheimer’s Association is a good source for finding support groups with experienced counselors. There are two parts to this discussion. One is the clients who come to me, more and more now, because new DNA testing has turned up children they didn’t know about, or confirmed that children and grandchildren they’ve known and raised are not biologically related to them. The new discoveries often lead to estate planning issues, but we’ll leave that discussion for another day.

The other part of this question refers to the aging and weakening mind. What happens as people age? What will happen to you or me? It’s an unknown and we all hope it won’t happen to us — but in many cases it will. Will it start in our 50s? 60s? 70s? 80s? 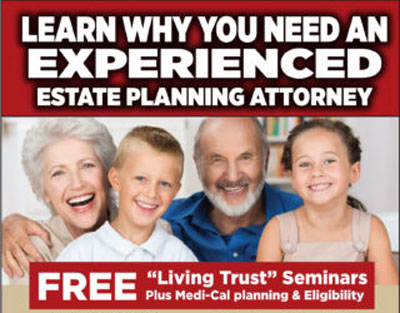 As a person’s mind starts to “slip” in some way, are they more vulnerable to scamming? Less patient? More volatile? More assertive in their denials? More forgetful?

My client who was scammed out of $900,000 said that she had learned her lesson, tightened her defenses, and nothing like that would ever happen to her again. But it did. She refused help with her finances and within three months she was scammed out of an additional $400,000. Wow!

The man wanted his mother to become my client, and he was trying to learn more about estate planning, elder law, and Medi-Cal planning so his mother could have Medi-Cal cover her nursing home costs if she could no longer remain at the assisted living facility.

We discussed her assets, and he said she had no estate planning documents whatsoever, and that, even though he was her only child, and she relied on him for so much, she was reluctant to discuss any estate planning efforts. She was just relying upon her belief that everything would work out OK and her remaining assets would easily pass to him after her death.

After running through examples of other clients, and then relating several stories about the reluctance of my own mother to sign any planning documents, he went quiet for a bit and then leaned across the conference table toward me and said, “I think maybe we have the same mother!”

Ha! No chance of that, but we both had a good laugh at the similarities between our mothers.

I don’t know what will happen to you or me, or to your mother or my mother, but there are a set of known, classical behavior patterns that most aging individuals seem to fit. If you’re experiencing changes with your spouse or a parent, maybe some time spent with a counselor in this field can help. I’ve had clients attend Alzheimer’s support groups to hear the struggles of others and receive advice from experienced counselors, and it gave them a sense of relief and some direction in trying to deal with the issues of the changed and changing mind.

If you’re facing this situation, reach out within your community to find support groups that may be able to help you. The Alzheimer’s Association itself is frequently a good source for finding support groups with experienced counselors. Try it.